The IRS recently determined that Sec. 461, rather than Sec. 404, governs the timing of the deduction for payroll taxes on deferred compensation by an accrual-basis taxpayer.

Generally under Sec. 461(a), a deduction is taken into account in the proper tax year under the taxpayer’s accounting method. Regs. Sec. 1.461-1(a)(2) allows an accrual-method taxpayer to take expenses into account (as a deduction or capital item) in the tax year in which all the events have occurred that determine the fact of the liability and the amount can be determined with reasonable accuracy (the all-events test).

Under Sec. 404(a), compensation paid to an employee under a plan deferring the receipt of such payments is not deductible until paid. However, Temp. Regs. Sec. 1.404(b)-1T, Q&A-2, provides that salary under an employment contract and a bonus under a year-end bonus declaration are not considered paid under a plan, method or arrangement deferring the receipt of compensation to the extent that such salary or bonus is received by the employee on or before the end of the applicable 2½-month period beyond the taxpayer’s year-end; see Avon Products, Inc., 97 F3d 1435 (Fed. Cir. 1996). Thus, if an amount is paid more than 2½ months after the end of the employer’s tax year, it generally is presumed to be deferred compensation and, thus, subject to Sec. 404.

Before the enactment of the economic-performance rules under Sec. 461(h), the IRS had issued Rev. Rul. 69-587, which concluded that, under the all-events test, an accrual-method employer generally cannot deduct payroll taxes payable with respect to vested bonuses and vacation pay accrued but unpaid at year-end until the tax year in which the bonuses and vacation pay are paid.

In Eastman Kodak Co., 534 F2d 252 (Ct. Cl. 1976), the court held that, under the all-events test, the fact of the employer’s liability for the taxes was established as an automatic consequence of its definite and legal obligation to pay the underlying year-end accrued wages, even though no legally enforceable obligation to pay the taxes in issue had arisen by year-end. In Rev. Rul. 96-51, the Service announced its acquiescence in Eastman Kodak. The silence in both Rev. Ruls. 69-587 and 96-51 as to the applicability of Sec. 404 and the divergent conclusions reached by the IRS in the rulings caused confusion for some taxpayers and tax practitioners. In releasing Rev. Rul. 2007-12, the Service amplified Rev. Rul. 96-51 and revoked Rev. Rul. 69-587.

Rev. Rul. 2007-12 Rev. Rul. 2007-12 did not definitively indicate when the liability for
such payroll taxes is fixed under a particular fact pattern. IRS and Treasury officials acknowledge that they have deferred answering the difficult question about the timing of
the liability for payroll taxes on deferred compensation in this ruling. They have also indicated, however, that they expect that, in some cases, taxpayers will be able to meet the fixed requirement of the all-events test of Sec. 461; thus, some taxpayers may be able to accrue certain payroll taxes on deferred compensation paid to employees up to 8½ months beyond the end of the taxpayer’s year-end under the recurring-item exception of Regs. Sec. 1.451-5.

In any event, Sec. 461(h)(1) provides that “the all events test shall not be treated as being met any earlier than when economic performance with respect to such item occurs.” Thus, taxpayers must examine the facts and circumstances of each particular type of payroll tax on deferred compensation to determine whether the underlying payroll tax liability is fixed under the all-events test. See Exhibits 1 and 2, below, which indicate that the Social Security or Old Age, Survivors and Disability Insurance (OASDI) portion of the FICA tax applies only to wages of $97,500 or less for calendar-year 2007. As such, when an employee’s bonus or vacation is vested at the end of one year but not paid until the following year after the employee’s wages exceed the FICA wage limit, the tax will not be paid. Accordingly, a question exists as to whether the payroll tax liability is fixed in the earlier year. Further, because taxes are a payment liability under the recurring-item exception, if payment is never made, such amount is not accruable. (See also Rev. Rul. 2007-3, which provides guidance on when a liability for services or insurance is fixed under Sec. 461 for a taxpayer using an accrual method of accounting.) Nevertheless, Rev. Rul. 2007-12 is a very positive step forward. 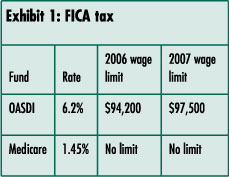 It is not entirely clear why the Service did not issue a companion procedure that would permit a taxpayer to automatically change, under Rev. Proc. 2002-9, its treatment of payroll tax liabilities associated with deferred compensation to comply with Rev. Rul. 2007-12. Presumably, this was because the IRS failed to provide any guidance on the more fundamental issue of whether the liability for payroll taxes is fixed under the all-events test and, thus, wants to review each taxpayer’s specific facts and circumstances.

Unless otherwise indicated, contributors are members of or associated with KPMG LLP. The views and opinions are those of the authors and do not necessarily represent the views and opinions of KPMG LLP. The information contained herein is general in nature and based on authorities that are subject to change. Applicability to specific situations is to be determined through consultation with your tax adviser.