How Debt Can Become Draconian Boot in a Sec. 351 Exchange

Sec. 351 allows property to be transferred to a controlled corporation by one or more persons without gain or loss recognition.

Example 1: Taxpayer A contributes a building (with a $1 million basis and $3 million fair market value (FMV)) to a new corporation solely in return for stock. Under Sec. 351, A recognizes no gain or loss.

Small changes in facts can alter the results.

Example 2: The facts are the same as in Example 1, except that A received stock and $100,000 in exchange for his contribution. The contribution of the building still qualifies under Sec. 351(a), but A’s $2 million realized gain ($3 million FMV – $1 million basis) is subject to Federal income tax, to the extent of the $100,000 boot received; see Sec. 351(b)(1)(A). Further, under Sec. 351(b)(1)(B), had A received property instead of cash, his realized gain would have been taxable to the extent of the property’s FMV.

Transfer of Property Subject to Liabilities

Property contributed to a corporation in a Sec. 351 exchange can be (and often is) subject to liabilities; these liabilities are frequently assumed by the transferee corporation. Normally, the liability assumption is in accordance with Sec. 357(a) and will not cause the contributing taxpayer to recognize gain or loss. To be in accordance with Sec. 357(a), the assumed liability cannot be in excess of the contributed property’s tax basis, under Sec. 357(c), and must have been generated for a bona fide business purpose, under Sec. 357(b).

Example 3: The facts are the same as in Example 2, except the transferee corporation also assumes a $500,000 purchase money mortgage note on the building. The contribution of the building still qualifies under Sec. 351(a), and A is still subject to Federal income tax, but only to the extent of the $100,000 boot received.

Because the note was incurred for a bona fide business purpose (i.e., the purchase of the property) and the amount of the liability does not exceed A’s basis in the building, the assumption of the note does not subject A to tax.

Again, small changes in facts can alter the results.

Example 4: Taxpayer B obtains a $100,000 personal loan by pledging a building as collateral. B keeps the funds and contributes the building (with a $1 million basis and $3 million FMV) to newly formed F Corp. solely in exchange for F’s stock. F assumes both a $500,000 purchase money mortgage note on the building and the personal loan.

In Example 4, it would certainly appear that there is no bona fide business reason for F to assume the personal loan. B’s retention of the $100,000 loan proceeds, coupled with F’s assumption of that liability, may be viewed as the economic equivalent of F borrowing the $100,000, then passing it to B as boot in the Sec. 351 transaction. This is the reason Sec. 357(b) was enacted—to address transactions in which a corporation’s assumption of debt is not business-related and is the economic equivalent of receiving boot. Thus, it would appear that Sec. 357(b) would apply in Example 4.

But, if Sec. 357(b) applies, is only the assumption of the personal loan considered boot in the Sec. 351 exchange? Because only the assumption of the personal loan had a bad purpose, it would seem that only it would be treated as boot. This makes a great deal of sense, but under Regs. Sec. 1.357-1(c), B will be subject to Federal income tax on $600,000 of realized gain (i.e., all of the liabilities F assumed are treated as boot, including the otherwise-benign assumption of the purchase money mortgage note). This regulation vastly contorts the result of the Sec. 351 transfers entered into by A and B.

In the comparison of taxpayers A and B (from Examples 3 and 4 above) in the exhibit at below, each transferred an identical asset in a Sec. 351 transaction, and would receive $2.4 million of stock in their respective transferee corporations ($3 million asset FMV minus the sum of the assumed liabilities and cash). However, A has $100,000 taxable gain, while B has $600,000 (the $500,000 note assumption is not treated as boot to A, but is treated as boot to B). This seems both odd and unfair; the sole reason that B is treated as receiving boot is because Sec. 357(b) treats the assumption of the personal loan as boot, and requires even the “good” liability (the note) to also be treated as boot. Thus, B would have been better off actually receiving $100,000 boot in the transaction (just like A), rather than trying to avoid all boot and getting caught by Sec. 357(b).

In 1954, Congress significantly re-wrote the 1939 Code; as a result, the related regulations were also changed. One adjustment included adding the following parenthetical to Regs. Sec. 1.357-1(c): “(and not merely a particular liability with respect to which the tax avoidance purpose existed).” This clause causes the draconian results illustrated above. The 1954 Senate Report (S Rep’t No. 83-1622) stated that:

The 1954 House Report (H Rep’t No. 83-1337) had exactly the same language describing the adjustment to Regs. Sec. 1.357-1(c). Thus, the inclusion of the 1954 parenthetical clause in the operative regulation seems to be consistent with Congressional intent. This means it may be very difficult for a taxpayer to argue its way out of a very poor tax result once Sec. 357(b) applies to any liability assumed in a Sec. 351 transfer.

As was noted, absent consideration for the tax effect, both A and B are in the same economic position following the Sec. 351 exchanges. In addition, they bear the same responsibility to establish that the corporate transferee’s assumption of a liability did not have a tax avoidance purpose. A is in a very solid position to prove this point, but B is
not. Had B merely received the $100,000 boot directly from the corporate transferee (as did A), B would have been far better off. Despite the fact that this harsh result seems consistent with Congressional intent, that intent was manifest over 50 years ago; it is strongly suggested that this result be reconsidered. 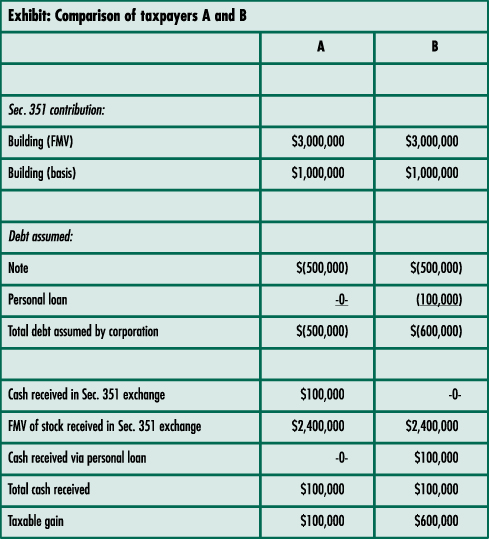 Unless otherwise indicated, contributors are members of or associated with KPMG LLP. The views and opinions are those of the authors and do not necessarily represent the views and opinions of KPMG LLP. The information contained herein is general in nature and based on authorities that are subject to change. Applicability to specific situations is to be determined through consultation with your tax adviser.