AMT Consequences of an Ownership Change

In the current economic environment, there will likely be more ownership changes of corporations with built-in losses (BILs). Whereas most tax planning routinely contemplates the impact of the Sec. 382 limitation on the use of a corporation’s net unrealized built-in losses (NUBILs) following an ownership change, the corresponding impact of Sec. 56(g)(4)(G) for adjusted current earnings (ACE) is often overlooked and may have a significantly different effect than Sec. 382. Under Sec. 382, tax basis in assets is restricted only when an actual loss is recognized, whereas under Sec. 56, the ACE basis in assets is adjusted to remove the NUBIL for ACE purposes. In addition, in situations in which there is an 80% or greater change in control of the value of the corporation, there is ambiguity under Sec. 56 about which allocation methodology should be used in reducing the assets basis for ACE purposes.

If a corporation has a NUBIL that exceeds the aforementioned threshold, any recognized BIL (up to the amount of the NUBIL) in the five-year recognition period is not deductible; instead it is treated as a pre-closing net operating loss (NOL) subject to the annual Sec. 382 limit. However, if no loss is recognized on the ultimate sale of the asset, the full amount of the pre-closing basis is unrestricted. As such, the bases in assets are not affected unless an actual loss is recognized, and then only the realized loss is restricted.

In contrast to Sec. 382’s treatment of a NUBIL, under Sec. 56(g)(4)(G) the corporation’s adjusted basis of each asset for ACE purposes is adjusted to its proportionate share of the FMV of the assets immediately before the ownership change. The adjustment results in a permanent reduction in the assets’ bases for purposes of computing ACE. In order for a transaction to fall under the application of Sec. 56(g)(4)(g) and the regulations thereunder, an “ownership change” must occur for a “loss corporation” as defined in Sec. 382(g) and Regs. Sec. 1.382-2(a)(1), respectively. In general, if there is a greater than 50 percentage point change of control of a corporation that has NOLs, carryover credits, or a NUBIL in excess of the threshold immediately prior to the change of control, the corporation will fall under the application of Sec. 56(g)(4)(g).

After determination that an ownership change of a loss corporation has occurred, the determination of whether a corporation has a NUBIL for ACE purposes immediately before an ownership change is based on the same rules as under Sec. 382 (including Sec. 382(h)(8)), except that ACE basis is used in place of regular tax basis. However, as the ACE basis in assets is adjusted to remove the NUBIL, there may be different outcomes depending on how the FMV is allocated to the basis of the assets.

Assuming that the reference in Regs. Sec. 1.56(g)-1(k)(1) should be to Regs. Sec. 1.338-6, it still is unclear when a residual allocation is appropriate because the literal reading seems to indicate that the rules of Sec. 338 would have to be applicable to the transaction, which would occur only if a Sec. 338 election was made as part of the transaction. However, if a Sec. 338 election was made in connection with the transaction, Secs. 382 and 56(g)(4)(G) would be inapplicable to the transaction because it would be treated as an applicable asset acquisition. In informal discussions with a representative in the Office of Associate Chief Counsel (Income Tax and Accounting Division), the representative stated that the reference was added in response to comments received from the AICPA’s Tax Division in 1990. The AICPA’s comments addressed the difficulty in obtaining appraisals of all businesses with independent measurement of goodwill and suggested that the methodologies of Secs. 338 and 1060 be used instead (i.e., the residual method). Considering this, it appears that the intent of the inclusion of the reference is to require that the residual allocation methodology be used in situations in which a Sec. 338 election was eligible to be made (i.e., there was a qualified stock purchase under Sec. 338(d)(3), but no Sec. 338(g) or (h)(10) election was made).

Note: Regs. Sec. 1.56(g)-1(k)(4)(i) contains an example of how ACE basis is adjusted in a situation with a 100% ownership change. However, based on the facts in the example, both the proportional and the residual allocation methods would produce the same result; as such, the example does not offer any additional insight into the aforementioned issue.

The difference in the application of Sec. 382 versus Sec. 56 as well as the potential impact of using proportional versus residual methodologies is illustrated in the following example.

Example: Individual A has owned all the issued and outstanding stock of L Corp. for the past five years. L has generated operating losses in recent years, and A has decided to sell L, although, as a result of the potential substantial shutdown costs, the offers for the stock of L are less than the individual FMV of each asset less operating liabilities. As such, A sells 100% of his stock in L to unrelated individual B for $22, triggering an ownership change under Sec. 382.

L’s regular and ACE tax basis balance sheets immediately prior to the sale as well as the FMV of each individual asset are shown in Exhibit 1. The NUBIL calculations under Secs. 382 and 56 are shown in Exhibit 2. The corresponding allocation of FMV to remove the Sec. 56 NUBIL is shown in Exhibit 3 using both the proportional and residual methodologies. Exhibit 4 illustrates a simplified calculation of L’s tax liability in the first post-closing tax period, assuming that: 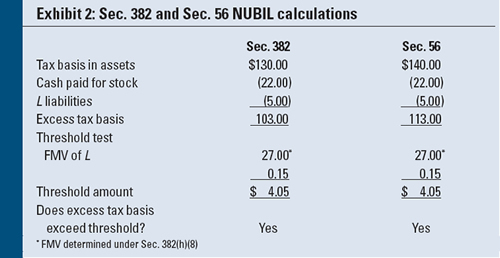 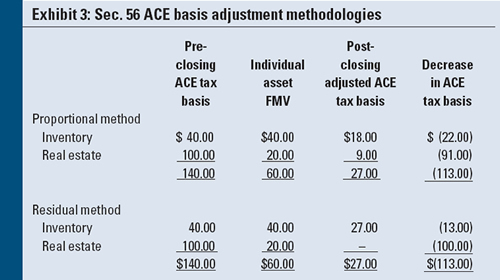 Following the ownership change, L turns the entire pre-closing inventory in the ordinary course of business for $40. Because the pre-closing tax basis in inventory was $40, there is no recognized BIL; therefore, all $40 of basis is deductible (i.e., there is no Sec. 382 restriction on the inventory basis). However, under Sec. 56, the ACE basis in assets (including inventory) is adjusted downward. Using the proportional method, L has reduced basis in inventory by $22, which results in an immediate positive adjustment for ACE, and that causes a $1.3 alternative minimum tax (AMT) liability. Using the residual method, L has reduced basis in inventory by $13, which does not create a current tax liability. Note that the tax liability incurred using the proportional method generates an AMT credit that is available to be carried forward to offset future tax. However, the AMT credit may only be used to offset the excess of the tax liability over AMT in future years, and as such the credit may have limited short-term value.

The above example illustrates the potentially significant difference of the more taxpayer-favorable Sec. 382 treatment of disallowing realized losses only on disposition of the asset versus the harsher Sec. 56 reduction in ACE basis to eliminate the NUBIL that tax practitioners need to evaluate for ownership changes involving loss corporations. The more taxpayerfavorable residual method would appear to be consistent with the AICPA’s comments; however, some uncertainty about its use will remain until the IRS issues further clarification.