Limited liability companies (LLCs) have become a very popular tax planning tool for U.S. taxpayers that desire the tax transparency of a partnership with the limited liability protections of a corporation. The LLC provided a simple means of achieving those objectives. When thrown into the context of international operations, however, the LLC possessed the potential to gum up the works as U.S. treaty partners determined how to treat this new entity.

Canada initially adopted an adverse position on LLCs not opting out of partnership treatment under the check-thebox rules. Canada characterized an LLC as a corporate vehicle in essence and determined that it was not eligible for treaty benefits because it was not a U.S. taxpayer when treated as a transparent entity for U.S. tax purposes. This characterization distinguished it from true partnerships in which Canada provided treaty benefits to the partners and S corporations, which were also (for some reason) afforded treaty protection.

For years, both U.S. and Canadian taxpayers urged Canada to rethink its position on treaty eligibility for U.S. LLCs. Canada responded favorably in the fifth protocol (the protocol) to the U.S.-Canada tax treaty (the treaty). Effective January 1, 2010, Canada will look through tax-transparent U.S. LLCs and determine treaty eligibility at the member level. Appropriately heralded as great news by the tax community, the excitement of LLC treaty eligibility overshadowed some significantly unfavorable changes for existing treaty beneficiaries.

The protocol provided the relief for LLCs via the treaty’s residency provisions, specifically the addition of Article IV, paragraph 6. At the same time, however, the protocol also added Article IV, paragraph 7, which may eliminate as much or more relief than that granted by paragraph 6. Specifically, paragraph 7(a) provides that a U.S. taxpayer will not be considered a U.S. resident under the treaty when receiving income from Canadian sources through a non-U.S. reverse hybrid. Paragraph 7(a) really represents nothing more than the incorporation of the provisions of Sec. 894(c), already applicable to U.S.-source payments, into the treaty so that Canadian-source payments are treated similarly.

Paragraph 7(b) contains an even broader disallowance, providing that a U.S. taxpayer will not be considered a U.S. resident under the treaty when receiving income from a Canadian hybrid. The exhibit above provides examples of tainted structures under Article IV, paragraph 7, of the treaty. 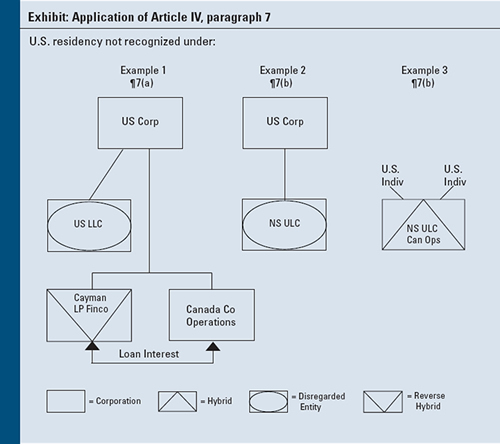 Example 1 in the exhibit represents a structure frequently used in a popular international financing strategy whereby a foreign finance company is established in a tax haven as a local partnership, which the tax authorities in foreign paying jurisdictions look through to apply the treaty of the U.S. parent to any payments. The United States, on the other hand, treats the finance company as a controlled foreign corporation and does not tax the U.S. parent on its earnings until repatriated. Deferral in the United States under this structure is dependent on Sec. 954(c)(6), which is set to expire at the end of 2009, but organizing the foreign operating companies under the finance company and then electing to treat them as disregarded entities would generally allow for deferral in the absence of Sec. 954(c)(6).

The tax impact of any tainted structure is that the recipient will not be treated as the resident of a treaty country and the payer–withholding agent will be required to withhold statutory withholding rates on payments for dividends, interest royalties, branch profits tax, etc. For U.S. recipients of Canadian source income, that means a rate of 25% (30% for Canadian recipients of U.S. source income) rather than 5%–15%, 0%, and 0%–10% treaty rates for dividends/branch profits tax, interest, and royalties, respectively.

In Example 1 in the exhibit, beginning on January 1, 2010, Canada Co would be required to withhold 25% of interest payments to Cayman LP, as opposed to the absence of withholding due on interest paid before the inclusion of paragraph 7(a). Similarly, in Examples 2 and 3, NS ULC would be required to withhold 25% of dividends to US Corp and the U.S. individual investors, as opposed to the 5% rate for a corporate parent or the 15% rate for the individual investors, rates at which it would have withheld prior to the inclusion of paragraph 7(b).

What Now? Evaluation of Canadian Structures

Which taxpayers should evaluate their U.S.-Canadian structures? Every taxpayer meeting the following criteria: (1) A U.S. taxpayer with Canadian operations or investments, or vice versa, (2) using an LLC, ULC, or other check-the-box entity (3) that is treated as a hybrid or reverse hybrid entity based on the interface of Canadian-U.S. tax law.

As taxpayers evaluate their structures, they should first define their objectives (e.g., deferral, global income tax minimization, preservation of foreign tax credits, generation of foreign source income, etc.). Second, they should determine what, if anything, will happen to their ability to achieve their objectives when the changes to the treaty residency provisions kick in on January 1, 2010. Finally, they should investigate the possibility of changing the current structure in order to allow for a better alignment with their objectives. The taxpayer must accomplish the last step with an understanding of the U.S. and Canadian tax treatment and the treatment of any other jurisdictions involved, the revised structure, and the tax impact of the conversion to that structure under the tax laws of the United States, Canada, and any other pertinent tax jurisdictions.

For example, the stated objective in Example 3 in the exhibit is to allow each U.S. individual investor to claim a foreign tax credit for his or her share of Canadian income taxes paid by NS ULC. The new residency provisions will not change the nature of the NS ULC under either U.S. or Canadian tax law. Paragraph 7(b) will, however, increase the withholding on dividends paid by NS ULC from 15% to 25%. The increase in withholding in addition to the taxes NS ULC pays on its operating earnings may drive U.S. individual investors into an excess foreign tax credit position in years dividends are paid, assuming the U.S. individuals do not have other low-taxed sources of foreign income.

One alternative the U.S. investors might consider is converting the NS ULC to a Canadian limited partnership. The change would have no impact from a U.S. tax perspective because the NS ULC is already treated as a partnership, and the conversion would likely be characterized as a nonevent if partners and operations did not change. From a Canadian standpoint, the limited partnership itself would not be taxable in Canada, but the U.S. individual partners would be required to file income tax returns in Canada on a goingforward basis. The U.S. individuals would presumably not be subject to branch profits tax in Canada, so the economic tax impact of operating as a partnership may be less than under the NS ULC structure, although the administrative impact may be more burdensome because, in addition to Canadian filing requirements for the U.S. partners, Canada also requires additional withholding for certain payments made to foreign-owned Canadian partnerships.

The conversion in Canada, however, is another matter. Canada does not have a tax-free form of converting a ULC to a limited partnership. Consequently, the taxpayer would likely need to execute the conversion by means of a liquidation of the ULC followed by the establishment of a new partnership. Canada treats liquidating corporations as disposing of all assets for fair market value (FMV) immediately prior to liquidation, thereby creating the potential for taxable capital gains at the ULC level. Furthermore, the liquidation may generate dividend income to the U.S. individual investors under Canadian tax law, which would be subject to a reduced 15% rate of withholding if completed prior to January 1.

The costs of converting, then, could well be prohibitive. Still, if the FMV of the Canadian operation does not materially exceed the basis of its assets, and if the dividend withholding at liquidation is low enough when compared to the benefit of the absence of dividend withholding in the future under a partnership structure, the U.S. individuals may want to pursue operating in Canada as a limited partnership.

Note: Canadian and U.S. tax analysis provided immediately above is rudimentary in nature and in no way represents the kind of exhaustive analysis required in a true structural evaluation exercise. Furthermore, the Canadian analysis is based solely on federal income tax impact and does not include an analysis of the provincial income tax impact, which would be a necessary component of any structural evaluation. The evaluation analysis was provided for illustrative purposes only and is meant solely to demonstrate the kinds of concerns that need to be addressed prior to January 1. Taxpayers should work with their U.S. and Canadian tax advisers in order to perform a meaningful evaluation and identify appropriate planning strategies.