Section 302(a) of the Emergency Economic Stabilization Act of 2008, P.L. 110-343 (EESA), created Sec. 162(m)(5) to impose strict limitations on the deductibility of certain executive remuneration. Section 111 of EESA, as amended by Section 7001 of the American Recovery and Reinvestment Act of 2009, P.L. 111-5 (ARRA), imposed these restrictions on entities that sell assets to Treasury under the Troubled Assets Relief Program (TARP). In addition, entities that had received such assistance prior to the February 17, 2009, effective date of ARRA had contractually obligated themselves to follow the rules of Sec. 162(m)(5) (Department of Treasury, October Interim Final Rule, 73 Fed. Reg. 62205 (10/20/08)). The restrictions of Sec. 162(m)(5) apply for any tax year during which any obligation arising from the receipt of financial assistance under TARP is outstanding. Due to the complexity of Sec. 162(m)(5), understanding the proper application of these rules is important. This item highlights the differences between Sec. 162(m)(5) and Sec. 162(m) as it existed before EESA and demonstrates the application of Sec. 162(m)(5).

Shortly after the enactment of EESA, the IRS issued Notice 2008-94 to provide guidance on issues arising from new tax provisions added by EESA, including Sec. 162(m)(5). In addition to clarifying issues concerning when an employer is an applicable employer and who is a covered executive under Sec. 162(m)(5), the notice includes multiple examples of how the remuneration limitation applies.

To What Year Is Deferred Deduction Executive Remuneration Allocable?

A legally binding right to remuneration exists to the extent that compensation may not be reduced unilaterally or eliminated once the executive has performed the services creating the right. If the facts and circumstances indicate that any discretion to eliminate or reduce the compensation lacks substantive significance or is contingent on a condition, the employee will still have a legally binding right to the remuneration. If the employee’s right to remuneration is subject to substantial risk of forfeiture that requires the employee to continue performing services, the remuneration is allocated on a pro-rata basis over the period of time that the employee is required to continue to perform services. A substantial risk of forfeiture related to any condition other than the continuing performance of services is disregarded for these purposes.

Example 4: Assume the same facts as in Example 2, except that A will be paid the $250,000 deferred remuneration in the event that an asset is sold by a specific date in 2011 without regard to continued employment. The risk of forfeiture is disregarded, and the entire $250,000 payment is considered to be for services performed in 2009. The $250,000 payment made in 2011 is deferred deduction executive remuneration allocable to 2009 and is subject to the remaining $100,000 2009 limitation.

Example 5: Assume the same facts as in Example 1, except that on December 31, 2009, A obtains a legally binding right (a nonqualified stock option) to acquire stock with an exercise price equal to the fair market value of the stock on December 31, 2009 (without any requirement of continued employment in order to be able to exercise the right and retain the shares). A exercises the stock option in 2010 and recognizes income of $150,000 in connection with that exercise. The remuneration resulting from exercise of the stock option is for services performed in 2009 and is not deductible because 2009’s entire $500,000 limitation was fully utilized by 2009 base pay in excess of $500,000.

Per Notice 2008-94, amounts attributable to growth in deferred compensation over the passage of time, such as interest or return on investment, are subject to the Sec. 162(m)(5) limitation. This creates an additional tracking requirement for future years.

Example 7: Assume the same facts as in Example 1, except that A earns $400,000 in total base salary, and X had established a nonqualified supplemental executive retirement plan (SERP) for A’s deferred executive remuneration. Under the terms of the plan, A will become fully vested in his SERP on December 31, 2011, and will be paid a certain amount per year commencing upon retirement and continuing for the next 15 years.

To be fully vested in the SERP, A must meet certain service requirements. A portion of the service requirements had been met prior to X’s participating in TARP. In 2009, the full amount of A’s $400,000 salary is deductible. While there is no deduction in 2009 for the SERP, in future years when SERP payouts occur, deductibility of SERP benefits earned during 2009, 2010, and 2011 (including subsequent earnings thereon) may be limited. To determine the amounts earned in each year, an actuarial schedule may be necessary. If the amount of SERP benefit determined to have been earned in 2009 (even though paid later) is greater than the remaining $100,000 limitation, it will not be deductible. Similar limitations would apply for 2010 and 2011 because the TARP obligation is still outstanding.

The more stringent limitations on executive remuneration set forth in Sec. 162(m)(5) bring new challenges and complexity in their application. Companies receiving TARP financial assistance will need to be diligent both in identifying the years over which affected executives’ compensation is “earned” and in tracking that compensation to its ultimate year of potential deductibility. Due to the nature of deferred compensation, the effects of TARP may be with a company long after the assistance is repaid to the government. 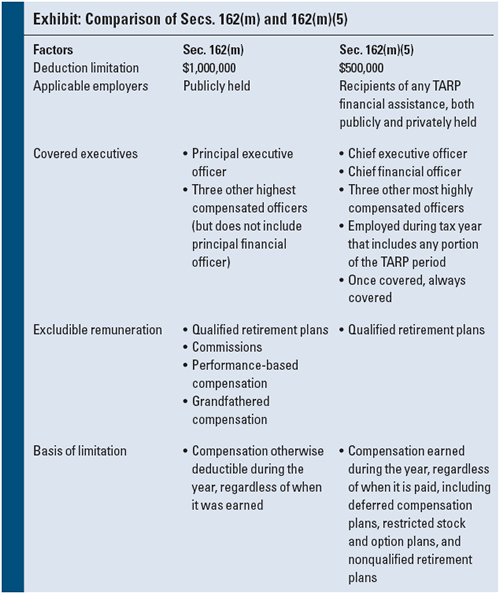