Purcell is a professor of accounting and a professor of law at Creighton University, where he has been on the faculty since 1979. Prior to that, he was a tax consultant with the Omaha office of Touche Ross & Co.

Purcell has been a dedicated volunteer leader for the AICPA for more than 20 years. Most notably, he was the chair of the organization’s Tax Executive Committee. He currently chairs the AICPA’s Energy Tax Policy Task Force and serves as a member of the Tax Practice Responsibilities Committee. He has served on numerous other Tax Division committees and task forces, including the Tax Accounting Committee and the Tax Legislation and Policy Committee. In addition, Purcell has served on the AICPA’s Pre-certification Education Executive Committee and the Strategic Planning Committee and has been a member of the AICPA’s governing council.

Among the awards Purcell has received are the Creighton University Distinguished Faculty Service Award, the Nebraska Society of CPAs Public Service Award, and the Outstanding Accounting Educator Award. He was named the Beta Alpha Psi National Business Information Professional of the Year and has twice been named by Accounting Today as one of the Top 100 Most Influential People in Accounting. 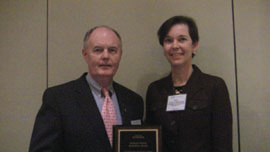