As 2012 drew to a close, many public and private companies paid significant dividends in advance of higher income tax rates and the 3.8% supplemental Medicare tax. If these companies incur a net operating loss (NOL) in 2013 or 2014, the corporate equity reduction transaction (CERT) rules could provide an unpleasant surprise and limit the carryback of NOLs. While practitioners typically think of the application of the CERT rules in cases of debt-financed distributions or stock acquisitions, the rules could apply even if the underlying transaction is not debt-financed.

The application of the CERT rules is a multistep process.

An excess distribution exists when the aggregate distributions (including redemptions) made during a tax year by a corporation with respect to its stock exceed the greater of:

The following examples illustrate the calculations to determine whether an excess distribution is present.

None of the $20 million is an excess distribution because it does not exceed the greater of:

If the taxpayer has a CERT transaction and a CERIL, the taxpayer cannot carry back the portion of the NOL attributable to the CERIL to a year prior to the CERT year and can only carry it forward. This limitation on carrybacks applies to losses incurred in the year of the CERT and the two subsequent tax years. A CERIL is defined as the excess of the NOL for the tax year over the NOL for such tax year determined without regard to any allocable interest deductions otherwise taken into account in computing such loss (Sec. 172(h)(1)).

The CERIL is computed in three steps:

The last step is to apply the $1 million de minimis threshold. Allocable interest expense is not a CERIL unless it exceeds $1 million.

The final piece of the puzzle is to apply the limitation of the CERIL to determine the portion of the NOL that can be carried back to a year prior to the CERIL. Under the general rules of Sec. 172(b)(1)(A), a corporate NOL can only be carried back two years, with the remainder carried forward for 20 years. 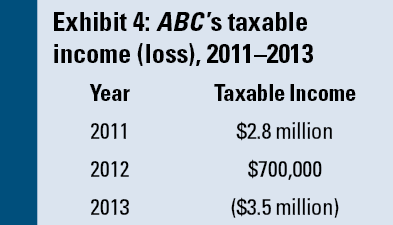 Absent the application of the CERT rules, ABC would carry back the entire $3.5 million loss to eliminate its regular taxable income for 2011 and 2012, with nothing remaining as a carryforward. However, because of the CERIL, ABC can carry back only $500,000 of the 2013 NOL to 2011, the year prior to the year of the CERT transaction, with the results shown here:

Because of the CERT rules, ABC could use only $500,000 of its $3.5 million NOL carryback, with $3 million remaining as a carryforward.

The CERT rules can be especially harsh when an applicable corporation engages in a transaction that results in increased interest expense in a year following a CERT transaction. Assume a corporation made an excess distribution in 2012. The corporation had no debt on its balance sheet, and it funded the excess distribution from cash on hand. In 2013 the company borrowed $50 million to complete an asset acquisition. The company incurred interest expense of $4 million and an NOL of $5 million. Even though an asset acquisition is not a CERT transaction, the 2013 NOL nevertheless must be tested under the CERT rules to determine whether a CERIL is present.

Businesses potentially subject to the CERT limitation should consider the impact of the CERT limitations on their NOL carrybacks on their FASB ASC Topic 740, Income Taxes, tax provision. Absent the CERT rules, ABC would typically record the tax benefit of the entire $3.5 million NOL carryback as a receivable. With the application of the CERT rules, the tax benefit of only $500,000 of the NOL is recorded as a receivable, with the remaining tax benefit of the $3 million treated as a deferred tax asset. For many corporations this will be only a balance sheet classification issue. However, the CERT rules may result in a detrimental rate impact for businesses that are required to maintain valuation allowances on their deferred tax assets.

For additional information about these items, contact Mr. O’Connell at 630-574-1619 or frank.oconnell@crowehorwath.com.