Patricia A. Thompson, CPA, received the 2014 Arthur J. Dixon Memorial Award, the highest award given by the accounting profession in the area of taxation. The award, bestowed by the AICPA Tax Division, was presented Nov. 5 at the AICPA fall Tax Division Meeting in Washington, by Jeffrey A. Porter, immediate past chair of the AICPA Tax Executive Committee. 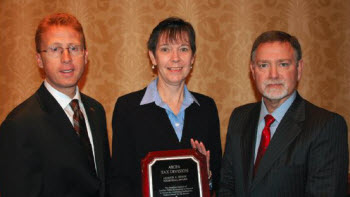 Thompson is a tax partner with Piccerelli, Gilstein & Co. LLP in Providence, R.I. She focuses on closely held business owners and their businesses in the manufacturing, real estate, service, and wholesale industries. She is also a nationally recognized expert on tax policy. She has testified on numerous occasions before Congress, the IRS, and the IRS Oversight Board. In addition, she often testifies at hearings of the Rhode Island Legislature on pending legislation. In 2009, she was a member of the Rhode Island governor’s Tax Policy Strategy Workgroup.

Thompson has been an active member of the Rhode Island Society of CPAs throughout her career, serving as president, vice president, secretary, and treasurer. She is a graduate of the University of Rhode Island, receiving a B.S. in accounting, and Bryant College, where she earned a Master of Science in Taxation.