Get a group of CPA tax preparers together, especially while their memories of tax season are fresh, and their talk soon will turn to their tax preparation software and how it might have made the ordeal easier. So The Tax Adviser and the Journal of Accountancy are thankful to the thousands of AICPA member tax preparers each year who similarly but on a large scale "talk shop" through this survey. This year, to be exact, 3,851 of them returned a response indicating they prepared 2015 tax returns for a fee.

Products Covered and Profile of Respondents

Eight of the 15 software products the survey named had significant numbers of users, in proportions that have shown only temporary fluctuations in recent years: UltraTax CS, a Thomson Reuters product (23% of respondents); CCH's ProSystem fx (21%); Lacerte, by Intuit (17%); ProSeries, also by Intuit (12%); Drake Software's Drake Tax Software (11%); CCH Small Firm Services offering ATX (5%); CCH Axcess Tax (2.5%); and GoSystem Tax RS, another Thomson Reuters product (2%). Thus, four companies continue to effectively dominate the CPA tax software market, as reflected by the survey. Other products of the 15 were each used by less than 2% of respondents and are not included in the exhibits accompanying this article. Use of Lacerte was down slightly from 20% in 2015. Shares of the rest were within a couple of percentage points from the 2015 survey, with UltraTax CS and CCH Axcess Tax slightly higher than last year and ATX, Drake, and ProSeries slightly lower.

Choice of tax software tends to correlate with the size of the respondent's firm, and the respondents skewed slightly toward midsize firms from sole practitioners this year, which might account in part for an increase in share of products that are more likely to be used by midsize and larger firms. This year, sole practitioners were 30% of respondents, compared with 36% last year. Thirty-six percent were in firms of between two and five preparers (same as last year), and 22% in firms of six to 20 (up from 19% in 2015). As previously, 7% worked in firms of between 21 and 100 preparers, and less than 4% in still larger firms. Seventy-six percent of CPAs surveyed prepared more returns for individuals than for businesses, although nearly all respondents prepared some business returns. For 89% of them, business returns represented up to half of their volume. Users of ATX, Drake, and ProSeries were most likely to have a lower ratio of business to individual returns.

Levels of general satisfaction with tax return preparation software were virtually unchanged from last year. UltraTax CS and Drake continued for at least the third consecutive year to receive the highest overall rating of 4.5 out of 5 (see Exhibit 1 below). As previously, Drake users gave it the highest ratings of any product for ease of installation and updates, and updates during tax season (both 4.8). Drake, Lacerte, ATX, and UltraTax CS all received favorable ratings for ease of use. Also, as previously, the overall rating for GoSystem Tax RS was the lowest (3.6) among the eight major products, with CCH Axcess Tax (3.7) next lowest. It may be worth noting in that regard, and with correlation again to firm size, that GoSystem Tax RS also had by far the highest percentage of respondents who had no input into the decision to use it (53%), with CCH Axcess Tax the next highest at 29%. ATX, Drake, and ProSeries were most likely to have been chosen by the respondent, at 95%, 91%, and 89%, respectively. For all eight major products combined, 64% said they solely chose the software, with another 24% having input into the decision. 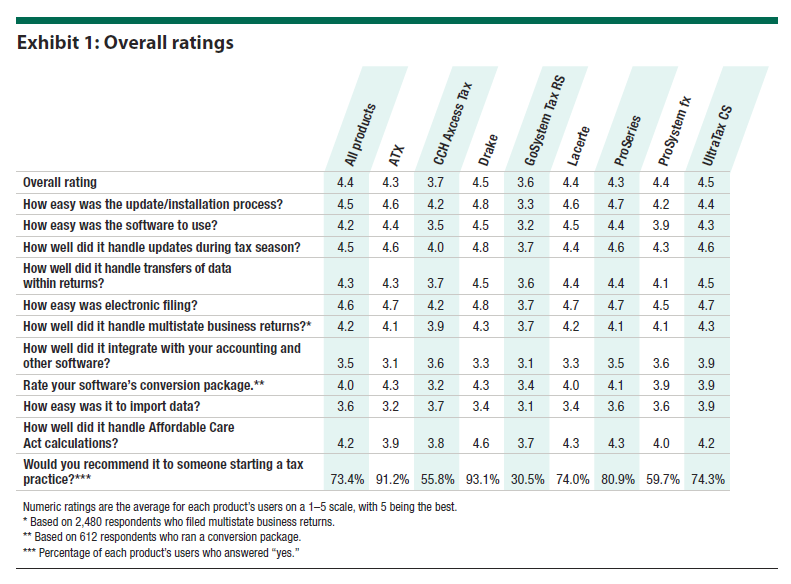 Electronic filing generally was considered easy for all products, although GoSystem Tax RS registered a below-average 3.7. All eight products got lower ratings for importing data and integration with accounting and other software, with average ratings of 3.6 and 3.5, respectively. UltraTax CS appeared to have an edge in this regard, scoring 3.9 on both questions.

Asked if their software provided all needed forms, 16% of all respondents answering the question said it did not. The highest percentage of negatives for this question were for ProSeries and GoSystem Tax RS (both 34%), and the lowest were for ATX and UltraTax CS (both 7%).

For a second year, the survey asked how well software navigated a tortuous and still relatively new set of considerations affecting a broad swath of taxpayers—those related to the requirement enacted by the Patient Protection and Affordable Care Act (PPACA), P.L. 111-148, of employers to provide, and individuals to maintain, qualifying health care coverage. With another year's experience by users and software designers, one might expect reported improvements, but the overall rating for PPACA calculations was unchanged at 4.2 out of 5, and each product's rating was not much different than before.

For a second year, the survey allowed up to three responses to questions on what features users liked best and liked least, rather than forcing them to choose a single feature for each question. As with the overall ratings, these assessments were largely consistent with previous ones. For features liked best (see Exhibit 2 below), ease of use was chosen by users of ProSeries and Lacerte (28% and 27%, respectively), well above the average of less than 20% of all respondents. Although as mentioned above, when asked if their software contained all needed forms, GoSystem Tax RS users were more likely to say it did not, paradoxically, more of them than for other major products chose "number of forms/comprehensiveness" as a feature they liked (32%). ProSystem fx also registered its second-highest percentage of likes (26%) for this attribute (the highest was accuracy, at 27.5%). 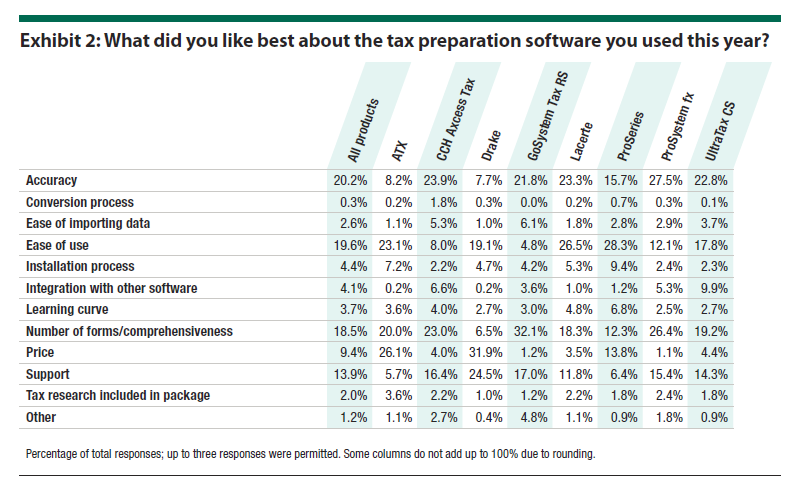 Drake shone in its users' appreciation of its support (24.5%), well above the average for all major products of 14%. Despite their overall enthusiasm for the product, however, Drake users were unhappy about its integration, or lack of it, with other software (18%), and tax research not being included in the package (22%) (see Exhibit 3 below). Users of GoSystem Tax RS apparently did not find it particularly easy to use (20% dislike for "ease of use").

Likes and dislikes tend to break most pronouncedly on price. Most CPAs, it is no secret, feel they pay too much for their tax software—for some products more than others. Those who registered price as a "like" were more likely to be users of the more budget-conscious products, i.e., Drake, 32% of whom liked its price, and ATX (26%) (see Exhibit 2).

Among the 30% of all respondents who looked askance on their software's price tag, the 40% of Lacerte users who least liked its price figured most prominently (see Exhibit 3). Not far behind in their price antipathy were users of UltraTax CS (39%) and ProSystem fx (37%). However, both the latter products registered a slightly smaller price discomfort than in 2015, when they registered 41% and 42%, respectively. 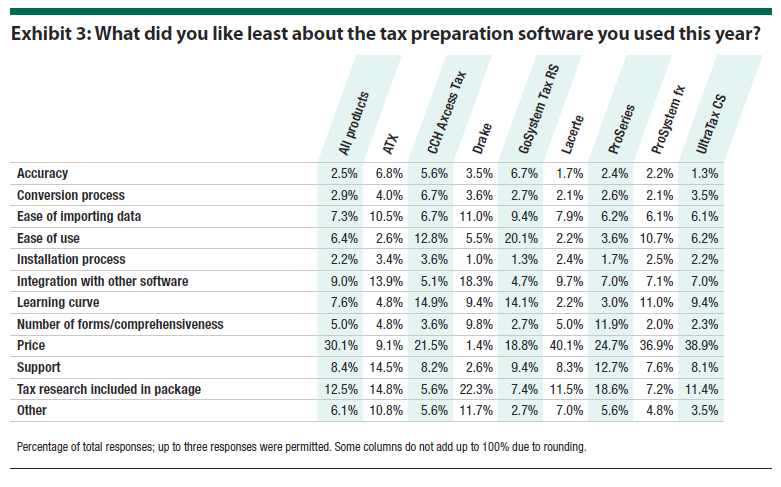 Only 207 respondents said they had switched from one of the eight major products after last year, which makes it difficult to draw definitive conclusions about why they switched (see Exhibit 4). Also, note the relatively high number of "other" responses, many of which did not speak clearly to a product's merit or desirability (e.g., one write-in entry read, simply, "corporate decision"). Unsurprisingly, price led the reasons for having switched, given notably by former users of ProSeries (63%) and UltraTax CS (50%). Most of the former ProSeries users switched to UltraTax CS or Drake, and a significant number of former Lacerte users switched to UltraTax CS (17 of 43). A significant number of switchers from ProSystem fx were now using CCH Axcess Tax or UltraTax CS (28 and 26, respectively, of 79 total).

The survey also asked whether respondents expected to stick with the same software next year; only 2.7% of users of the major products said they would not, a lower percentage than in years past. Of those future likely switchers, the highest percentage was 7% of GoSystem Tax RS users, followed by 5% of those now with CCH Axcess Tax.

Best for a New Practice

For several years, the survey has asked which product is best for a new practice. As in past years, users of Drake were most likely to recommend their software for that purpose at 93%, with ATX close behind at 91% (see Exhibit 1). Eighty-one percent of ProSeries users recommended it, slightly higher than last year, while 74% for UltraTax CS was slightly lower. Lacerte also rose in this category to 74% of users from 69% last year. 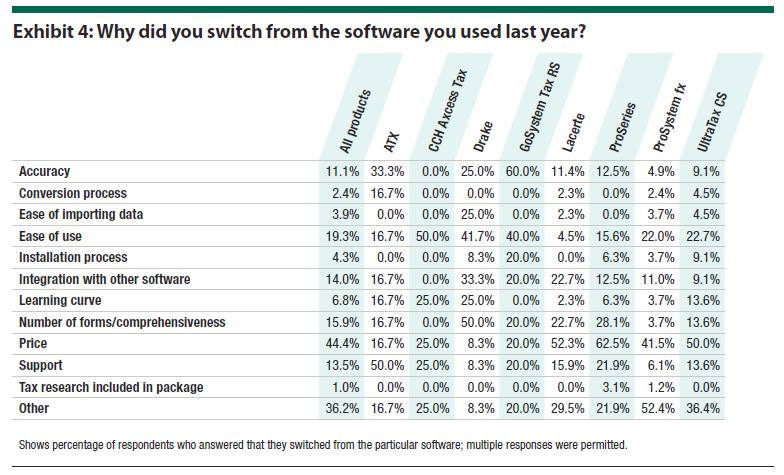 Obtaining software technical support appears important to having a successful tax season; as in past years, most respondents report having needed some assistance (81%) (see Exhibit 5 below). The results by product also appear to have changed little this year, with the most appeals for help made this year by users of GoSystem Tax RS and CCH Axcess Tax (93% and 90%, respectively). Drake users also had a relatively high need for support (89%), but they reported both the highest average level of ease in getting it and highest quality of the support obtained (4.8 and 4.5, respectively). This appears consistent with many of them naming support as a best-liked feature of Drake, as mentioned previously. Similarly, Drake users who received training from the software's provider gave that training the highest marks among users of all eight major products who reported receiving training (4.5 out of 5). About 42% of Drake users and one-third of users of all major products reported they received training. Training was rated below the average of 4 points for CCH Axcess Tax and GoSystem Tax RS (both 3.4) and ATX (3.8).

The telephone remains, if anything, an even more preferred method of obtaining support over email, live chat, and other media than in past years (used by 94% of all major product users needing support). Thirty-eight percent of Pro­Series users took advantage of live chat or instant messaging for support, the highest use of that option, with CCH Axcess Tax and Lacerte close at 35% and 33%, respectively, but no others above the average of 23%.

Cloud-computing options figured in a few instances of "other" write-in likes, and the lack of them among dislikes and reasons for switching software. However, of the eight major products' users, most (87%) reported that the program resided on their own hard drive or network, with 13% saying it was on the vendor's server. These percentages have shifted only slightly since 2012, when they were 90% and 10%, respectively. Cloud operation was highest for GoSystem Tax RS (90%) and CCH Axcess Tax (which advertises itself as cloud-based, although only 87% of users so identified it), with UltraTax CS (24%) being the only other product above single-digit percentages.