Ascertaining the Tax Impact on the Shareholder of a Corporate Assumption of Liabilities in a Sec. 351 Transfer

The transfer of debt to a corporation will create a taxable event in these three situations:

Example 1. Retaining a liability to avoid shareholder gain recognition in a Sec. 351 transfer: S transferred three properties to T Corp. in a Sec. 351 exchange, as shown in the exhibit below. All properties are free of any liabilities except for Property A, which is subject to a $75,000 mortgage. S did not take the legal steps necessary to transfer the mortgage on Property A to T; he remained personally liable for that mortgage and continues to make the monthly payments. 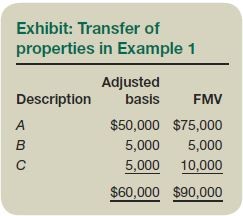 S recognized no gain as a result of the Sec. 351 transfer. Even though Property A was transferred to T, the corporation does not assume the liability to which that property was subject. Therefore, the total liabilities transferred ($0) did not exceed the basis of the property transferred ($60,000). T cannot take a basis in Property A greater than the basis in the hands of the transferor ($50,000).

Had T assumed the $75,000 mortgage, S would recognize a $15,000 gain ($75,000 liabilities less $60,000 total basis of properties transferred). If S had merely furnished a personal guaranty on the notes, with the corporation primarily liable, and made the monthly mortgage payments, he would have also recognized gain on the transaction. A personal guaranty by the shareholder does not shift the liability from the corporation back to the shareholder (Seggerman Farms, Inc., 308 F.3d 803 (7th Cir. 2002)).

Example 2. Assuming nonrecourse debt in a Sec. 351 transfer:Assume the same facts as in Example 1, except that Property A and other land owned by S are subject to nonrecourse debt of $150,000. The land's FMV is $50,000. S makes an agreement with T Corp. that he will personally satisfy $75,000 of the nonrecourse note.

Example 3. Transferring no net value: C, an individual, transfers equipment with an FMV of $90,000 to XYZ Corp. in exchange for 100% of the stock. The equipment is encumbered by a liability of $100,000. Under the proposed regulation, the stock received by C from XYZ will not be treated as being issued for property because no net value was transferred. To prevent the exchange from being disqualified under Sec. 351, C should contribute additional property with an FMV of at least $10,000.

Transferring additional property to the corporation: A shareholder can reduce or eliminate the gain arising from the transferee corporation's assuming liabilities in excess of the basis of assets by transferring additional unencumbered property to the corporation. All assets transferred by the shareholder are aggregated for determining total debt, total basis, and total gain (i.e., the determination of excess liabilities is based on total debt assumed less basis of all assets transferred) (Sec. 357(c)(1); Regs. Sec. 1.357-2; Rev. Rul. 66-142).

Paying down debt: Another planning option is to pay down the debt prior to transfer.

Example 4. Avoiding gain on transferred debt in a Sec. 351 transfer:J operates her business as a sole proprietorship. Five years ago, she borrowed $60,000 to update her factory and pledged the factory building as security. The security agreement provides that the building cannot be held by anyone other than the debtor. The loan was set up with no principal payments due until the sixth year. Thus, J still owes the entire $60,000.

J wants to incorporate the business and contribute the building in exchange for stock. However, she does not have the cash to pay off the loan on the factory. Thus, she must also transfer the debt. Since J has a valid business reason for transferring the debt, along with the factory, to the corporation, her motive for the transfer is not tax avoidance.

To avoid recognizing the $20,000 gain, J has the following options:

In the Seventh Circuit's Seggerman Farms case, the taxpayers alleged that their guaranties on debt that was transferred in a Sec. 351 exchange were the same as transferring personal notes as was done in Peracchi. The taxpayers transferred their farming assets and debt (that exceeded the basis of the assets) to a new corporation. The court ruled that the taxpayers recognized gain on the transfer. The court noted that a guaranty is not the same as transferring personal notes because a guaranty is a promise to pay only if certain events occur.

The IRS might challenge this approach during an audit, assuming H lived outside the Second and Ninth Circuits. Within any circuit, the note should be properly structured (e.g., have a market rate of interest, include a reasonable repayment schedule, and be collateralized, if possible) to withstand scrutiny.