In the last decade, a new anti-abuse standard—a transaction undertaken "with a view" to avoid or abuse a tax provision—has been added to the already lengthy and complex set of anti-abuse rules in the consolidated return regulations. The two "principal purposes" of this discussion are (1) to examine the meaning of this standard and (2) to discuss whether the economic substance doctrine still should be applied to a transaction that does not run afoul of the "with a view" standard. 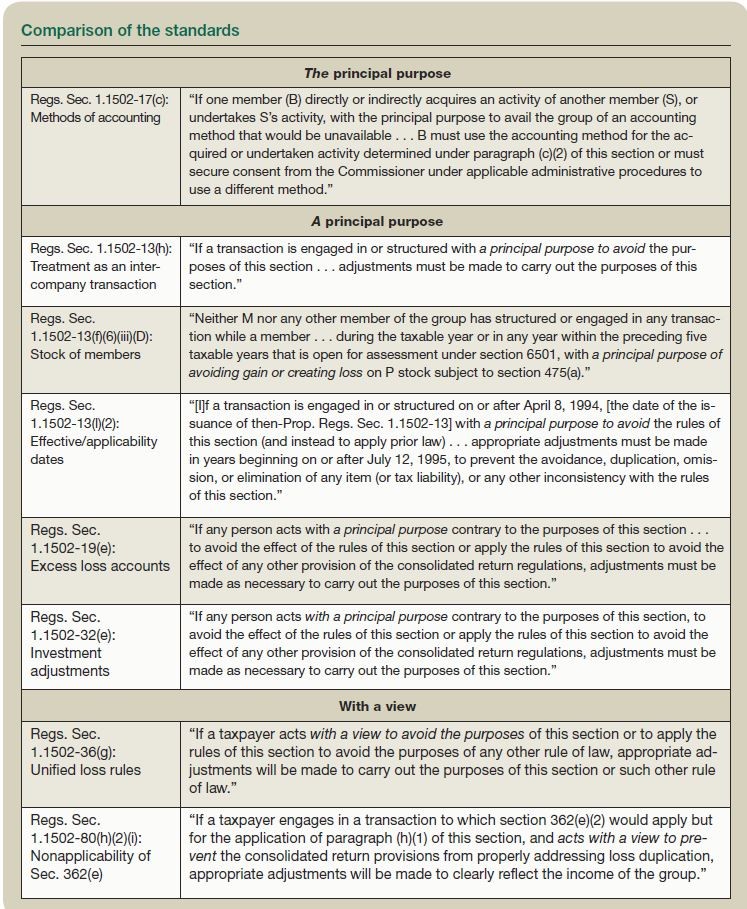 "The principal purpose" appears to be the narrowest anti-abuse standard in the consolidated return context. Courts generally have taken the position that a valid and equally important nontax business purpose will preclude the application of an anti-abuse rule that requires the prohibited motivation to be "the principal purpose" (see Hawaiian Trust Co., Ltd., 291 F.2d 761 (9th Cir. 1961)).

Transactions 'with a view'

The "with a view" standard is vague and the broadest form of anti-abuse rule in the consolidated return context. Regs. Sec. 1.1502-36(g) provides more substance with five examples. While helpful and instructive to taxpayers contemplating a transaction that closely resembles one of the examples, the examples do not illustrate all transactions that can be affected by the regulation. Rather, the examples represent nonexclusive fact patterns. The underlying question of what "with a view" means remains unanswered.

When faced with ambiguity, a hopeful practitioner will quickly turn to the preamble to glean some guidance. Unfortunately, the preamble to Prop. Regs. Sec. 1.1502-36(g) (REG-157711-02) does not shed any light on this anti-abuse standard; it broadly provides that the intent of the anti-abuse rules is "to ensure that only transfers made in the ordinary course of business enjoy the benefits and avoid the burdens arising from the principles adopted in these regulations." In the absence of instructive legislative history, courts generally interpret statutory language by reference to the meaning of a word in the everyday sense (see Malat v. Riddell, 383 U.S. 569 (1966)). Merriam-Webster's Collegiate Dictionary defines the phrase "with a view to" as "with the object of." Thus, when applying the "with a view" standard, an appropriate inquiry may be whether the transaction was undertaken "with the object of" avoiding or abusing the purposes of the provision. This does not entirely clear the uncertainty but indicates that "with a view" means something less than "the principal purpose" or "a principal purpose."

A slightly discouraged yet tenacious practitioner could resort to another rule of statutory construction—the canon of statutory consistency, which provides that identical words used in different parts of the same act are intended to have the same meaning (Gustafson v. Alloyd Co., 513 U.S. 561, 570 (1995)). The closest analogy is Regs. Sec. 1.341-2(a)(2), which includes the same phrase and provides that a corporation must be formed or availed of "with a view" to meet the definition of a collapsible corporation. Further, that regulation provides that "[t]he requirement is satisfied whether such action was contemplated, unconditionally, conditionally, or as a recognized possibility." Thus, based on the analogy to the regulations under Sec. 341, it appears that even a tangential purpose of avoiding the purposes of the regulation could run afoul of the "with a view" standard. This approach would provide less opportunity for a taxpayer with a valid principal business purpose to overcome the scrutiny of the "with a view" standard.

Suppose a taxpayer is considering two alternatives for structuring a transaction that has unified-loss-rule implications. The taxpayer consults a tax practitioner for advice on which alternative is more tax-efficient. Does a taxpayer that chooses the more tax-efficient alternative become guilty of having a view to avoid the purpose of the regulation? Are there only two ways to not run afoul of this standard: (1) by being uninformed of the potential tax consequences or (2) by choosing the alternative that provides the government with the greatest amount of revenue? It seems unlikely that the IRS would create a rule that would discourage taxpayers from seeking competent tax advice. After reviewing the everyday meaning and the explanation of the same phrase in another section, however, the meaning is still unclear. The only certainty is that the "with a view" standard has a far broader reach than the other two standards.

The legislative history sheds some light on these statements and provides that "if the tax benefits are clearly consistent with all applicable provisions of the Code and the purposes of such provisions, it is not intended that such tax benefits be disallowed if the only reason for such disallowance is that the transaction fails the economic substance doctrine as defined in this provision" (S. Rep't No. 110-206, 110th Cong., 1st Sess. 92 (2007)). In a recent opinion, the Sixth Circuit rejected the IRS's attempt to apply the economic substance doctrine to recharacterize a transaction that complied with the particular Code provision. The Sixth Circuit explained, in Summa Holdings, Inc., 848 F.3d 779 (6th Cir. 2017), that:

The IRS also has issued guidance for examiners and managers. Large Business & International division Directive LB&I-4-0711-015 provides that if a transaction is subject to and complies with a detailed statutory or regulatory scheme, "the application of the doctrine should not be pursued without specific approval of the examiner's manager in consultation with local counsel."

A transaction that is subject to the application of the "with a view" standard seems to be subject to a detailed regulatory scheme and hence seems to be a type of transaction that Directive LB&I-4-0711-015 addresses. The purpose of the consolidated return anti-abuse rules generally is to act as a "guardrail" to ensure that only certain transactions that follow the detailed principles outlined in the regulations will enjoy the benefits Congress intended. Once a taxpayer has successfully negotiated the consolidated return anti-abuse maze and overcome the "with a view" standard, should not the inquiry be over? Consider a potential exchange with an overzealous IRS counsel:

Judge: "Did the taxpayer successfully overcome the 'with a view' standard?"

Judge: "Was the transaction subject to a detailed regulatory scheme?"

Judge: "Do you agree that the economic substance doctrine is not relevant to this transaction?"

All the signs (legislative history, case law, and Directive LB&I-4-0711-015) lend support to a conclusion that the taxpayer should not be subject to the application of the economic substance doctrine once it successfully overcomes the "with a view" standard.

For additional information about these items, contact Ms. Smith at 202-414-1048 or annette.smith@pwc.com.

Unless otherwise noted, contributors are members of or associated with PricewaterhouseCoopers LLP.