Taxpayer Bill of Rights violation does not invalidate notice of deficiency

The Tax Court, based on its long-standing precedent that it will not look behind a notice of deficiency, refused to invalidate a notice of deficiency or provide other relief to a taxpayer who claimed that the notice was invalid because she had been deprived of the rights guaranteed to her by the Taxpayer Bill of Rights during her IRS examination.

From 2011-2013, Maria Moya was a professor at the College of Southern Nevada. She filed a Form 1040, U.S. Individual Income Tax Return, for each of those years, reporting wages she received from the college. She also included with each return a Schedule C, Profit or Loss From Business, that showed a relatively large loss for a business she identified as "IAM Enterprises."

In 2012, the IRS began an examination of Moya's returns for those years. In 2014, the examination was being conducted out of the IRS's Las Vegas office. In February 2014, Moya, who had moved to Santa Cruz, Calif., sent a letter requesting the examination be transferred to Santa Cruz. Getting no reply from the IRS, Moya again wrote the IRS, reiterating her request and stating that she had received no reply to her earlier letter. In July, the IRS told Moya that her "Form 1040" had been sent to the IRS's Santa Cruz office. Despite Moya's efforts, the IRS next scheduled a hearing regarding the examination in Las Vegas for November 2014. In response, Moya sent a letter reiterating her request for a hearing in Santa Cruz.

Moya's final request fell upon deaf ears at the IRS and, before she got a hearing, the IRS's Las Vegas office sent her a notice of deficiency for all three years under examination, in which it disallowed various expenses she claimed for IAM, increased her income in 2013 for unreported Social Security benefits, and assessed her over $26,000 in tax and over $5,000 in accuracy-related penalties.

Moya was unhappy at this turn of events and filed a petition with the Tax Court, challenging the IRS's determination. However, unlike the usual Tax Court petition, Moya's petition did not claim the IRS made any errors in its adjustments to her income. Rather, she challenged the IRS's determinations on the ground that, in conducting the examination of her returns, it deprived her of rights guaranteed to all taxpayers by the Taxpayer Bill of Rights (TBOR) (see "Taxpayer Bill of Rights," below, for a complete list). In particular, she claimed that the IRS had violated her TBOR rights to have her questions answered and to meet with an IRS representative at a time and place convenient to her. 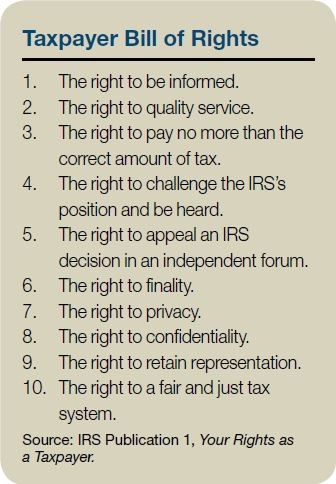 The IRS argued in its response that Moya was impermissibly looking behind the notice of deficiency in her argument and because she claimed no substantive error with the IRS's adjustments, the Tax Court should sustain its determinations.

The Tax Court sustained the tax deficiencies assessed against Moya, finding that by not assigning any error in her petition to the IRS determinations in the notice, she had conceded that the IRS determinations were correct. The court did not give any credence to her TBOR arguments because she was, as the IRS argued, impermissibly looking behind the notice of deficiency.

Assignment of errors: Rule 34(b) of the Tax Court Rules of Practice & Procedure specifies what must be included in the content of the petition in a deficiency case. Rule 34(b)(4) requires a taxpayer to make clear and concise assignments of each and every error that the taxpayer alleges the IRS committed in determining the deficiency. The rule cautions: "Any issue not raised in the assignments of error shall be deemed to be conceded." Rule 41(b)(1) provides, however: "When issues not raised by the pleadings are tried by express or implied consent of the parties, they shall be treated in all respects as if they had been raised in the pleadings."

Because Moya failed to assign error to the IRS's adjustments disallowing her Schedule C deductions or including in her 2013 gross income Social Security benefits, and because she refused the court's invitations to raise those issues at trial, the Tax Court treated her as having conceded that there were no errors in those adjustments. It did, however, consider her TBOR-based challenge to the notice of deficiency.

TBOR challenge: Moya made a straightforward argument based on the TBOR announced by the IRS on June 10, 2014. She argued that there were no deficiencies in tax for any of the examination years because the notice was unlawfully issued. She claimed that the notice was unlawfully issued because, in conducting its examination for the years in question, the IRS deprived her of rights guaranteed to all taxpayers by the TBOR.

The IRS likewise made a straightforward argument on this point. The IRS explained that a proceeding before the Tax Court to redetermine a deficiency is a proceeding de novo, so the court's determination of a taxpayer's tax liability must be based on the merits of the case and not any previous record developed at the administrative level. Based on this principle, the Tax Court had held in Greenberg's Express, Inc., 62 T.C. 324 (1974), that generally it will not look behind a notice of deficiency to examine the IRS's policy or procedure involved in making its determinations, a holding that has been repeatedly upheld by other courts, including the Ninth Circuit, where Moya's appeal in this case would lie. The IRS claimed that Moya's TBOR argument was an attempt to look behind the notice of deficiency, so under Greenberg's Express, it should be disregarded.

The Tax Court asked the parties to provide post-trial briefs on the issue of whether the TBOR accorded Moya rights that, if violated, would be reviewable, despite its holding in Greenberg's Express. While Moya, who has no legal training, was unable to articulate such an argument, the IRS's lawyers, who have more than adequate legal training to address the issue, provided the court only a "perfunctory" argument that the rights found in the TBOR are not constitutional rights. Thus, the court was forced to conduct its own analysis of the question.

The Tax Court, after analyzing the issue, concluded that, even if it gave credit to Moya's claims that, in examining her returns, the IRS violated her TBOR rights to be informed, to challenge the IRS position and be heard, and to a fair and just tax system and, also, that the IRS failed to afford her an interview near her home in California before it issued the notice, it would not invalidate the notice of deficiency or provide Moya relief. It refused to do so for the "simple reasons" that (1) the IRS TBOR did not add to Moya's rights and (2) even if everything she claimed was true, the IRS's missteps would not, in a de novo proceeding, cause it either to lift or to lighten her burden of proving the IRS's determinations of deficiencies in her tax were in error.

Addition of rights under the TBOR: The court's first conclusion was based on the history of the TBOR. The court found that there is ample evidence to conclude that, in adopting a TBOR in 2014, the IRS "had no more in mind than consolidating and articulating in 10 easily understood expressions rights already enjoyed by taxpayers and found in the Internal Revenue Code and in other IRS guidance." The court observed that the IRS has no power to legislate new rights and had stated that the rights in the TBOR had always been there for taxpayers. Furthermore, at various points in the history of assorted legislative proposals that would have required the IRS acting in conjunction with the Taxpayer Advocate Service to publish a TBOR, the proposals were clear in stating that they would not create or confer rights that were not otherwise provided for in the Code.

The IRS's conduct of its examination: Moya complained that the IRS deprived her of the opportunity to present her case adequately, if at all, before it issued the notice and that, in particular, the IRS deprived her of an interview near her home in California. The Tax Court explained that except in certain extraordinary circumstances, taxpayers have the statutory right to a hearing in Tax Court before the IRS may assess a deficiency, and the Tax Court can redetermine a deficiency amount. However, under the Tax Court rules, the taxpayer bears the burden of proof that the IRS's determination is incorrect, and Moya had not cited any provision of the Code that would relieve her of this burden. Instead of showing error in the IRS's determinations, Moya had instead challenged the IRS's right to make the determinations because of the Service's alleged violations of her unspecified statutory rights.

Consequently, whatever mistakes the IRS had made, the Tax Court found they did not deprive Moya of her right to challenge the Service's deficiency determinations in the Tax Court. As the court stated, "[t]o the extent that, on account of his violation of rights guaranteed to petitioner under the IRS TBOR, respondent in the notice overstated the deficiencies in petitioner's tax, her remedy was not to be excused from liabilities imposed by the Internal Revenue Code but to take the opportunity afforded by the Code to prove the correct liabilities before this Court."

As this case and countless similar taxpayer experiences demonstrate, the IRS often does a dismal job of protecting the preexisting taxpayer rights that the Service has highlighted in the TBOR. This, of course, has not gone unnoticed by Congress, which periodically makes efforts to enact legislation that will somehow force the IRS to treat taxpayers better.

Most recently, as part of the Protecting Americans From Tax Hikes (PATH) Act of 2015, P.L. 114-113, Congress amended Sec. 7803(a) to impose on the IRS commissioner the duty to ensure that IRS employees are familiar with and act in accord with taxpayer rights afforded by other provisions of the Internal Revenue Code, including, specifically, the rights enumerated in the IRS TBOR. The PATH Act amendments to Sec. 7803(a)(3) took effect on Dec. 18, 2015, too late to be of use to Moya.

However, the Tax Court noted that the amendments to Sec. 7803(a) had been discussed in Facebook, Inc., No. 17-cv-06490-LB (N.D. Cal. 5/14/18). In that case, Facebook argued that one of the rights in the statutory TBOR — "the right to appeal a decision of the Internal Revenue Service in an independent forum" (Sec. 7803(a)(3)(E) (as amended)) — gives the company a legally enforceable right to take its case to IRS Appeals in lieu of litigating before the Tax Court. The district court did not agree. The Tax Court stated, "The District Court's consideration may prove useful when, inevitably, we come to consider the statutory TBOR and the duties imposed on the Commissioner by amended section 7803(a)(3)."