New US duties on certain EU and Chinese goods

On Oct. 2, 2019, a World Trade Organization (WTO) arbitrator panel, a three-person appellate body, issued its report regarding the appropriate value of acceptable countermeasures the United States could impose on the European Union for providing subsidies to non-U.S. aircraft manufacturers. The WTO arbitrators determined that the United States was entitled to impose tariffs on $7.5 billion of EU-origin goods (see WTO Dispute WT/DS316/ARB).

Following the WTO announcement, the Office of the U.S. Trade Representative (USTR) released a statement noting that the arbitration award was the largest ever granted by the WTO (see ustr.gov and published a final list of products subject to additional duties in 15 sections of the U.S. Harmonized Tariff Schedule (HTS), covering 160 eight-digit HTS codes. Certain aircraft from specified European countries are subject to a 10% ad valorem duty rate, and other products are subject to a 25% duty rate. All 15 sections had an effective date of Oct. 18, 2019.

The United States has historically taken the position that the EU countries, and specifically four of its member states (France, Germany, Spain, and the United Kingdom), have unfairly subsidized non-U.S. aircraft manufacturers to an extent that damaged the United States and its economy. Following unsuccessful discussions with the EU to cease subsidization, the United States in 2004 submitted a formal challenge to the WTO of subsidies the EU provided for large civil aircraft, asserting that the subsidies caused an estimated $11 billion per year in damage to U.S. sales and market share.

The WTO subsequently determined that the assistance was inconsistent with the EU's obligations under the General Agreement on Tariffs and Trade and Articles 5 and 6.3 of the Agreement on Subsidies and Countervailing Measures. The EU was granted until Dec. 1, 2011, to comply with the WTO recommendations. While the EU did respond by adjusting some subsidies, the United States requested a compliance panel in 2012 to evaluate the EU's overall actions and whether those remedies resolved the adverse effects as determined by the WTO. In May 2018, the WTO concluded that there were additional violations. This result permitted the United States to seek countermeasures.

On April 8, 2019, the USTR proposed tariff countermeasures in response to harm caused by EU aircraft subsidies (see ustr.gov. Pursuant to authority granted under Section 301 of the Trade Act of 1974 (19 U.S.C. §2411), the USTR proposed the imposition of additional ad valorem duties of up to 100% on a list of 326 HTS codes (see 84 Fed. Reg. 15028). The list included products in addition to aircraft and aerospace parts, including in certain industries such as liquors, agriculture, and cheeses. The list focused on product categories that make up the EU's $440 billion of exports to the United States; the United States in turn exports only approximately $318 billion to the EU. Therefore, the tariffs as proposed were designed to meet the Trump administration's trade agenda objectives of improving the trade imbalance.

Following the publication of the proposed tariff countermeasures, the USTR received over 600 comments and held a hearing on May 15-16. Based on the testimony and comments received, the USTR stated, some of the affected parties requested that the USTR consider additional products that were not included on the initial list. The USTR subsequently published an additional list of products covering 89 tariff subheadings under consideration for Section 301 tariffs.

The USTR published a final product list of eight-digit HTS codes to be subject to punitive tariffs in response to the WTO arbitrator panel's ruling on Oct. 2. The list is broken into 15 sections, each covering different HTS codes and specific EU member countries of origin. Items included in Section 1, covering certain airplanes, will carry a 10% punitive duty, while the remaining 14 sections, covering a broad range of products, will impose a 25% punitive duty. In its publication of the final list, the USTR noted the information was provided for informational use only, and definitive determinations with applicable tariff numbers will be published in an upcoming FRN.

Examples of products included are:

The USTR has notably removed certain products from the preliminary lists, from one or more EU member countries. For example:

On Oct. 2, the USTR announced in two FRNs new exclusions for products otherwise subject to Section 301 punitive tariffs on Chinese-origin goods, outlined below. On Sept. 27, the USTR continued to affirm that product exclusion decisions would be based on the criteria stated in notices establishing the exclusion process.

On June 26, the USTR announced an exclusion procedure for List 3, which closed Sept. 30.

The denied exclusions, as well as the total granted, are further illustrated in the table "Punitive Tariff Exclusions Granted or Denied" (below). As there has been no exclusion procedure yet announced for List 4, close monitoring is advised for companies impacted by covered items, and as such, List 4 is excluded from the table. 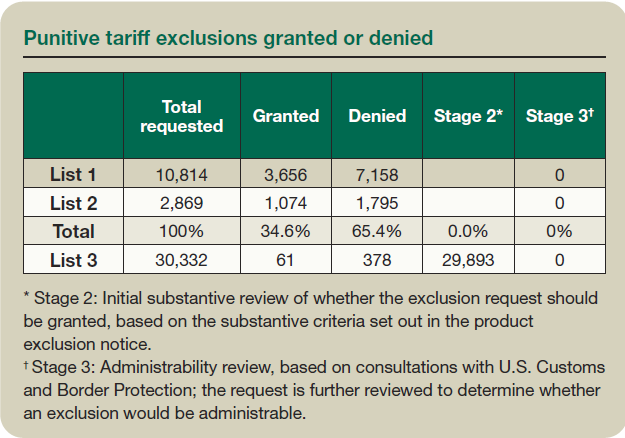 With the implementation date of Oct. 18, 2019, the tariffs' impact on any imports of identified products should be immediately considered. Close monitoring of further developments, such as any EU retaliatory actions, along with the final product list, once it is published in the Federal Register, is warranted for U.S. importers of EU-origin products.

Immediate actions for such companies to consider include:

U.S. distributors that purchase from related parties will almost certainly have transfer prices impacted by the imposition of Section 301 duties. Along with strategically mitigating the impact of duties on their operations while aligning the income tax and customs approaches, businesses should review the mechanics for reporting any transfer-pricing adjustments to U.S. Customs and Border Protection. This process may be particularly complex when duties are present for only a portion of the year, and in many cases, actions need to be taken in advance of importations. Companies should address the impact of duties on transfer prices proactively.

It is also noted that, considering recent exclusions granted, companies importing Chinese-origin goods that are granted exclusions should take action to seek refunds on any punitive duties previously paid.

For additional information about these items, contact Ms. Grais at 202-327-8788 or susan.grais@ey.com.

Contributors are members of or associated with Ernst & Young LLP. Versions of many of these items were previously published as Ernst & Young Tax Alerts.