Foreign notional interest regimes may hinder deductions of US subsidiaries

The recently enacted U.S. anti-avoidance tax rules targeting hybrid mismatches undoubtedly cast a very wide net. The application of these rules poses substantial challenges for global businesses and international tax practitioners, especially where the arrangements carrying the "hallmarks" of hybridity (e.g., instruments treated as debt in one country and equity in the other, or entities treated as taxpaying corporations in one tax jurisdiction and fiscally transparent in another) are not present or are far removed from the U.S. taxpayer whose deductions are at stake. In this context, it may come as a surprise how seemingly benign inbound structures involving interest or royalty payments by U.S. subsidiaries to foreign affiliates may trigger these anti-avoidance rules where the foreign affiliates operate in countries that have notional interest deduction (NID) tax regimes.

By way of background, the law known as the Tax Cuts and Jobs Act, P.L. 115-97, added Secs. 245A(e) and 267A (this discussion does not address the potential application of Sec. 245A(e) to NIDs), which deny a dividends-received deduction for certain hybrid dividends and deny deductions for certain hybrid arrangements, respectively. The principles in these provisions and final Treasury regulations issued in April 2020 (T.D. 9896) are, other than a germane difference described below, generally similar to the hybrid mismatch rules in the Organisation for Economic Co-operation and Development's base-erosion and profit-shifting (BEPS) Action 2, Neutralising the Effects of Branch Mismatch Arrangements.

Sec. 267A, very broadly, denies a deduction to a U.S. taxpayer for payment or accrual of interest or royalties to a foreign person where there is no corresponding income inclusion for the payee under foreign tax law as a result of a hybrid arrangement (hereinafter referred to as a "hybrid deduction"). A common inbound structure targeted by these rules may involve a U.S. subsidiary making interest payments to its foreign parent under the terms of an instrument characterized as debt for U.S. federal income tax purposes but treated as equity under the tax laws of the parent's jurisdiction. In this scenario, absent the operation of Sec. 267A, the U.S. company could avail itself of an interest deduction while the foreign parent might be able to avoid the recognition of taxable income for local tax purposes under a participation exemption or dividends-received deduction regime. Sec. 267A prevents this "double benefit" by disallowing the interest deduction of the U.S. subsidiary. 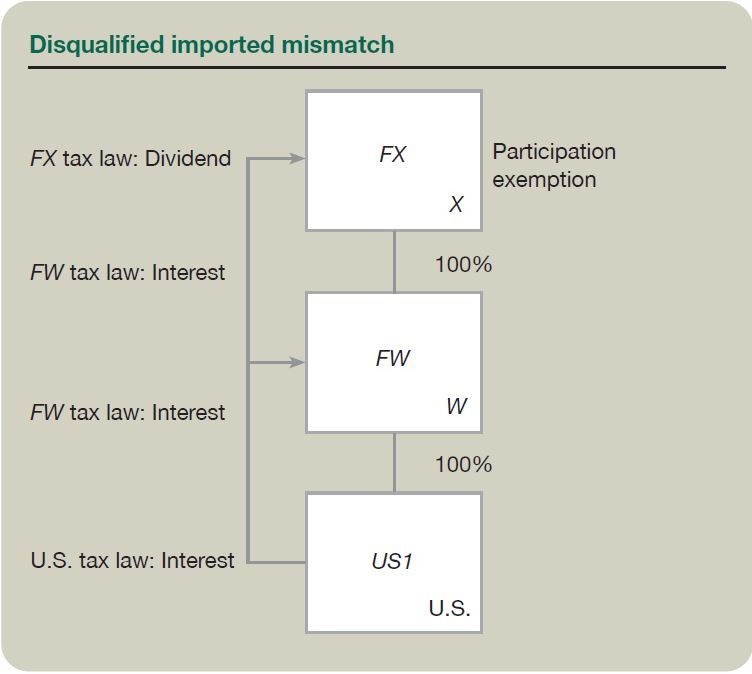 Example 1: FX, a foreign corporation incorporated and tax resident in country X, holds an instrument issued by FW, a foreign corporation incorporated and tax resident in country W, that is treated as equity under country X's tax law and indebtedness under country W's tax law. In turn, FW holds an instrument issued by US1, a U.S. corporation, that is characterized as indebtedness under both country W and U.S. tax law. Assume that payments by FW to FX are treated as dividends under country X's law that are not included in FX's income under a participation exemption system but are deductible interest to FW for country W's tax purposes. Also, assume payments by US1 to FW are treated as interest for each country's tax purposes and are included in FW's income.

Broadly, under the final regulations, US1's interest payment is subject to disallowance. FW's deductible interest payment to FX likely would be a hybrid deduction if country W's tax laws were substantially similar to the hybrid mismatch rules in the final regulations. Hence, to the extent FW's income attributable to US1's payment is directly or indirectly offset by FW's hybrid deduction, the disqualified imported mismatch rule would deny the interest deduction toUS1.

NID regimes are intended to mitigate the tax preference for debt financing over equity funding by providing a corporate taxpayer with the benefit of a deduction determined with reference to its funded capital, often taking the form of a deemed "interest on equity." Several countries have adopted NID regimes or some variation thereof, including Belgium, Cyprus, Italy, Portugal, and Switzerland (the latter limited to certain cantonal-level taxes). In its hunt for hybrid mismatch transactions, the OECD did not include NIDs among the arrangements within the scope of BEPS Action 2. Nonetheless, Treasury followed a different route.

The preamble to the final regulations describes NIDs as deductions for residents with respect to equity that typically are allowed without regard to dividend distributions. In other words, interests in foreign entities that give rise to NIDs may be equity for tax purposes in both the United States and the relevant local country. Presumably, with this similar tax characterization in mind, a number of stakeholders submitted comment letters arguing that NIDs do not involve sufficient "hybridity" to be within the scope of the U.S.'s hybrid mismatch rules. Treasury and the IRS were not, however, persuaded by these arguments and specifically included NIDs in the scope of the U.S. anti-hybrid rules.

Therefore, revisiting the previous scenario, the disqualified imported mismatch rule would potentially find application even by substituting the hybrid instrument with plain-vanilla equity between FX and FW, as long as FW is allowed an NID under country W's tax law (see the chart "NID Imported Mismatch"). 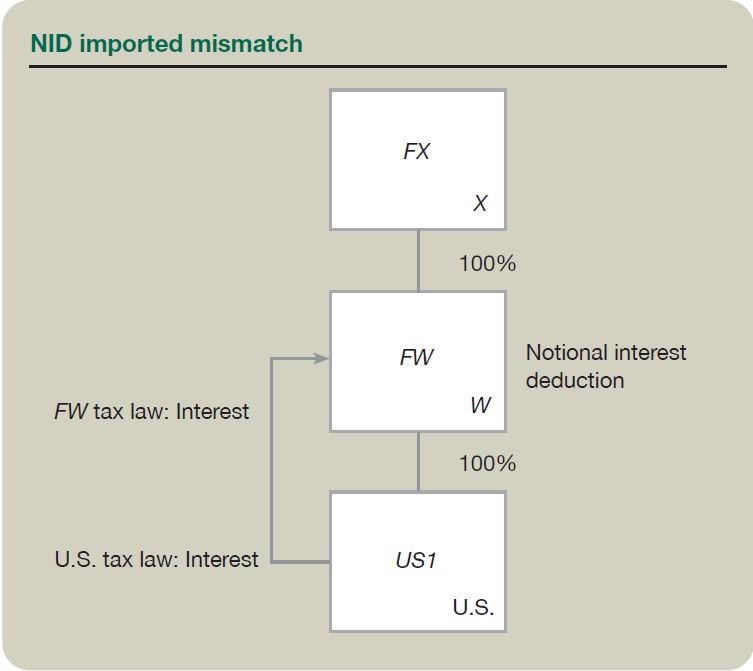 Importantly, NIDs are not per se hybrid deductions. Instead, the final regulations characterize NIDs as hybrid deductions only to the extent the shareholders of the investee company would include a corresponding amount in income under the tax laws of their respective jurisdictions if the amounts were interest paid to them by the investee company (Regs. Sec. 1.267A-4(b)(1)(ii)). Considering the above example, an NID will be a hybrid deduction only to the extent that FX would include the amount in income if, for purposes of country X's tax law, the amount were interest paid by FW to FX. This may not be the case where, for example, FX is a resident of a country that does not have an income tax or has a territorial tax system.

Connecting NIDs to the deductions of a US subsidiary

This result strikes one as counterintuitive, especially in the face of a seeming lack of a factual link, or at least a direct financial connection, between the NID benefit awarded under foreign tax laws and the business arrangement between the foreign affiliates and the U.S. subsidiary.

The final regulations tackle the issue of connecting the U.S.-source payment with the foreign hybrid deduction with specific "setoff" and ordering rules (Regs. Sec. 1.267A-4(c)). The overall approach of these provisions aims at ensuring that the foreign hybrid deduction is applied first, dollar for dollar, to the otherwise deductible U.S.-source payments. In other words, in most circumstances the entire amount of interest and royalty payments made by a U.S. subsidiary to its foreign affiliate would be disallowed, as long as the foreign affiliate benefits of an NID are at least equal to the total amount of such payments received.

The same rules also ensure a similar outcome when a hybrid deduction, including an NID, is incurred by another foreign affiliate in the group and made available to the foreign recipient of the U.S.-source payments through a chain of intercompany transactions or as a result of a foreign tax consolidation.

Under the expansive U.S. hybrid mismatch rules, multinational companies headquartered in countries offering NIDs are pressed to take a fresh look at traditional bona fide debt and royalty arrangements with their U.S. subsidiaries and evaluate the risk of a permanent loss of U.S. tax deductions. Such a result would be even harsher in instances where the outbound payments are separately subject to U.S. tax withholding.

Finally, while beyond the scope of this item, it should be noted that the relevance of the interplay between U.S. anti-hybrid provisions and foreign NID regimes is not limited to inbound structures. Rather, U.S.-headquartered businesses with subsidiaries in foreign jurisdictions granting the benefits of NIDs would also need to consider the impact of the U.S. hybrid mismatch rules on their repatriation strategies and the availability of the dividends-received deduction under Sec. 245A.

Mark Heroux, J.D., is a tax principal in the Tax Advocacy and Controversy Services practice at Baker Tilly US, LLP in Chicago.

For additional information about these items, contact Mr. Heroux at 312-729-8005 or mark.heroux@bakertilly.com.

Unless otherwise noted, contributors are members of or associated with Baker Tilly US, LLP.