Making tax-free distributions to the extent of AAA

The accumulated adjustments account (AAA) tracks the amount of undistributed income that has been taxed to S corporation shareholders after 1982. S corporations with accumulated earnings and profits (AE&P) can distribute AAA (to the extent of basis) to a shareholder free of further tax. S corporations without AE&P determine the taxability of distributions without reference to AAA (Sec. 1368); however, practitioners should keep track of the AAA balance in any event because part or all of the amount in AAA can be distributed tax-free if the S corporation election terminates. Also, the AAA balance may be beneficial or necessary to know when certain redemptions or mergers occur.

It is decreased by:

The Coronavirus Aid, Relief, and Economic Security (CARES) Act, P.L. 116-136, created the Paycheck Protection Program (PPP) under which the U.S. Small Business Administration guaranteed loans made to certain businesses to help keep their workforce employed during the COVID-19 pandemic. If certain conditions were met, lenders forgave these loans. The Consolidated Appropriations Act, 2021, P.L. 116-260, confirmed that forgiven PPP loan proceeds are excluded from income and further clarified that these proceeds are to be treated as tax-exempt income under Sec. 1366. In addition, eligible expenses paid for with forgiven PPP loan proceeds are fully deductible.

While deductible expenses associated with PPP loan forgiveness are included in the S corporation's nonseparately stated income or loss, these expenses will not reduce AAA. According to the instructions for the 2021 Form 1120-S, U.S. Income Tax Return for an S Corporation, expenses paid with PPP loans that are forgiven reduce the other adjustments account (OAA). Since the forgiveness of a PPP loan results in tax-exempt income, AAA will not be increased by the amount forgiven; instead, OAA will be increased.

An exception exists to the rule that nondeductible expenditures reduce AAA. If the S corporation pays federal income taxes attributable to a prior C corporation period, the shareholder's basis is reduced, but AAA is not adjusted (Sec. 1368(e)(1)(A); Regs. Sec. 1.1368-2(a)(3)(i)(C)(1)).

AAA adjustments due to credit recapture

Income in respect of decedent

A person acquiring stock in an S corporation from a decedent reduces the stepped-up basis in the inherited S corporation stock to the extent the stock's value is attributable to income in respect of a decedent (IRD) (Sec. 1367(b)(4); Regs. Sec. 1.1367-1(j)). AAA is not reduced by the IRD items.

Adjusting AAA in the proper order

The AAA balance at the beginning of the year is adjusted in the following order (Sec. 1368(e)(1)):

Example 1. Calculating AAA: M is the sole shareholder of P Inc., a calendar-year S corporation. P has AAA of $2,500 and AE&P of $6,750 on Jan. 1. M's stock basis on that date is $10,000, and he has no basis from any debt owed to him by P. Losses passed through by P are not limited by the passive income or at-risk rules, and M has no other capital gain or loss transactions. During the year, P distributed $6,500 to M, and his Schedule K-1, Shareholder's Share of Income, Deductions, Credits, etc., shows the passthrough items in the table "Passthrough Items From M's Schedule K-1 in Example 1" (below).

The distributions of $6,500 reduce stock basis and AAA and are nontaxable. The $2,000 capital loss is fully deductible on M's Form 1040, U.S. Individual Income Tax Return.

M's stock basis is determined as shown in the table "M's Stock Basis in Example 1" (below).

Normally, the step in the fourth bulleted item under "Adjusting AAA in the Proper Order" above (decreasing AAA by the excess of loss items over income items) as well as the limitation in the second step (limiting the reduction for loss items to the increase for income items) will not apply. The limitation and the fourth step are necessary only when there is a net negative adjustment; that is, when the aggregate loss and deduction items that decrease AAA exceed the aggregate income and gain items that increase AAA.

Example 2. Calculation of AAA when there is a net negative adjustment: L is the sole shareholder of S Inc., a calendar-year S corporation. S has AAA of $2,500 and AE&P of $6,750 on Jan. 1. L's stock basis on that date is $10,000, and he has no basis from any debt owed to him by S. Losses passed through by S are not limited by the passive activity loss rules or the at-risk rules, and L has no other capital gain or loss transactions. During the year, S distributed $6,500 to L, and his Schedule K-1 shows the items in the table "Items From L's Schedule K-1 in Example 2" (below). 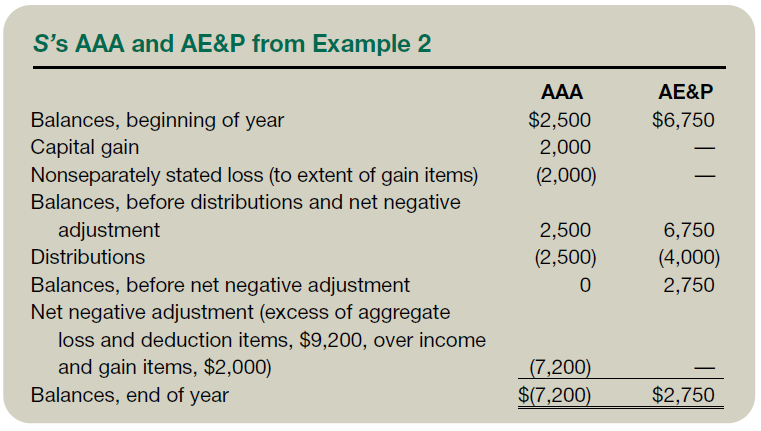 L's stock basis is determined as shown in the table "L's Stock Basis in Example 2" (below).

Normally, the same accountant will calculate an S corporation's AAA and AE&P balance as well as determine the shareholders' bases in stock. However, that will not always be true because calculation of AAA and AE&P is the corporation's responsibility, while keeping track of basis is each individual shareholder's responsibility. In any event, if the corporation has AE&P, AAA must be calculated before stock basis is determined because stock basis is reduced by the nontaxable portion of the distribution that reduces AAA but not by any portion that reduces AE&P.

Distributions received by a shareholder during the year will be tax-free at least to the extent of the lesser of:

Example 3. Making nontaxable distributions to the extent of the lesser of beginning AAA or stock basis: E is the sole shareholder of T Inc., a calendar-year S corporation. T has AAA of $3,000 and AE&P of $5,250 on Jan. 1 of the current year. E's stock basis on that date is $9,500. He has no debt basis. During the year, T distributed $6,500 to E. The only passthrough item on his Schedule K-1 is an ordinary loss from operations of $8,100. The corporation's AAA and AE&P are determined as shown in the table "T's AAA and AE&P in Example 3" (below). 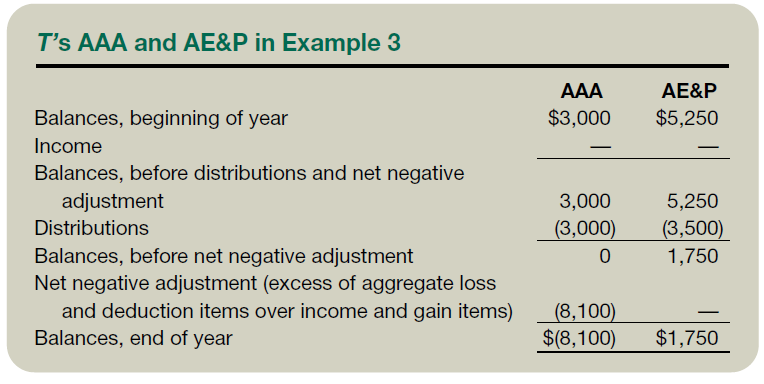 E's stock basis is determined as shown in the table "E's Stock Basis in Example 3" (below).

The $6,500 distribution is nontaxable to the extent it reduced AAA ($3,000) and is a taxable dividend to the extent it reduced AE&P ($3,500). Note that the nontaxable portion is the lesser of the beginning balance of AAA ($3,000) or E's stock basis at the beginning of the year ($9,500), even though the corporation showed an operating loss for the year.

In a year when a loss is anticipated, shareholders may want to receive a distribution in the amount of the beginning stock basis or AAA balance. The availability of funds that are not required in the operation of the business will be a major factor when considering whether the distributions should be made.