As discussed below, an inferred secondary transaction may be in the form of a deemed dividend, a deemed capital contribution, or a deemed loan.

For example, suppose a primary transfer-pricing adjustment increases the taxable income of a U.S. company. If the related party that recorded the excess income prior to the primary adjustment owns stock directly or indirectly in the U.S. company (e.g., a foreign parent company), then a deemed transaction that results in an identical outcome in the cash accounts would be a dividend distribution from the U.S. company to its related party. (See the diagram "Resolve Discrepancy Between Tax Accounts and Cash Accounts Through Secondary Adjustment," below.) The deemed distribution may have tax consequences. Under Sec. 881, the related party would be subject to a 30% tax liability on the distribution, and under Sec. 1442, the U.S. company would be a withholding agent required to withhold the tax. 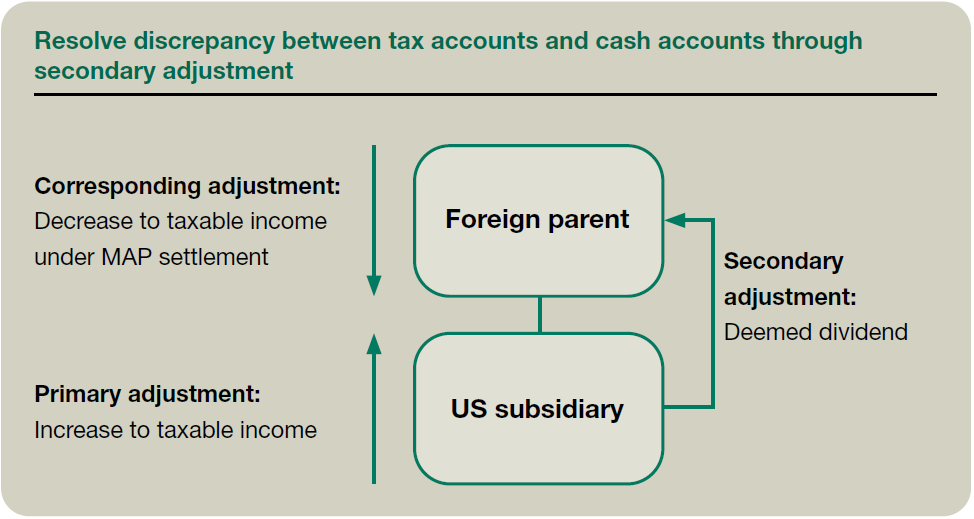 If the U.S. company and the foreign related party are not related by direct or indirect stock ownership (e.g., "sibling companies" with a common stockholder or parent company), then a deemed transaction that results in an identical outcome in the cash accounts would involve both a distribution and a subsequent capital contribution. This would entail the direct and indirect tax consequences associated with the same. (In some jurisdictions, however, a distribution or contribution may be deemed directly between the parties regardless of the ownership structure; see Foley, Taheri, and Sullivan for further details.)

An alternative characterization of a secondary transfer-pricing adjustment is a deemed loan. The taxpayer may treat the entity in the jurisdiction in which taxable income is increased by the primary transfer-pricing adjustment as having made a loan to the related party. The repayment of the loan to the entity with the increased income matches the cash and tax accounts. Importantly, as the repayment of a loan does not create income or a deduction, this deemed loan transaction together with the actual repayment eliminates most tax consequences of the secondary adjustment, particularly any withholding tax associated with a deemed dividend. In the United States, this characterization may be allowed under certain conditions in accordance with Rev. Proc. 99-32. The deemed loan must be repaid within a certain period, typically 90 days from the primary adjustment, and interest must be recognized over the deemed period of the loan, i.e., from the last day of the year to which the primary adjustment relates.

Direct and indirect tax consequences of secondary transfer-pricing adjustments may be different depending on the jurisdiction of the related party, any applicable income tax treaties, or mutual agreements. The introduction of the U.S. participation exemption system as part of the law known as the Tax Cuts and Jobs Act, P.L. 115-97, may in certain cases mitigate adverse effects of secondary transfer-pricing adjustments. For instance, Sec. 245A may allow U.S. corporations to deduct 100% of dividends received from 10%-owned foreign corporations other than passive foreign investment companies. As a result, when the participation exemption applies, U.S. taxpayers may be able to avoid income tax on the inbound deemed dividend or a subsequent repatriation of the outbound deemed capital contribution. 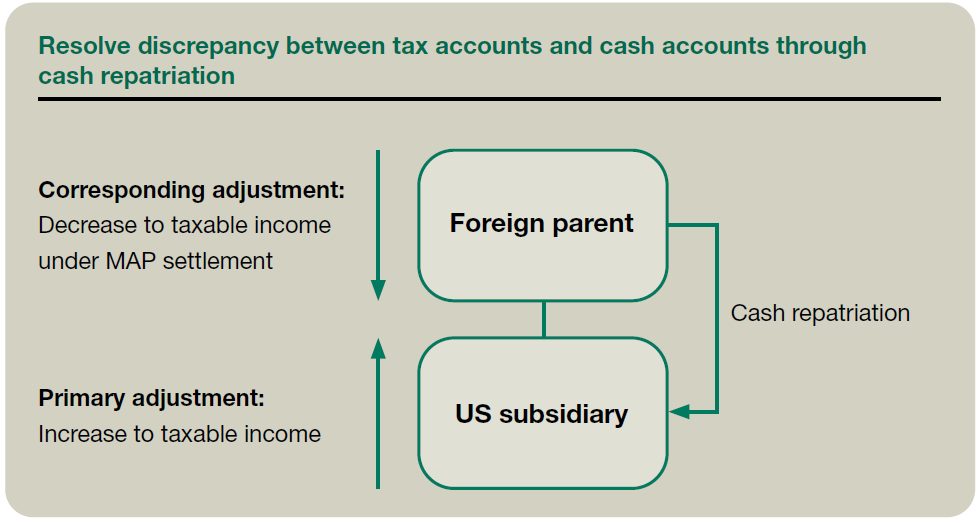 For additional information about these items, contact Ms. Van Leuven at 202-533-4750 or mvanleuven@kpmg.com.

Contributors are members of or associated with KPMG LLP.

The information in these articles is not intended to be “written advice concerning one or more federal tax matters” subject to the requirements of Section 10.37(a)(2) of Treasury Department Circular 230 because the content is issued for general informational purposes only. The information is of a general nature and based on authorities that are subject to change. Applicability of the information to specific situations should be determined through consultation with your tax adviser. The articles represent the views of the author or authors only, and do not necessarily represent the views or professional advice of KPMG LLP.

Implications of legislative changes for R&E and software development costs