Financially troubled since 2001, the Highway Trust Fund might get more than its typical Band-Aid fix with a proposed new funding source that could also kick off comprehensive tax reform.

The Highway Trust Fund supports roads and public transit. While it is funded by six transportation-related taxes, the majority of funding is from the gasoline excise tax. The current system has some structural problems. For one, revenue from the tax can’t keep up with project costs. The federal gasoline excise tax has been set at 18.3 cents per gallon since 1993. If it had been adjusted for inflation, it would be 30.2 cents today.

Another structural problem with the tax is that gasoline usage does not tie directly to road usage. For example, electric cars don’t use gasoline, so their use of the roads doesn’t generate funds for road maintenance. Finally, modernizing aging infrastructure requires increased funding.

This article provides a brief background on the Highway Trust Fund and its funding issues. A Senate Finance Committee (SFC) Tax Reform Working Group recommendation made in July 2015 is explained and critiqued.

The fund includes two accounts: highway and transit, which are funded by six taxes, two of which provide about 85% of its revenue. These taxes have not been increased since 1993 (18.3 cents per gallon on gasoline and 24.3 cents per gallon on diesel fuels). Specifically, according to data from the Congressional Budget Office (CBO), the percentages of current funding sources are shown in the figure below (included in the  SFC’s Tax Reform Working Group on Community Development and Infrastructure’s report). 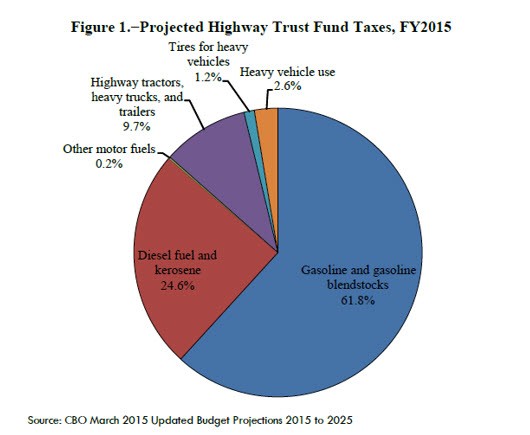 Problems identified in the SFC working group’s report include:

However, the report only includes recommendations for the Highway Trust Fund. In developing its recommendations, the group addressed the following questions it found important:

The SFC working group suggests an interim option for addressing the medium-term funding shortfall. It notes that this option will also help tax reform efforts by making the tax system more competitive. This suggestion involves enacting a “deemed repatriation” to tax the deferred earnings of foreign subsidiaries of U.S. companies (revenue is estimated at over $2 trillion), at a low rate, payable over several years. This option is part of Tax Reform Act of 2014, which was proposed by former Rep. Dave Camp, R-Mich. (H.R. 1, 113th Congress).

From the report: “In the context of tax reform, deemed repatriation could play a very important role to achieving a bipartisan solution to fix America’s roads and bridges, while also overhauling our broken tax code.” Footnote 8 to the report mentions that some group members would likely only support deemed repatriation if it were part of tax reform that broadened the tax base and lowered tax rates.

Deemed repatriation was not viewed as a long-term solution because of the expectation that the Highway Trust Fund’s deficits would continue to grow as a result of people driving less, vehicle fuel efficiency improving, and increasing use of alternative-fuel vehicles.

The SFC working group’s long-term proposal is for some type of vehicle miles traveled (VMT) excise tax, which it notes ties to road usage. The rate (or fixed-dollar amount) can be set to generate the required revenues. It could also be adjusted to account for the time of day the roads are used (allowing increased rates for high-demand times) and the type of road and vehicle, as well as other relevant variables. The SFC working group noted that recent work in Oregon on a VMT indicates that a VMT can protect driver privacy and be simple to administer. The group recommends implementing a nationwide trial VMT without delay because it could take 10 years to implement a VMT, and long-term Highway Trust Fund funding requires this type of approach.

While the SFC working group’s report offers two recommendations that would address shortfalls, these solutions contain some weaknesses and pose some challenges:

In the meantime, continued patching

The shortfall patches that started in 2008 continue. P.L. 114-21 extended the Highway Trust Fund through July 31, 2015, and P.L. 114-41 extended it for another three months (through Oct. 29, 2015). (P.L. 114-41 also included several tax changes, including additional information for mortgage interest reporting, modification of the six-year statute of limitation, and changes in due dates for several tax forms, other than Form 1040. For a summary of these tax changes see Nevius, “Return Due Dates Changed in Highway Funding Bill”; AICPA, chart on “Original and Extended Due Dates”; and Joint Committee on Taxation, Estimated Revenue Effects, JCX-105-15.)

The Highway Trust Fund funding problem is over a decade old. Recent legislation continues to patch the problem for only a few months at a time. More is needed, including adjusting the current excise taxes for inflation and investigating how to connect the tax with road usage for vehicles that don’t use gasoline. The SFC working group’s recommendations are a start. Let’s see what the SFC does next with the report.

Annette Nellen, Esq., CPA, CGMA, is a tax professor and director of the MST Program at San José State University. She is an active member of the tax sections of the AICPA, ABA, and California State Bar. She is a member of the AICPA Tax Executive Committee and Tax Reform Task Force. She has several reports on tax policy and reform and maintains the 21st Century Taxation blog.