Over the years, hybrid financing structures (Structures) have attracted scrutiny from the IRS and Treasury. Structures generally use a combination of hybrid entities and hybrid notes to achieve a “double dip”—i.e., a deduction in two different taxing jurisdictions on the same loan, through intercompany financing arrangements.

Certain entities and notes are considered hybrid based on differences in law of two taxing jurisdictions. For example, an entity may be treated as a corporation for foreign tax purposes and disregarded for U.S. tax purposes. Similarly, an intercompany financing arrangement may be treated as debt for foreign tax purposes and as a capital contribution for U.S. tax purposes. The Service and Treasury have responded to these Structures through a series of administrative rulings and regulations.

In September 2006, the IRS Office of Chief Counsel issued Attorney Memorandum (AM) 2006-001, in which P, a U.S. corporation, wholly owns a foreign disregarded entity (DE) and a controlled foreign corporation (CFC). DE is disregarded for U.S. tax purposes and treated as a corporation for foreign tax purposes. DE and CFC both are organized in Country X (i.e., a country other than the U.S.).

DE borrows from an unrelated third party and lends the cash proceeds to CFC in exchange for a promissory note (note). Simultaneously, P enters into a forward purchase agreement with CFC, in which P will buy CFC stock for the same amount as the note’s principal payment. The forward purchase agreement’s payment terms are tailored to match the note’s payment terms. Interest payments on the note will be paid in CFC stock; see the exhibit below for a diagram of the Structure. The IRS concludes that, for

U.S. tax purposes, the…note and the forward purchase agreement should be considered together with the result that they are not treated as debt. Accordingly, for U.S. tax purposes, P is not required to report the periodic payments with respect to the…note as interest income. 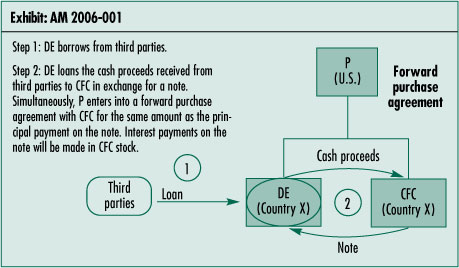 In AM 2006-001, P could take an interest expense deduction for DE’s loan because DE was disregarded (rather than being treated as a foreign corporation) under Regs. Sec. 301.7701-2(a) and -3. In other words, the U.S. treats P and DE as a single entity in which all of DE’s activities are taken into account by P (applying U.S. tax law). Under foreign tax law, DE is treated as a corporation (i.e., a separate taxpaying entity). Accordingly, P deducts the external interest for U.S. tax purposes; DE simultaneously deducts the same amount for foreign tax purposes (Step 1).

DE then advances the borrowed funds to CFC under a hybrid financing arrangement treated as a capital contribution for U.S. tax purposes, but as a loan for foreign tax purposes. CFC issues a note to DE in exchange for the cash proceeds; P simultaneously enters into a forward subscription agreement for CFC shares (Step 2). The forward subscription agreement obligates P to purchase CFC shares for an amount equal to the note’s principal on the date the principal amount is due. For U.S. tax purposes, P and DE are a single taxpayer, which has in substance contributed the proceeds of DE’s borrowings to CFC in exchange for an additional equity interest. CFC then makes interest payments on the note using its common shares, rather than cash. These “interest” payments are, thus, treated as nontaxable stock-on-stock dividends under Sec. 305. The result for U.S. tax purposes is that P takes a deduction for the external interest in Step 1, but does not have a current offsetting income inclusion from Step 2.

In Step 1, DE has a dual consolidated loss (DCL), because it is a “separate unit” of a U.S. corporation with interest deductions that create a net operating loss (NOL). Although the IRS did not address the issue in AM 2006-001, P avoided application of the DCL rules (which would limit the deduction of DE’s NOL in the U.S.) by filing a certification statement under Regs. Sec. 1.1503-2(g)(2). This statement certifies that the NOL DE generated will not be used by any other foreign person under foreign tax law. P could make this certification because CFC was not deducting DE’s loss under a foreign consolidation regime; CFC was instead getting the benefit of an interest deduction on a separate loan from DE to CFC. AM 2006-001 is consistent with earlier IRS Field Service Advices 200145005 and 200206010, in which the Service analyzed hybrid financing arrangements of similar Structures.

Although the IRS did not believe that it could attack the Structure by challenging the equity characterization of the hybrid financing arrangement, it found the Structure’s “double dipping” effect objectionable. On March 16, 2007, Treasury issued final DCL regulations (TD 9315), which, among other changes, target the Structure.

Unless otherwise noted, contributors are members of or associated with PricewaterhouseCoopers, LLP.