Benefiting from a Fiscal Tax Year

By Albert B. Ellentuck, Esq.

Corporations eligible to use a fiscal year should consider it, since preparing tax returns and financial reports outside an external accountant’s peak times may save professional fees. Corporations should also consider their own staff workload when selecting a fiscal year to minimize overtime associated with the year-end closing and preparation of financial statements.

Use of a fiscal or a 52-53-week tax year may provide a significant tax planning opportunity for a C corporation and its shareholders. For example, if a corporation has a January 31 year end and its shareholders each have a December 31 year end, payments such as interest on shareholder loans and bonuses to shareholders can be made late in the corporation’s tax year but prior to January 31. The corporation can deduct these payments on its January 31 tax return; however, the shareholders do not have to report the income until they file their calendar-year returns, creating an 11-month deferral of tax (although income tax withholding or estimated tax payments on the bonuses or interest may offset at least some of this benefit). However, the related-party rules under Sec. 267 may act to limit the ability of the controlling shareholders and the corporation to manipulate the timing of deductions and related income.

Example: T owns C, a C corporation that reports on a January 31 fiscal year end. (C operates a distributorship and so is not a personal service corporation required to use a calendar year.) C has historically averaged $100,000 of business net income, and T has annually drawn a salary from C of $100,000 so as to remove all corporate taxable income. However, for the fourth year of C’s existence, pre-salary income increased to $150,000. In the fifth corporate tax year, the business net income declined to $50,000.

If T’s business reported as a calendar-year entity, the higher fluctuation in income in the fourth year would push income to above-average tax brackets, and the lower net income in the fifth year would result in underutilization of the lower annual tax brackets available to T or his business. But with a fiscal-year C corporation, T can time his annual compensation to balance out the ultimate taxable income consequences within his individual tax return, as shown in the exhibit. 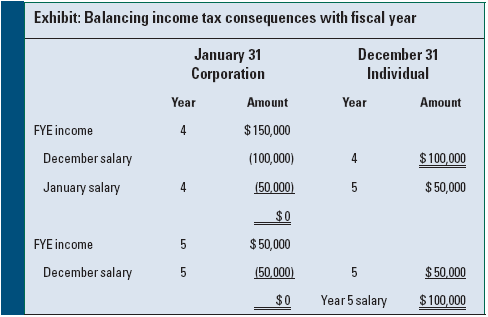 The preceding example assumes that the fluctuating salary amounts remain within the range of reasonable compensation levels. Generally, within a small corporation, where the employee-shareholder’s services are a significant factor in the business’s success, salaries that move in relation to the annual fluctuations in business income, and on average remain within the reasonable range of compensation, will not present a problem.

When business net income is increasing annually, the use of a fiscal year by a C corporation, combined with compensation to the employee-shareholders that is skewed to the portion of the corporate tax year following December 31, can create a substantial and ongoing income tax deferral.

Benefiting from a Natural Tax Year

When selecting a tax year, corporations should consider their own natural business year. Many businesses have a cycle, so certain times of the year are less busy than others. Many corporations choose a tax year corresponding to their natural business cycle, which generally ends just after the business’s highest annual sales period. Year-end financial statements that reflect the natural business year will generally present a more liquid position due to lower inventories and the sales peak just experienced. This may enable an incorporated retailer, for example, to more easily obtain loans to finance inventory purchases or business expansion.

Owners use 52-53-week years so they will have a tax year that always ends on the same day of the week as opposed to the same day of the year (Sec. 441(f)). While adoption of such a tax year by a new corporation has never required IRS approval, a corporation adopting a 52-53-week year must file a statement containing the following information with the tax return for the year the fiscal year is adopted (Regs. Sec. 1.441-2(b)(1)(ii)):

2. The day of the week on which that year will always end.

The preferred tax year is generally chosen for management reasons instead of tax reasons. For example, many retailers use a 52-53-week fiscal year because each month generally has the same number of selling days and Saturdays from one year to the next. This makes comparisons to prior year amounts easier and more meaningful.

Nevertheless, the use of a 52-53-week year can provide significant tax planning opportunities for a C corporation and its shareholders. For example, if a corporation elects a tax year ending on the last Sunday in June but its shareholders each have a December 31 year end, payments such as interest on shareholders’ loans and bonuses to shareholders can be made late in the corporation’s tax year but prior to year end, creating a deferral of tax. However, required income tax withholding or estimated tax payments may offset at least some of this benefit. Furthermore, the related party rules may limit the ability of the corporation and its controlling shareholders to manipulate the timing of deductions and related income.

Albert B. Ellentuck is of counsel with King & Nordlinger, L.L.P., in Arlington, VA.

A resurgence of the accumulated earnings tax?

Cryptoassets: How should proof-of-stake rewards be taxed?