As many practitioners know, Sec. 988 treats most (but not all) gains and losses from foreign currency transactions as ordinary in character. Depending on the taxpayer’s circumstances, this treatment can be favorable or otherwise.

While the full range of exceptions to this rule is beyond the scope of this item, there is one that may be of particular interest to investors. 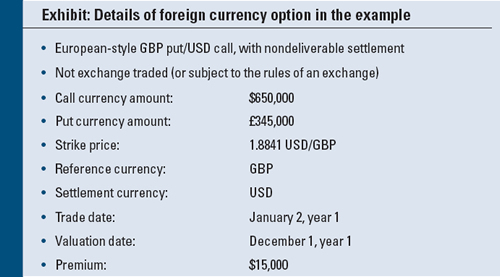 In this example, K pays $15,000 for the right to receive (in cash) the net value of the excess of the U.S. dollar (USD) amount over the U.K. pound (GBP) amount on the valuation date. If there is no net positive excess, no additional money changes hands.

Query: Should this profit be characterized as ordinary income or capital gain? If the latter, what is the holding period? While the answer might seem clear at the outset, getting there is somewhat circuitous and may also require specific action on K’s part in the form of an election by the end of the trade date.

In general, Sec. 988 treats foreign currency gains and losses attributable to a Sec. 988 transaction as ordinary income or loss. Moreover, by its express terms, Sec. 988 overrides any other contrary provisions under chapter 1 of the Internal Revenue Code (Secs. 1–1400U-3, dealing with normal taxes and surtaxes). However, exceptions do apply.

In determining whether a particular arrangement is covered by this rule, Sec. 988(c)(1) treats as a Sec. 988 transaction any specified transaction (e.g., any forward contract, futures contract, option, or similar financial instrument) if the amount the taxpayer is entitled to receive (or is required to pay) by reason of the transaction is determined by reference to the value of one or more nonfunctional currencies. Because the option in this example meets those criteria, it would appear (so far) to constitute a Sec. 988 transaction and presumably give rise to ordinary income.

Next, consider Sec. 988(c)(1)(D), which provides that the acquisition of any forward contract, futures contract, option, or similar financial instrument is not a Sec. 988 transaction if it represents a regulated futures contract or nonequity option that would be marked to market under Sec. 1256 if held on the last day of the tax year.

Under Sec. 1256(g)(1), a regulated futures contract is a contract for which the amount required to be deposited and the amount that may be withdrawn depend on a system of marking to market and that is traded on or subject to the rules of a qualified board or exchange. In the above example, the option is clearly not a regulated futures contract because no amounts were required to be deposited or able to be withdrawn.

Under Sec. 1256(g)(3), a nonequity option includes any listed option that is not an equity option. Sec. 1256(g)(5), in turn, provides that a listed option is one that is traded on (or subject to the rules of) a qualified board or exchange. Sec. 1256(g)(7) further provides that the term “qualified board or exchange” means (1) an SEC-registered national securities exchange; (2) a domestic board of trade designated as a contract market by the Commodity Futures Trading Commission; or (3) any other exchange, board of trade, or other market that Treasury determines has rules adequate to carry out the purposes of Sec. 1256.

While this statutory language is less definitive than some might like, the IRS has provided guidance in identifying certain entities as qualified boards of exchange for purposes of Sec. 1256. Nevertheless, in the example, the foreign currency option was not traded on (or subject to the rules of) an exchange of any sort. Consequently, the option should not constitute a nonequity option.

Having established the option as a Sec. 988 transaction, one of the exceptions to ordinary income/loss treatment is found in Sec. 988(a)(1)(B), which permits taxpayers to elect to treat gains/losses on certain foreign currency arrangements as capital in nature. This exception provides that (unless prohibited in the regulations), among other things, a taxpayer may elect to treat any foreign currency gain or loss attributable to an option that is a capital asset in the hands of the taxpayer and that is not a part of a straddle as capital gain or loss if the taxpayer makes an election and identifies the transaction before the close of the day on which such transaction is entered into (or earlier, as Treasury may prescribe).

Capital asset characterization: In relevant part, Sec. 1221(a) provides the definition of a capital asset as property held by a taxpayer, but it excludes:

With respect to the first item, the investor is not a “commodities derivatives dealer” because he or she is not a person that regularly offers to enter into, assume, offset, assign, or terminate positions in commodities derivative financial instruments with customers in the ordinary course of a trade or business (Sec. 1221(b)(1)(A)).

As for the second item, the option is not a hedging transaction because it was not a transaction entered into by the taxpayer in the normal course of the taxpayer’s trade or business primarily:

Accordingly, because the option does not meet any of the exceptions in Sec. 1221(a), it is a capital asset and eligible for the aforementioned election.

Mechanics of election: Regs. Sec. 1.988-3(b) addresses the requirements of making the Sec. 988(a)(1)(B) capital gain/ loss election. The requirements for that election are as follows: