Annette Nellen, J.D., CPA, received the 2013 Arthur J. Dixon Memorial Award, the highest award given by the accounting profession in the area of taxation. The award, bestowed by the AICPA Tax Division, was presented Nov. 6 at the AICPA fall Tax Division Meeting in National Harbor, Md., by Thomas Purcell, professor of accounting at Creighton University. 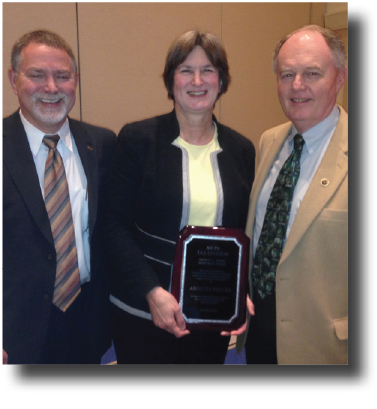 Nellen is a tax professor and director of San José State University’s graduate tax program. Earlier in her career she worked at Ernst & Young, at the IRS, and in industry. She is a nationally recognized expert on tax policy who has testified before the House Ways and Means Committee, the Senate Finance Committee, the California Assembly Revenue and Taxation Committee, and before tax reform commissions and committees on various aspects of federal and state tax reform. In 2000, she served on the academic panel that advised the Joint Committee on Taxation staff for the tax law simplification study submitted to Congress in 2001. She was the lead author of the AICPA’s Tax Policy Concept Statement No. 1, Guiding Principles of Good Tax Policy: A Framework for Evaluating Tax Proposals .

Nellen has been a dedicated volunteer for the AICPA for more than 20 years. She currently serves on the Tax Executive Committee and the Tax Reform Task Force. She has chaired the Individual Income Tax Technical Resource Panel and the Fundamental Tax Reform Task Force. She has also served on the Tax Policy and Simplification Committee, the Worker Classification/Workload Compression Task Force, the Strategic Planning Task Force, the Tax Accounting Committee, and the Sales Tax on Services Task Force. She is also the editor of the Campus to Clients column in The Tax Adviser and is a monthly contributor to two AICPA electronic newsletters: Tax Insider and Corporate Taxation Insider .