Basis Reduction Applies to Each Debt Outstanding at Year End

If the shareholder holds more than one debt at the end of the corporation's year, the basis reduction applies to each debt in the same proportion that the basis of each debt bears to the aggregate bases of all debt (Regs. Sec. 1.1367-2(b)(3)).

No Basis Reduction If Debt Is Not Outstanding at Year End

Debt basis is not reduced by passthrough losses or deductions if the debt has been satisfied, disposed of, or forgiven during the corporation's tax year (Regs. Sec. 1.1367-2(b)). (Even though debt basis cannot be decreased if the loan was fully repaid during the year, it can be increased by the corporation's income under certain conditions.)

Example 1. Increasing previously reduced debt basis by corporate income: G Inc. is an S corporation that incorporated and simultaneously elected S status 11 years ago. At the beginning of the current tax year, P, the sole shareholder, has no stock basis and a debt basis of $33,000. (The note to P has a face value of $50,000, and his debt basis has been reduced $17,000 by losses in excess of stock basis.) P's Schedule K-1 shows the items in Exhibit 1. What are P's stock basis and debt basis at the end of the ­current year?

Capital Contributions Do Not Cause "Net Increase"

Debt basis that has previously been reduced by passthrough losses is reinstated by the current year's "net increase." The net increase is the amount that the current year's passthrough income and gains exceed losses, deductions, and nondividend distributions (Sec. 1367(b)(2)(B)). Capital contributions by the shareholder to the corporation are not included as items of income used in calculating the net increase (Nathel,131 T.C. 262 (2008)).

Adjusting Stock and Debt Basis When Net Amount Is Negative

Example 2. Adjusting stock and debt basis when net amount is negative: Assume the same facts as in Example 1, except the distributions totaled $48,000 instead of $18,000. The netting process would result in a negative amount of $8,000, and P's stock and debt basis would be calculated as in Exhibit 3. 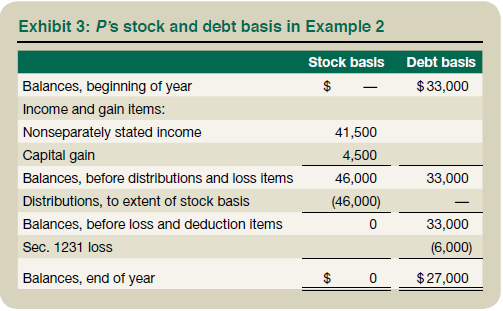 Distributions Do Not Reduce Debt Basis

Nondividend distributions (those not considered to be distributions of accumulated earnings and profits (AE&P)) reduce stock basis but do not reduce debt basis.

Example 3. Distributions do not reduce debt basis: T owns all of the shares of S Corp. an S corporation that incorporated and simultaneously became an S corporation 11 years ago. At the beginning of the current tax year, his stock basis is $10,000 and his debt basis is $50,000. The debt basis has not previously been reduced by passthrough losses. S distributes $23,000 to T on July 1. At year end, T's Schedule K-1 shows nonseparately stated income of $2,000. His stock and debt basis are determined as shown in Exhibit 4.

Making Corporate Payments on Debt, Rather Than Making Distributions

Example 4. Avoiding shareholder gain by making corporate payments on debt: Assume the same facts as in Example 3. The $11,000 of long-term capital gain would be avoided if the corporation had made a $23,000 payment on the debt, rather than making a distribution to T. The loan payment would reduce his debt basis from $50,000 to $27,000, and his stock basis at the end of the year would be $12,000. The transaction should be clearly documented in the minutes and other corporate records as a loan repayment to avoid an IRS argument that the $23,000 ­payment was a distribution instead of debt reduction.