State Tax Consequences to Shareholders on Distributions of Property

For the receiving shareholder, Sec. 301(c) requires that the amount of the distribution first be treated as a dividend to the extent of the company's earnings and profits (E&P), then as a return of basis, and finally as gain from the sale or exchange of property. In the case of a corporate shareholder owning at least 20% of the stock of the distributing company, a special rule under Sec. 301(e) applies to determine the amount of E&P available to fund any dividend, thereby affecting the taxable income of the corporate shareholder. 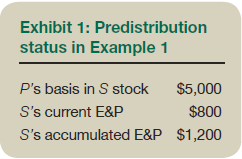 The impact of the distribution on E&P and stock basis is shown in Exhibit 3. 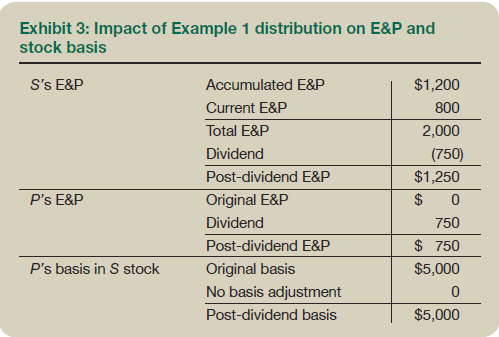 Because there is excess E&P to cover the distribution, Sec. 301(c)(2) basis recovery will not apply. Therefore, P still has $5,000 basis in the stock at the end of the year.

States that follow the federal consolidated-return filing rules: Assuming that P and S are filing a consolidated return and that the distribution occurs in a consolidated-return year, S's E&P is irrelevant. Pursuant to Regs. Secs. 1.1502-13(f), the entire amount of the intercompany dividend is not included in the gross income of the distributee shareholder. Rather, P reduces its basis in the S stock by the full amount of the distribution ($750). Therefore, P's basis in the stock after the distribution is $4,250 ($5,000 − $750). (Note there are certain rare exceptions to this "dividend elimination" rule. For further discussion, see Friedel, "Intercompany Dividends Matter More Than You Might Think," 34 J. Corp. Tax'n 5 (September/October 2007).)

If the distribution exceeds P's basis in the S stock, the remainder of the distribution creates an excess loss account. This is one major difference from a state that has separate-return filing rules pursuant to which, after return of basis, any excess generally results in the current recognition of gain from the sale or exchange of property.

Note also that while P had $150 in taxable income in a separate-filing state, P had no income in a state that follows the federal consolidated-return rules.

States with separate-returnfiling rules: With the transaction date moved up, P and S are now affiliated for every day of 2014 until the distribution is made on July 1, 2014. P now qualifies for a 100% DRD under Sec. 243 because all the E&P funding the dividend was generated in a year in which P and S were affiliated on every day (see Exhibit 4). 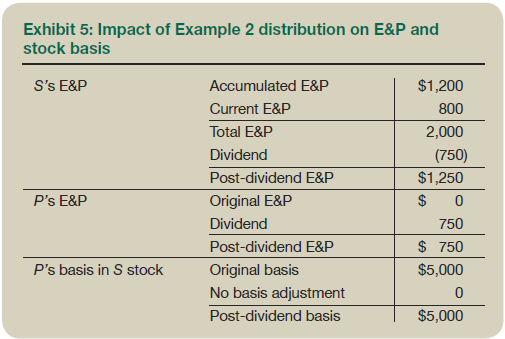 Observation: By changing the date of the transaction, P earns its way to a 100% DRD and eliminates $150 in taxable income.

Most states analyze distributions by first looking at taxable income. For states that apply the federal DRD, the results mostly would be in line with the description above. However, DRD results may differ depending on the starting point for application of Sec. 243 in the state and on application of other state rules that vary from the federal rules.

Moreover, as previously noted, Sec. 243 does not apply to intercompany dividends paid by one member of a consolidated group to another. Therefore, a state DRD is highly likely to differ from what is reported on a federal consolidated form. State corporate tax return preparers should watch for these issues.

Note that Sec. 1059 also applies in Example 1 (although its application was disregarded)—the $750 distribution in Example 1 exceeds 10% of P's basis in the stock, and the distribution occurs within two years of P's acquisition of the stock. In that case, though, P claimed only a DRD of $600 and therefore would have been required to reduce its basis in S's stock from $5,000 to $4,400.

The adjustments required under Sec. 301(e) modify several of the E&P rules under Sec. 312. For instance, Sec. 312(k) ordinarily requires a straight-line allowance for depreciation for purposes of computing E&P. However, Sec. 301(e) "turns off" that part of Sec. 312(k), causing the (typically larger) accelerated depreciation deductions to be taken into account, thus generally resulting in a lower E&P amount to determine the tax consequences of the distribution to the 20% corporate shareholder. For further discussion, see Stalter and Friedel, "Sec. 301(e)—Some Unusual Consequences," 31 The Tax Adviser 463 (July 2000). 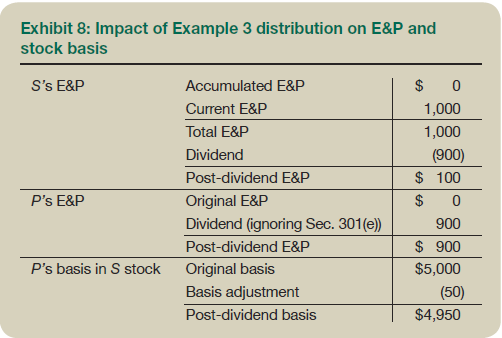 Because S did not have sufficient E&P after the Sec. 301(e) recalculation to cover the distribution, for P, the remaining $50 from the distribution goes to reduce P's basis in the stock, pursuant to Sec. 301(c)(2).

For states that have conformed to the Internal Revenue Code, the above results will be the same on the state tax return. However, as previously noted, if the state has conformed only to part of the Code or has its own provisions that come into play, then a different calculation of state E&P may be necessary, resulting in a different taxable income amount on the state return.

Note that Sec. 301(e) actually applies in all three examples. However, its effect was disregarded in Examples 1 and 2 to facilitate understanding of the nuances that apply when distributions are made to corporate shareholders.

Many subtle differences come into play when a company distributes property to its shareholders, in particular, corporate shareholders. These nuances may cause the state return to differ from the federal return if the state has separate provisions that apply. Therefore, state tax return preparers should be aware of them and how they may cause a corporation's state return to differ from its federal return.

Unless otherwise noted, contributors are members of or associated with PricewaterhouseCoopers LLP.