Is an Anomaly in Form 8960 Resulting in an Unintended Tax on Tax-Exempt Income?

The Patient Protection and Affordable Care Act,1 as amended by the Health Care and Education Reconciliation Act,2 sought to ensure that all Americans have access to quality, affordable health care and was funded in part by a 3.8% tax on the net investment income of individuals, trusts, and estates. The tax went into effect Jan. 1, 2013.

To report the net investment income tax due, the taxpayer must file Form 8960, Net Investment Income Tax—­Individuals, Estates, and Trusts, beginning with the 2013 tax year. With implementation of the tax in its infancy, an unintended anomaly in the calculations on Form 8960 may have slipped through the cracks. A large number of computations in Form 8960, such as for modified adjusted gross income (MAGI), deductions properly allocable to individual taxpayers' income, undistributed net investment income, adjusted gross income (AGI), and deductions properly allocable to trust income contribute to this perhaps unintended result. The anomaly effectively penalizes the taxpayer for allocating part of its portfolio to tax-exempt income-generating assets, which is probably not what Congress intended when it enacted the net investment income tax.

This article first reviews the fundamentals of the net investment income tax and Form 8960. It then describes the anomaly in detail, examines whether Congress intended this result, and proposes solutions to eliminate the anomaly.

For an individual whose MAGI exceeds the threshold amount, net investment income tax is imposed for each tax year at a rate of 3.8% of the lesser of (1) net investment income for that tax year, or (2) the excess (if any) of the taxpayer's MAGI for that tax year over the threshold amount15 ($250,000 for married taxpayers filing jointly (or a surviving spouse), $125,000 for married taxpayers filing separately, and $200,000 for all other individuals).16

Note that for purposes of regular income tax under Sec. 1(e), tax preparation fees are fully deductible against a trust's overall taxable income.21 State and local taxes are also fully deductible against a trust's overall taxable income.22 Legal fees, depending on the reason they were incurred, may or may not be fully deductible.23 Fiduciary fees are deductible, except to the extent allocable against tax-exempt income.24 The difference between the two rules creates a disparity between the amount of state, local, and foreign taxes, and legal, tax preparation, and fiduciary fees deductible on Form 1041, U.S. Income Tax Return for Estates and Trusts, and the amount deductible on Form 8960.

Part I starts by reporting items directly from Form 1040, U.S Individual Income Tax Return, and then adjusting those items up or down to arrive at the individual's27 total investment income.28 For example, if an individual has flowthrough business income of $10,000 from a partnership, which is reported on line 17 of Form 1040, that same $10,000 is reported on line 4a of Form 8960. If the partnership income was from an active trade or business and the partner was an active participant in the business, then the income is not considered net investment income.29 Therefore, line 4b of Form 8960 would show a subtraction of $10,000, resulting in zero taxable income for net investment income purposes.

Part III calculates the net investment income tax due based on the lesser of (1) the individual's net investment income for that tax year, or (2) the excess (if any) of (a) the individual's MAGI for that year, over (b) the threshold amount, which is $250,000 for married taxpayers filing jointly (or a surviving spouse), $125,000 for married taxpayers filing separately, and $200,000 for all other individuals.31

For distributions to beneficiaries that are made up of both net investment income and tax-exempt income, the class system of income categorization under Secs. 651-663 is used to determine the trust's net investment income reduction. According to Regs. Sec. 1.651(b)-1, the trust's distribution deduction does not include items of trust income that are not included in gross income, which means that the distribution deduction is reduced by the allocable portion of any nontaxable income distributed. Using the example from the regulations, if a trust's distributable net income (DNI) is $99,000 but includes nontaxable income of $9,000, then the trust's total DNI deduction under Sec. 651 will be $90,000 ($99,000 - $9,000).

AGI of a trust or estate is defined in Sec. 67(e). To calculate it, one starts with total income reported on line 9 of Form 1041 and subtracts (1) administration costs of the estate or trust (fiduciary fees; attorney, accountant, and return preparer fees; and other deductions not subject to the 2% floor) to the extent they are incurred in trust administration, (2) the income distribution deduction, (3) the amount of the exemption, (4) the domestic production activities deduction, and (5) the net operating loss deduction.37 Note that investment interest expense, taxes, charitable deductions, and miscellaneous itemized deductions are not subtracted when arriving at AGI.

The trust's Form 8960 and the beneficiary's Schedule K-1 complement each other; in theory, combining the two forms should result in taxation of an amount equal to, or less than, 100% of the trust's total net investment income, both distributed and undistributed. Consider the following example:

While theory dictates that the total taxable net investment income on Forms 1040, 1041, and 8960 should match, subtle differences among the three calculations (taxable income, net investment income, and AGI) give rise to results that Congress probably did not intend. Namely, Forms 1040, 1041, and 8960 differ on the deductibility of (1) tax preparation fees; (2) legal fees; (3) fiduciary fees;42 (4) miscellaneous itemized deductions; (5) investment interest expense; (6) charitable deductions; and (7) state and local taxes (see the exhibit below). 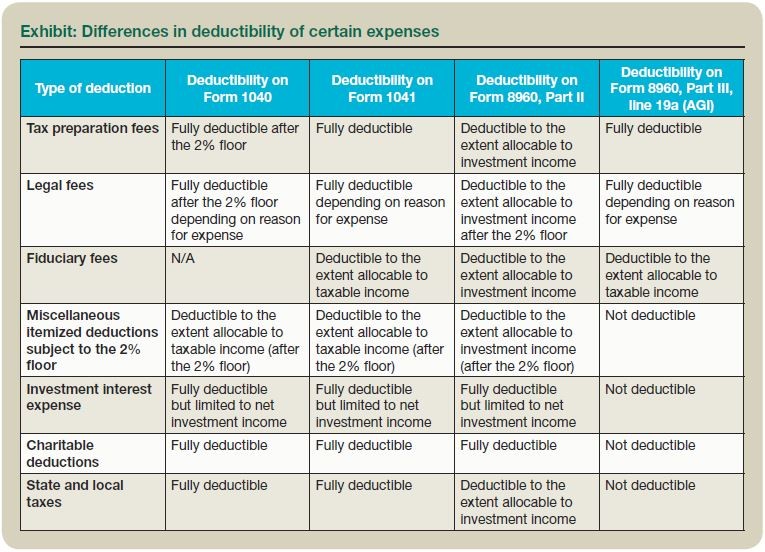 The Anomaly Revealed: A Tax on Tax-Exempt Income?

When the aforementioned disparities in deductibility are applied to an individual or a trust reporting both taxable and tax-exempt income, the result is that the net investment income taxed on Form 8960 is a higher amount than the total taxable income reported on Form 1040 (excluding the individual's exemption) or Form 1041 (excluding the trust's exemption).

Example 3: J (an individual) has the following tax items:

Example 5: The D Family Trust has the following tax items:

Example 6: Consider Example 5 with $40,000 of tax-exempt interest income added to all of the D Family Trust's tax items.

In the above example of the D Family Trust, the nondeductible portion of the tax preparation fees is less than miscellaneous itemized deductions (adjusted for the 2% floor). Consequently, the trust's AGI over the threshold amount exceeds its undistributed net investment income. However, even when the trust's miscellaneous itemized deductions are less than the nondeductible portion of professional fees and its undistributed net investment income exceeds its AGI over the threshold amount, the lesser of the two will still exceed the trust's total taxable income reported on Form 1041.

Example 7: Assume the D Family Trust has the same tax items (including the tax-exempt income), except tax preparation fees are increased to $50,000.

The example of the D Family Trust implicates tax preparation fees and miscellaneous itemized deductions in causing the anomaly. However, the anomaly will appear when any combination of items not deductible against AGI amount to a total greater than the trust threshold amount. Those items include investment interest expense, state and local taxes, and charitable deductions.

In a portfolio consisting of both taxable and tax-exempt income, the anomaly results in an effective net investment income tax on income that should be completely tax-exempt. The result is inconsistent with general tax principles that ownership of tax-exempt obligations should not increase a taxpayer's federal tax liability. In addition, the IRS interpreted the statute as excluding interest on state or local bonds when it issued Regs. Sec. 1.1411-1(d)(4)(i). 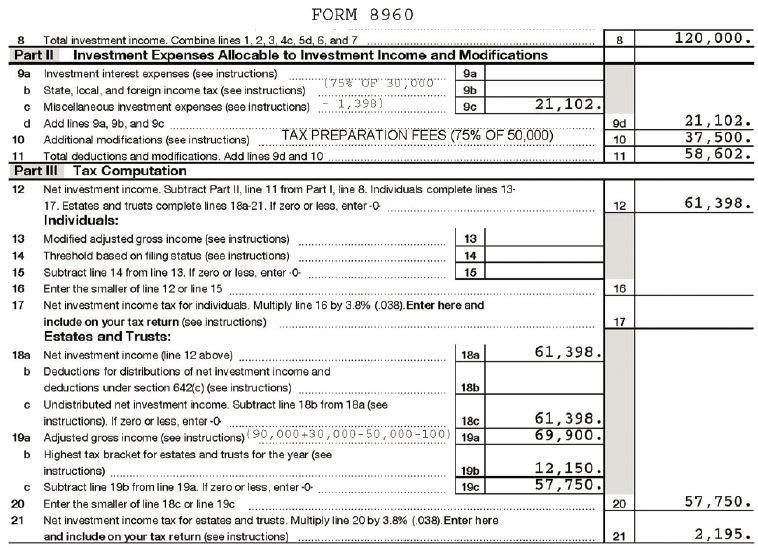 Why the Anomaly Exists and What Can Be Done About It

The anomaly occurs as a result of inconsistency in deductibility of the items to determine taxable income on Forms 1040 and 1041 and net investment income on Form 8960, and it appears regardless of whether a trust distributes net investment income to beneficiaries. The discrepancy in deductibility occurs because Form 8960 ultimately draws from three different areas of the Code: Chapter 1, Subchapter B; Chapter 1, Subchapter J; and Chapter 2A. While Form 8960 attempts to reconcile the differences among the three, the anomaly shows that some refinement may be necessary.

The easiest way to eliminate the anomaly would be to amend Regs. Sec. 1.1411-4(g)(1) to state: "In the case of a properly allocable deduction described in section 1411(c)(1)(B) and paragraph (f) of this section that is allocable to both net investment income and excluded income (except for tax-exempt income), the portion of the deduction that is . . ."

This amendment would effectively eliminate the anomaly while maintaining the integrity of the limitation on deductions against other excluded income.

Congress clearly did not intend the net investment income tax to extend to tax-exempt investments.52 What is not clear is whether Congress intended to increase the amount of regular income, taxed for purposes of net investment income, when the portfolio consists of tax-exempt investments. This possible unintended result inadvertently penalizes taxpayers based on their investment choices. If this result was not intended, repairing the anomaly and aligning Form 8960 with congressional intent would most likely require amending the regulations.

3Except for distributions from qualified plans under Sec. 1411(c)(5).

18Sec. 212(1); IRS, "Questions and Answers on the Net Investment Income Tax," Q&A 13, available at www.irs.gov. Sec. 67(a) allows the amount of miscellaneous itemized deductions only to the extent that the total of those deductions exceeds 2% of AGI.

27The term "individuals" refers to all natural persons who are U.S. taxpayers, regardless of filing status.

29Discussions of Sec. 469 passive activity rules are beyond the scope of this article.

33The deductions disallowed against foreign income excluded under Sec. 911(a).

42Only applicable to trusts.

45This amount represents the deductible portion of state taxes paid during the year.

49The amount at which the highest tax bracket begins for trusts under Sec. 1(e).