Many individual taxpayers invest in passive activities. Often, these activities generate tax credits. Understanding the limitations on the use of passive activity credits is a key element in providing sound tax advice to clients. Clients are typically excited by the prospects of tax credits but fail to realize the limitations—and are sometimes surprised to learn they receive no current-year tax benefit.

The Sec. 469 rules regarding the use of passive activity credits are complex. The 2014 version of Form 8582-CR, Passive Activity Credit Limitations, has 16 pages of instructions and nine worksheets to determine the allowable passive activity credit. Most allowable credits must also meet the Sec. 38 general business limitations. The flowchart below provides a quick way to visualize the requirements the credits must meet and the limitations imposed on them before they can be deducted against current-year tax. 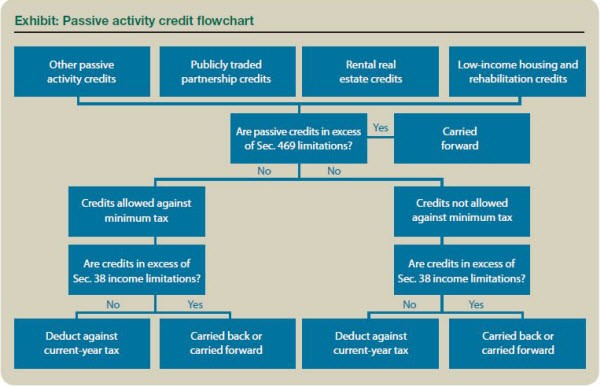 The first type of credits the flowchart lists, "Other passive activity credits," includes common business credits, such as the work opportunity credit, credit for increasing research activities, and the credit for employer Federal Insurance Contributions Act (FICA) taxes paid on certain tips. These credits are limited to the tax equivalency of net passive income. Tax equivalency is the amount of income tax attributable to the net passive income. If net passive activities produce a loss, the credits are suspended and carried forward to the next tax year.

The tax-equivalency computation, fortunately, is straightforward. It is the difference between the tax on taxable income with and without the net passive income. Taxable income does not have to be refigured for those items based on a percentage of adjusted gross income (AGI). In other words, one should ignore the effect of phaseouts and look strictly at tax brackets.

A fifth type of passive activity credit, the foreign tax credit, is not subject to the Sec. 469 limitations.

The second difference between passive losses and credits is that the at-risk rules apply only to losses but not to credits. As a result, where the taxpayer's loss in the activity is limited by the at-risk rules, if the taxpayer has sufficient passive income from other activities, the credits could be used.

Meeting the Sec. 469 limitation is the first step in determining deductibility. The allowable passive activity credits after the Sec. 469 limitation are determined on Form 8582-CR for noncorporate taxpayers and Form 8810, Corporate Passive Activity Loss and Credit Limitations, for corporate taxpayers. The taxpayer's allowable passive activity credits are then subject to the Sec. 38 general business credit limitation, whichlimits them based on tax liability. The Sec. 38 limitation is calculated on Form 3800, General Business Credit. It is the taxpayer's "net income tax" (the sum of regular tax and alternative minimum tax, less any other allowable credits) over the greater of (1) tentative minimum tax, or (2) 25% of the taxpayer's regular tax in excess of $25,000. For example, if a taxpayer has regular income tax of $100,000 and no alternative minimum tax and other allowable credits, the general business credit cannot exceed $81,250 ($100,000 − $18,750 [($100,000 ‒ $25,000) × 25%]) (assuming $81,250 is greater than the taxpayer's tentative minimum tax).

Other credits can reduce both regular and alternative minimum tax, so, in essence, the tentative minimum tax limitation does not apply to these credits. A listing of the credits, referred to as "specified credits," can be found in line 4 of Part III of Form 3800, with the employer FICA tip credit probably being the most common credit.

General business credits are considered in a specific order, and if the full credits are not used in the current year because of the tax limitations, the unused credits can be carried back one year and, after the carryback, any remaining credits may be carried forward 20 years until used. The order in which credits are used is listed in the instructions to Form 3800.

Mark Heroux is a principal with the Tax Services Group at Baker Tilly Virchow Krause LLP in Chicago.

For additional information about these items, contact Mr. Heroux at 312-729-8005 or mark.heroux@bakertilly.com.

Unless otherwise noted, contributors are members of or associated with Baker Tilly Virchow Krause LLP.