The Common Reporting Standard (CRS) is the standard for automatic exchange of financial account information (AEOI) developed by the Organisation for Economic Co-operation and Development (OECD). CRS is a broad reporting regime that draws extensively on the intergovernmental approach to the implementation of the Foreign Account Tax Compliance Act (FATCA), P.L. 111-147, and, similar to FATCA, CRS requires financial institutions resident in participating jurisdictions to implement due-diligence procedures, to document and identify reportable accounts, and to establish a wide-ranging reporting process.

On July 21, 2014, the OECD released the first version of the Standard for Automatic Exchange of Financial Account Information in Tax Matters, which contained the different model competent authority agreements (MCAAs) to be signed by the participating jurisdictions (including a multilateral MCAA, a bilateral MCAA, and a nonreciprocal MCAA); the CRS itself, which provided the documentation and due-diligence rules applicable to the financial institutions; as well as commentaries on the provisions of the MCAA and the CRS user guide. By December 2015, over 95 jurisdictions signed or were committed to sign the CRS. More than 50 jurisdictions are considered "early adopters," which means that they will exchange information on financial accounts automatically starting in 2017. The rest of the jurisdictions have committed to automatically exchange information starting in 2018.

Reporting financial institutions in non-early-adopter jurisdictions generally will need to implement CRS requirements starting Jan. 1, 2017, to collect the information that will be exchanged by their jurisdiction in 2018. Likewise, they will need to complete the review process for preexisting accounts one year later. (See the exhibit below for a timeline of key CRS implementation dates.) 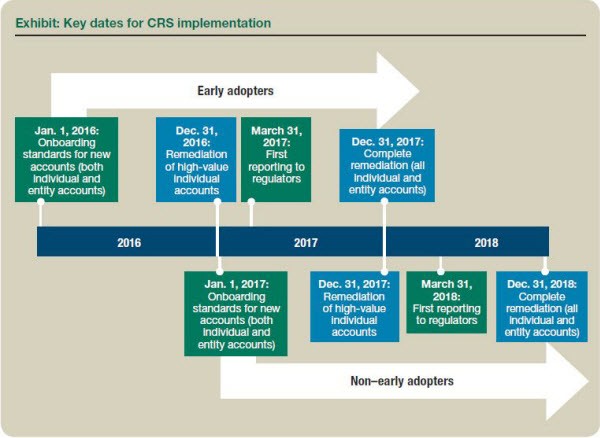 Differences Between CRS and FATCA

Despite the fact that CRS draws extensively on the Model 1 Intergovernmental Agreement (Model 1 IGA) approach of FATCA, there are key differences that require specific onboarding, remediation, and reporting enhancements and processes. For example, the scope of CRS is broader than FATCA as it aims to identify tax residents in any of the 95-plus jurisdictions participating in CRS. Furthermore, the account scope may be significantly greater than FATCA's because most thresholds applicable under FATCA are not applicable within CRS, and the categories of entities that have to provide information on controlling persons are broader. IRS forms (e.g., Forms W-8 and W-9) are generally not acceptable, and reporting financial institutions will need to collect specific self-certifications covering the CRS requirements (e.g., CRS self-certifications need to allow the account holders to certify multiple tax residencies or provide CRS classifications that differ from FATCA).

Finally, unlike FATCA, CRS does not impose a withholding requirement. Instead, CRS enforcement will be handled by each of the jurisdictions adopting CRS that will be required to establish an audit and penalty regime for lack of compliance with the rules.

One important challenge associated with CRS is that even though the standard intends to impose uniform requirements across the jurisdictions adopting this new global information reporting regime, the reality is that each jurisdiction is entitled to exercise different options and expand the minimum requirements established in the standard. In addition, the residency definitions and data privacy and protection rules can vary from country to country. As a result, stakeholders will need to monitor the rules, guidance, approach, reporting forms, etc., that each jurisdiction releases.

The United States has neither signed nor committed to sign the CRS. According to the most recent Status of Commitments for AEOI (a list that summarizes the intended implementation timelines of the new standard by all the jurisdictions that have signed or are committed to sign CRS) released by the OECD's Global Forum on Transparency, the United States has indicated that it will be undertaking automatic information exchanges under FATCA beginning in 2015, which means it will achieve equivalent levels of reciprocal automatic information exchange with certain partner jurisdictions. It also highlights that these IGAs include a political commitment to pursue the adoption of regulations and to advocate and support relevant legislation to achieve the equivalent levels of reciprocal automatic exchange.

Investment vehicles, including investment funds and trusts in the United States, generally will be treated as investment entities managed by another financial institution. Therefore, U.S. investment vehicles and funds may fall within the scope of the passive NFE definition and may need to identify their controlling persons.

It is specifically recognized in the CRS Commentaries that collective investment vehicles may qualify as passive NFEs with controlling persons that are reportable persons. It should also be noted that according to the CRS Commentaries, each of these controlling persons needs to sign (or positively affirm) its own information. This directive may be interpreted to mean that those U.S. investment vehicles and investment funds will likely need to provide self-certifications from their controlling persons. Under this requirement, when U.S. investment entities have any financial accounts (including equity or debt interests) in a participating jurisdiction (e.g., the Cayman Islands), they will need to provide self-certifications for both the entity and the controlling persons to the counterparty where they maintain the accounts.

Due to the complexity of these rules, financial institutions incorporated inside and outside the United States should assess the CRS rules and determine how they are affected. Knowledge of how other countries have adopted the standard may allow financial management professionals to provide beneficial guidance to their clients and their operations team on how to follow reporting and compliance rules in participating jurisdictions.

For additional information about these items, contact Mr. Brosseau at 202-661-4532 or abrosseau@deloitte.com.

Unless otherwise noted, contributors are members of or associated with Deloitte Tax LLP. This publication contains general information only and Deloitte is not, by means of this publication, rendering accounting, business, financial, investment, legal, tax, or other professional advice or services. This publication is not a substitute for such professional advice or services, nor should it be used as a basis for any decision or action that may affect your business. Before making any decision or taking any action that may affect your business, you should consult a qualified professional adviser. Deloitte, its affiliates and related entities, shall not be responsible for any loss sustained by any person who relies on this publication.