Will “A Better Way” for a Confident America Lead to Tax Reform?

Words have meaning. However, some words can have multiple meanings. For instance, the term blueprint has two distinct meanings: one, a detailed plan for a building or a machine that historically was printed with white lines on a blue background; and two, a complete plan or vision that demonstrates broadly how something is to be developed or performed. The definitions, while similar, differ in scope. From a Washington, D.C., perspective, when the term blueprint is used by Congress, it seldom refers to detailed plans, but rather it is almost exclusively used to define a set of principles and ideas that provide direction for future legislation while omitting the underlying details.

It is well-settled that, in a political setting, visioning is far safer than mapping out a detailed strategy. Detailed plans require lines to be drawn in the political sand that can attract political allies on the one hand and alienate political foes on the other. The drafters know this and deserve credit for putting forth fairly provocative concepts in the "Blueprint" that will no doubt create great debate and take a political toll.

However, to be fair, Congress historically has tended to be much more efficient in the eventual passage of legislation by gathering consensus about ideas upfront rather than waiting to do so when the underlying details have been completed.

All else being equal, Congress prefers to measure twice and cut once in terms of political effort when it comes to granular details of a tax bill. Obtaining conceptual buy-in upfront and filling in the details later often is most effective. Tax reform efforts in the 114th Congress have followed this well-prescribed model.

On June 24, 2016, Ways and Means Committee Chairman Kevin Brady, R-Texas, issued the final document in a series of vision statements by House Republicans titled A Better Way: Our Vision for a Confident America (available at abetterway.speaker.gov). This 35-page tax plan, which is self-described as a "Blueprint," promises to "deliver a better way on tax reform that will help all Americans have more and better opportunities in their lives." This Blueprint document was drafted by a task force composed of members of Congress and their staff. In fact, the House established six similar task forces each with a unique stated objective to construct a bold, pro-growth agenda that could be followed, dealing with six key areas including national security, health care reform, and tax reform.

The congressional Blueprint is primarily a tax reform conceptual vision document that does contain some limited specific tax reform measures used for illustration purposes. The Blueprint is designed and intended to create debate and gather input on the important tax policies and potential outcomes impacted by the ultimate underlying legislative text of a final bill.

Instead of accepting one of these traditional approaches, the Tax Reform Task Force strongly advocated developing a major tax reform initiative that would promote economic growth without increasing the federal deficit. While most of Washington is not taking a stance on the overall concept, there does seem to be great interest in the underlying provisions.

It is often said that where a person stands on an issue depends on where he or she sits. What strikes tax experts as the most difficult part of achieving comprehensive tax reform, like that proposed in the Blueprint, is persuading special interest groups to abandon some provisions they hold dear. Most groups or individuals have favorite tax deductions, credits, or exclusions. One taxpayer's loophole is another taxpayer's burden. It is easy to agree on global tax reform just as long as Congress does not cut anyone's favorite provision, and therein lies the rub. How can Congress achieve comprehensive reform in theory while obtaining collective support in practice?

So what does the future of comprehensive tax reform look like? The House Republicans' Blueprint demonstrates what compromises would be necessary by focusing on four basic areas, which it labels:

Simplification for American Families and Individuals

Among other things, the Blueprint eliminates the alternative minimum tax (AMT) for individuals, consolidates the tax rates from seven brackets to three, lowers the top bracket to 33%, and abolishes the estate tax and the generation-skipping transfer tax. The 3.8% net investment income tax would be repealed, and all investment income (interest, dividends, and capital gains) would be taxed at half the rate it would normally be taxed at each particular bracket. Standard deductions, personal exemptions, and child tax credits would be combined into a larger standard deduction and larger child and dependent tax credits. The only itemized deductions that would remain after reform would be for charitable contributions and mortgage interest.

All of these changes, especially the increase of the standard deduction, would reduce the number of taxpayers taking itemized deductions from approximately one-third to only about 5% of all individual taxpayers. The drafters hope this proposal would finally allow a large majority of U.S. taxpayers to file individual tax returns on a "postcard" (see the exhibit below). 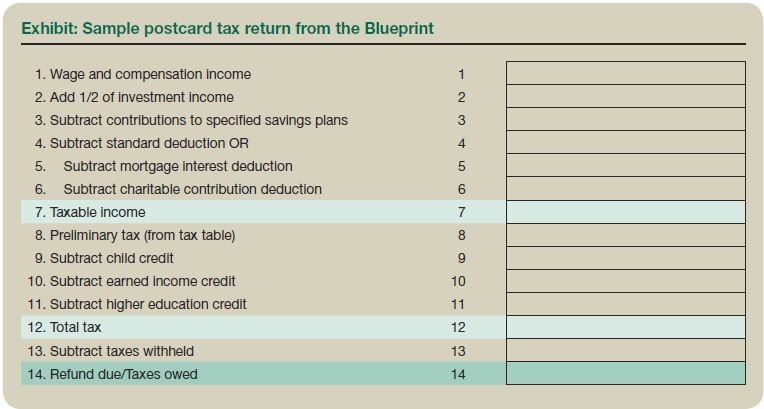 Several other key tax provisions in need of reform, such as education and retirement incentives, are also noted as areas that need to be studied.

Competitiveness and Growth for All Job Creators

The Blueprint would provide all businesses, no matter their size, with full and immediate write-offs of their investments in both tangible and intangible assets (except for land). Thus, the need to maintain depreciation records for federal income tax purposes could potentially go away. This change, of course, would not eliminate the need to maintain these records potentially for state income or property tax purposes.

The Blueprint would limit the tax rate that applies to active small business and passthrough income to the 25% bracket. The corporate rate would be a flat 20%, and the corporate AMT would be repealed. In this way, the gap between tax rates for flowthrough entities such as partnerships and S corporations and those assessed against a C corporation would be reduced. The double-taxation attributable to the operations of a C corporation would still exist, but the total tax burden would be significantly reduced.

Perhaps most notably, Congress would also eliminate the ability of businesses to deduct interest expenses beyond their reported interest income so that businesses would not receive a deduction for the interest paid on money borrowed to finance their operations much as they do not receive a deduction today for dividends paid on equity capital invested in their business. The Blueprint attempts to make the tax consequences of capital funding (debt vs. equity) a neutral factor.

In an attempt to reform international tax laws, the United States would change from a global regime to a territorial regime. The United States would also move to a destination-based and cash-flow-based tax system that would impose tax based on the location of consumption rather than the location of production. This means that sales to U.S. customers would be taxed by the United States, and sales to foreign customers would be exempt from U.S. taxes, regardless of whether the taxpayer-company is domestic or foreign. This change would bring U.S. international tax laws more in line with the rest of the nation's major trading partners. The belief is that this change, along with the corporate rate reduction, would significantly reduce the incentive for U.S. businesses to invert, transfer capital or valuable intellectual property offshore, or otherwise create elaborate offshore legal structures.

A New IRS for the 21st Century

The Blueprint also envisions a new collection agency for the government that is much more service-focused and concentrates its effort in three main areas: families and individuals, businesses, and a "small claims court."

With a simplified tax code, a revamped collection agency would spend far less time on issue resolution and more time on taxpayer service. The new IRS mission statement would be "Service First." This goal is one that many practitioners and taxpayers have supported for a long time.

While it is politically popular to discuss the reformation and transformation of any U.S. government agency, particularly the tax collection arm of the government, one should realize how monumental this task would be if attempted.

The Ways and Means Committee is inviting comments and ongoing dialogue with stakeholders, including families, workers, and job creators. Knowing the political toll and immense effort required just to initiate this level of serious tax reform debate, their efforts should be applauded. Passage of this type of legislation is extremely unlikely in the current Congress because it is an election year, and little time remains in this session. However, what is critical is the discussion. The Blueprint marks the second time in as many congressional sessions that substantial comprehensive reform has been proposed and discussed. Those stakeholders, such as CPAs who are on the front line of many of these issues, should use this opportunity to become informed on the current proposals and weigh in now so they can shape tax reform for tomorrow. At some point in the near future, some, if not all, of these and similar provisions could find their way into tax legislation. The time to speak is now when Congress is willing to listen—not after decisions have been made.