As provided for in Sec. 901, in general, U.S. citizens, corporations, and certain resident aliens can claim a foreign tax credit (FTC) against income tax that they paid or accrued to foreign countries and U.S. possessions; this helps U.S. taxpayers avoid a double tax, since the United States taxes foreign income. Regs. Sec. 1.901-1(b) lists sections of the Code that impose limitations on the credit, the one most relevant to this article being Sec. 904(a), which limits the credit to the amount of tax that would have been paid to the United States on the foreign income. To meet that limitation, per Sec. 904(b)(2)(B), taxpayers may have to make certain adjustments to foreign capital gains and losses when reporting them.1

To calculate the adjustments, practitioners may also have to drill down and further partition income categories into tax rate groups: 28%, 25%, 20%, 15%, 0%, and short-term. So, for example, a taxpayer might have a passive income 20% capital gain, in which case the income category is passive and the rate group is 20%.

There are two overall types of adjustments for foreign capital gains and losses:

After the U.S. capital loss adjustment, taxpayers must make the capital gain rate differential adjustment to further reduce foreign long-term (but not short-term) capital gains and also capital losses, by multiplying a portion of them by a percentage.

How much of a rate group's net long-term capital gain, remaining after the U.S. capital loss adjustment, must be adjusted by the capital gain rate differential adjustment? Publication 514 for 2016, page 18, states:

If taxpayers have Form 1116 income category rate groups with net long-term capital gains, they do the following:

The remaining portion of net capital gain in the separate category long-term rate group must be entered on line 1a of Form 1116 without adjustment. Notice that if there is no net long-term capital loss from U.S. sources, this results in adjusting the entire amount of the long-term net foreign capital gain.

Example 2: Now revisit D's situation from Example 1 (after he applied the U.S. capital loss adjustment), as shown in the table "D's Capital Gains and Losses After U.S. Capital Loss Adjustment," below. 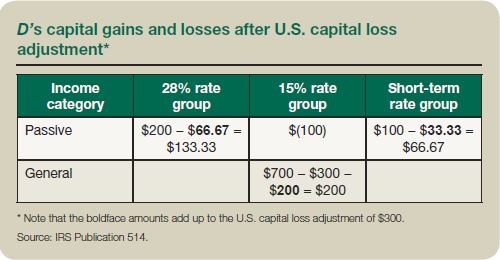 For this scenario do not take into account any capital gain rate differential adjustment reduction made to any foreign net capital gain, above. If an income category rate group has a net capital loss, taxpayers must adjust that loss by netting it against U.S. and foreign capital gains, as follows:

To determine which capital gain(s) should be offset by a rate group's net capital loss, use the following steps:

Any net capital losses in a rate group are treated as coming pro rata from the income categories that have net losses in that same rate group, to the extent netted in Step 1 or Step 3. (See example below.)

To the extent the net capital loss in a rate group offsets (equals) a capital gain in the:

Include the results on line 5 (losses from foreign sources) of the applicable Form 1116. The amount of loss that does not offset gains is included, without adjustment, on Form 1116, line 5.

Any net capital losses in a rate group are allocated pro rata to the income categories (in this case, passive and general) that have net losses in that rate group; therefore:

Step 4: Apply the capital gain rate differential adjustment and include on Form 1116, line 5:

1For a detailed explanation of the adjustment math, see Vermeer, Korb, and Sigler, "How Reduced Rates for Capital Gains and Qualified Dividends Affect the FTC," 37 The Tax Adviser 414 (July 2006).