While professionals in all walks of life are prone to swap views on the relative merits of their tools of the trade, among CPA tax preparers, tax return preparation software generates often extensive and ardent discussion. Return preparers depend on their software to accurately apply U.S. federal and state tax laws, a highly complex procedural and computational task. So the The Tax Adviser and JofA are pleased once again to facilitate and, hopefully, distill this shop talk, with our annual survey of preparers' ratings, likes, and dislikes of their tax preparation software.

We also asked for a third year about clients' tax-related identity theft and saw, for the second year in a row, a sharp decrease in reported incidence of this problem from the 2016 tax season, when it was reported by nearly 60% of respondents (see the sidebar "Taxpayer ID Theft Further Recedes," at the bottom of this article). And, looking ahead, we asked whether respondents had discussed with clients selected new provisions of the tax reform legislation known as the Tax Cuts and Jobs Act (TCJA), P.L. 115-97, learning which were uppermost in CPAs' client communications during the 2018 tax season (see the sidebar "TCJA Provisions Discussed With Clients," at the bottom of this article).

The survey asked about 13 tax software products, and, as in previous years, seven products garnered significant numbers of responses: ATX (6% of respondents), CCH Axcess Tax (4%), and CCH ProSystem fx (16%), all from Wolters Kluwer; Drake (14%), by Drake Software; Lacerte (17%) and ProSeries (13%), both products of Intuit Inc.; and UltraTax CS (19%), by Thomson Reuters. The remaining approximately 11% of respondents were divided among the remaining six products and write-in entries (1.2%), which are summarized here. For last year's results, see "2017 Tax Software Survey."

This year, firms of five or fewer practitioners accounted for 74% of users of all products, with 17% in firms of six to 20 practitioners, nearly 6% in firms of 21 to 100, and firms of more than 100 accounting for a little over 3%. The number of sole practitioner respondents was higher than last year by more than six percentage points, which may account for slightly higher shares this year than last of products favored by sole practitioners and small firms (see the table "Favorites by Firm Size." below). Among these single-member tax firms, Drake was the predominant major product (nearly 27% of respondents who said they used one of the seven major products), followed by ProSeries (22%), and Lacerte (nearly 16%). Users of UltraTax CS, CCH ProSystem fx, and Lacerte were well-represented among firms of between two and 20 preparers. CCH ProSystem fx was used by a majority of respondents in firms of between 21 and 500 preparers, as was CCH Axcess Tax among the largest firms, those of more than 500 preparers.

Individual returns accounted for most of the workload of a majority of users of any of the seven major products; 77% reported that a majority of the returns they prepared in 2018 were for individuals. For the vast majority of respondents (90%) business returns were 50% or less of all returns they prepared. Users of CCH Axcess Tax and CCH ProSystem fx reported preparing the highest percentages of business returns. CCH Axcess Tax was the only product for which a significant percentage of respondents (19%) were in firms that prepared more than 5,000 returns (for clients of all types). CCH ProSystem fx was the next highest, with 5%. Both those products also prevailed among firms preparing between 2,000 and 5,000 clients' returns.

Involvement in selecting the software

In keeping with their predominant use by large firms, CCH Axcess Tax and CCH ProSystem fx were the least likely to have been chosen by the respondent; 37% of CCH Axcess Tax users and 21% of CCH ProSystem fx users said they were not involved in the decision to use those products, compared with single-digit percentages for the other major products. The products most likely to have been solely selected by the respondent were ATX (93%) and Drake (92%), followed by ProSeries (89%).

Overall satisfaction with all the major products combined was 4.4 out of 5 with little deviation among them (see the table "Overall Ratings," below). Drake users gave it a slightly higher overall rating on average of 4.6, and those using CCH Axcess Tax lower at 4.1. Scoring slightly higher than average for ease of use were Drake and ATX (both 4.5), along with ProSeries and Lacerte (both 4.4). However, Drake and ATX scored lower than others for integration with accounting and other software (3.3 and 3.2, respectively). CCH Axcess Tax and UltraTax CS led the field in this attribute at 3.7 and 3.8, respectively, as well as for ease of importing data (both 3.8). ATX rated a little lower (3.3) than others at this task. E-filing was regarded as relatively efficient by users of all products, with a slight edge accorded to Drake and ATX (4.8 and 4.7, respectively). 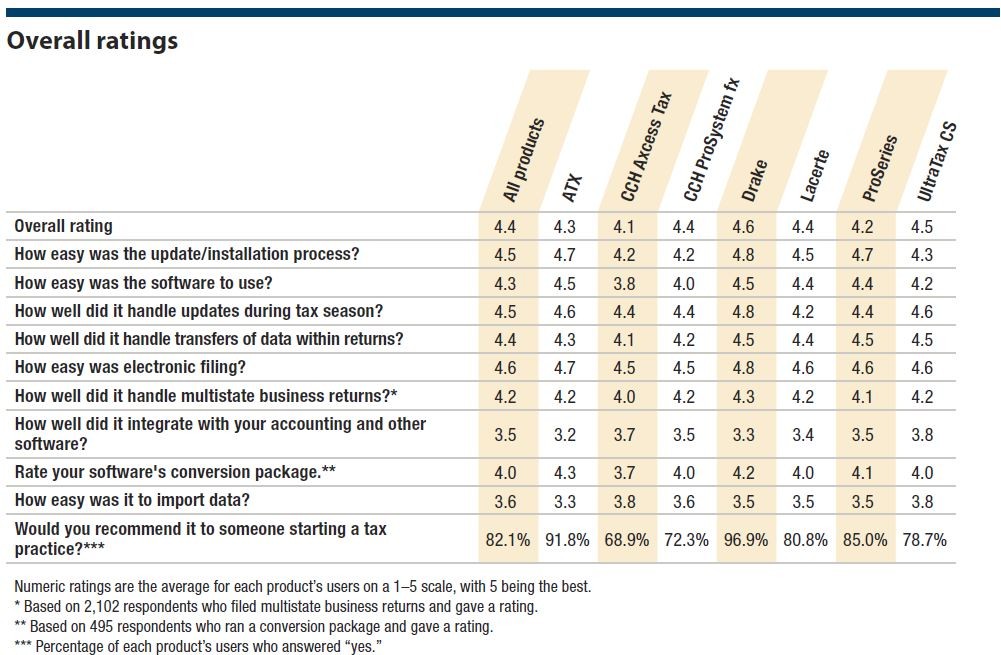 Best for a new practice

We asked whether users would recommend their software to someone starting a tax practice. Here, Drake users gave a nearly 97% thumbs-up, followed by ATX (92%). Consistent with the findings reported above for CCH Axcess Tax and CCH ProSystem fx, those products were less often regarded by their users as suitable for startups (69% and 72%, respectively).

As in past years, we asked CPAs to select three best-liked qualities of their tax software from among 11 (and allowed write-ins) (see the table "Top Likes," below). These opinions are generally consistent with last year's. The top best-liked feature of all major products combined was accuracy (20% of users chose it). Users of Drake and ATX were much less likely to see accuracy as a prime virtue, however, at 7.5% and 8.4%, respectively. The next highest percentage of "likes" for all major products combined was ease of use (nearly 20%). ProSeries users liked this quality most often at nearly 28%, followed by Lacerte at nearly 25%. Drake users were much more likely than others to pick support as a best-liked feature (26%, nearly double the average for all major products). Users of CCH Axcess Tax and CCH ProSystem fx liked those products' number of forms and comprehensiveness (30% and 27%, respectively, versus 18% for all major products).

The survey also asked separately whether users' software contained all necessary forms. Here, ATX users most often answered "yes" (95%), followed by UltraTax CS (94%), with CCH Axcess Tax and CCH ProSystem fx next at 88% and 89%, respectively. Twenty-six percent of ProSeries users answered "no" to this question, the highest percentage among major product users and nearly twice the percentage for all major products combined.

It is no secret that the price of professional-grade tax software is a sore spot with preparers, which shows up clearly when asked about in products' likes and dislikes. But a lack of affordability, or its perception, is not entirely uniform. Users of Drake were nearly three times more likely than average to pick price as a "like" at 33%, the highest percentage of likes for any feature of any major product.

Turning to top dislikes, price antipathy becomes more apparent; 29% of votes by users of all major products combined were for price as a top dissatisfaction (see the table "Top Dislikes," also below). Corresponding to its users' high percentage of likes for price, Drake got relatively few votes (2.7%) for price as a top dislike. Lacerte users, on the other hand, singled out price for their dissatisfaction at a rate of 41% (slightly higher than last year's 37%), followed closely by CCH ProSystem fx (40%). UltraTax CS users also faulted its price nearly 38% of the time. 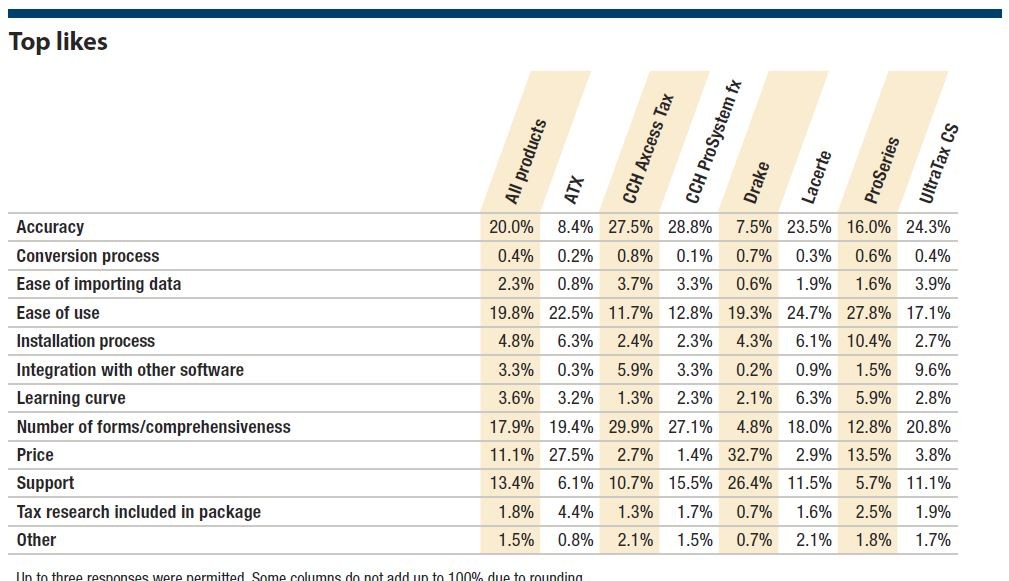 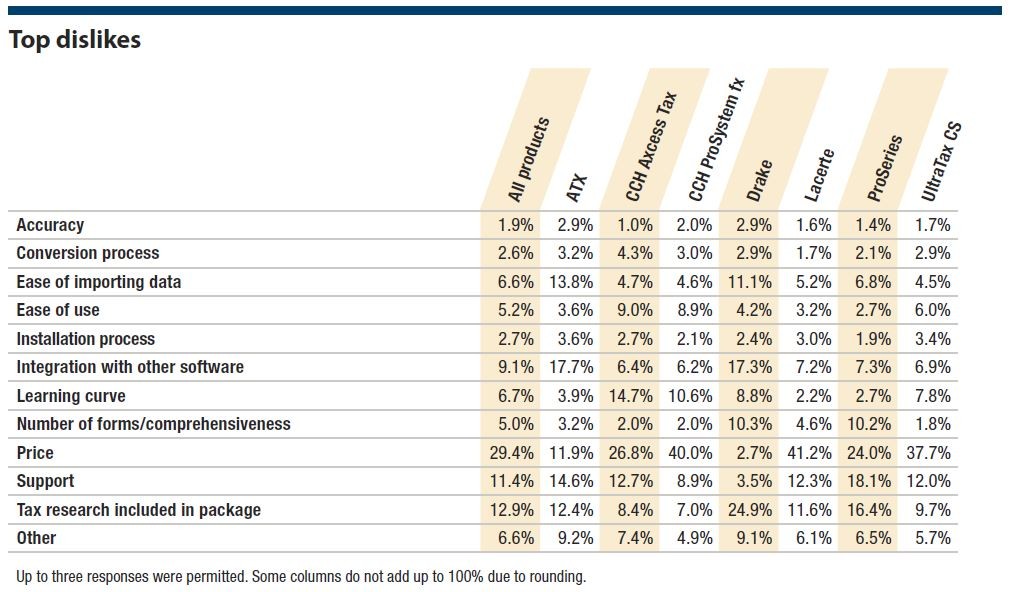 Drake users, however, found it wanting with regard to tax research as an integral feature, with nearly one-quarter of its demerits focusing there. Drake and ATX also were faulted for their integration with other software (17% and nearly 18%, respectively), bringing into sharper relief their slightly lower-than-average ratings in this regard in the table "Overall Ratings." CCH Axcess Tax was more likely than others to be thought to have a steep learning curve, with nearly 15% picking this as a top dislike, more than double the average for all major products. ProSeries was more often faulted for its support (18%) than others (11% average). Scanning the "other" responses to top dislikes reveals no widespread single problem; nearly 10% of the 431 write-in complaints involved state returns, but they faulted all major products in this respect more or less equally. A few respondents took the opportunity to reiterate their dislike of the product's price, e.g., "Price, Price, Price" and "Price ... again."

Understandably, with a system of this complexity, instruction and customer support play a major role in preparers' facility with their software, and in addition to support as a like and dislike, the survey delved more specifically into training and support. Seventy percent of users of major products did not receive training from their software provider during the season. Only 9.5% of ATX users said they were provided training. Of the 30% of respondents for all major products who did receive such training, the highest percentage was for CCH Axcess Tax (57%). Those respondents, however, did not rate the training as highly as others, 3.5 out of 5, compared with an average for all major products of 4.0.

Technical support was more widely availed of, with 81% of respondents saying they called (most often) or otherwise got in touch with a representative of their software to iron out problems (see the table "Technical Support," below). Ease of obtaining support, as well as the quality of that support, was most highly rated by Drake users (4.8 and 4.6 out of 5, respectively), with ProSeries and CCH Axcess Tax given below-average ratings of 3.3 and 3.7, respectively, for ease of obtaining support. Quality of support for both ProSeries and CCH Axcess Tax was rated below average at 3.7.

As in previous years, the telephone was by far the predominant medium for obtaining support. Oddly, after rising for several years, email and live electronic chat were reported as being used slightly less often in 2018 than in 2017. Also of note is that the percentage of respondents saying their software program resided on the vendor's server remained relatively low, 14%, with 86% installing it on their own drive or network, nearly identical to 2017. 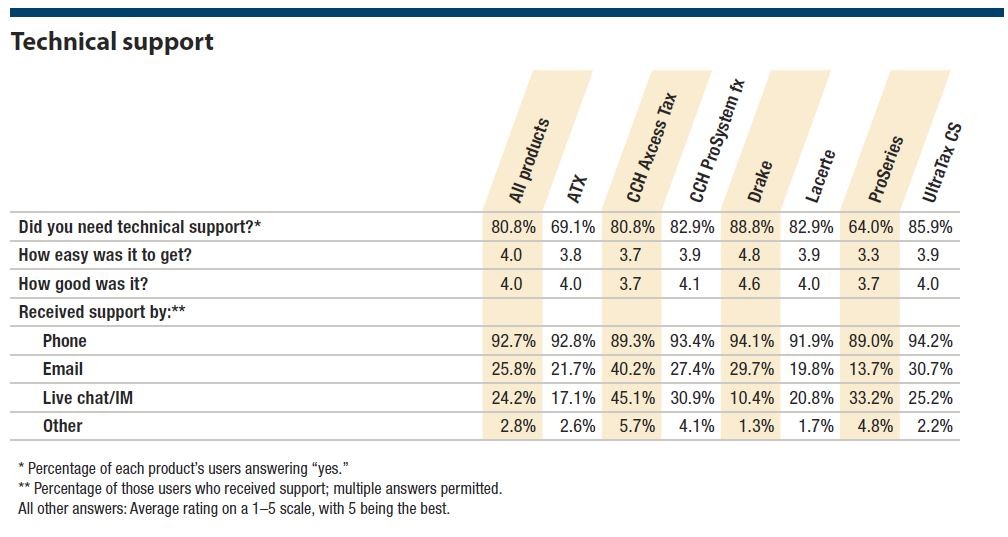 It should be interesting to see how tax preparation software will adapt to the TCJA's many new provisions, most of which begin with tax year 2018. (See the sidebar "TCJA Provisions Discussed With Clients," following this article, for a hint at the provisions CPA preparers think they are most likely to encounter.) CPAs therefore will likely have to navigate novel tax law terrain and new routes through it, in the form of revised and brand-new worksheets, checklists, and forms, all of which will no doubt figure in their tax software experience. 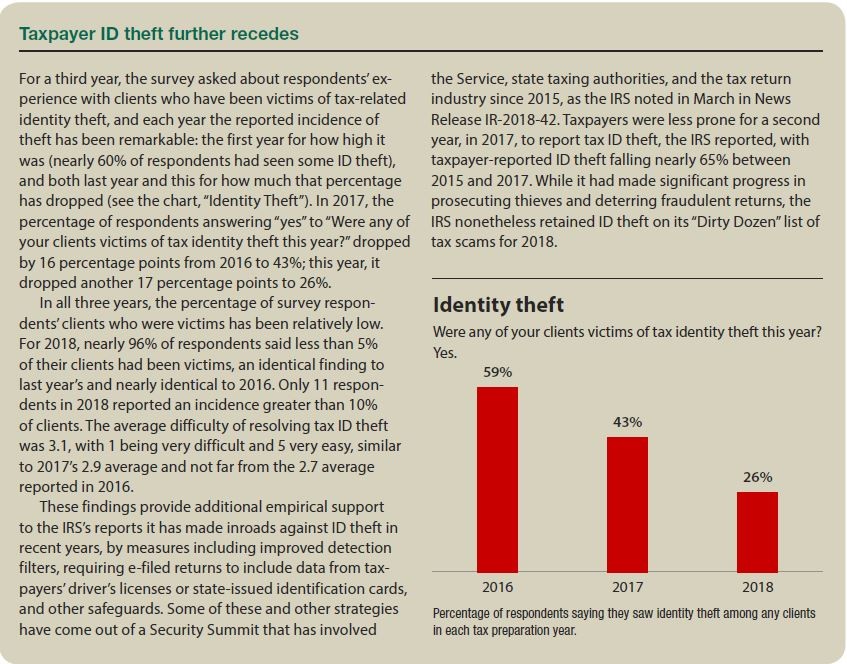 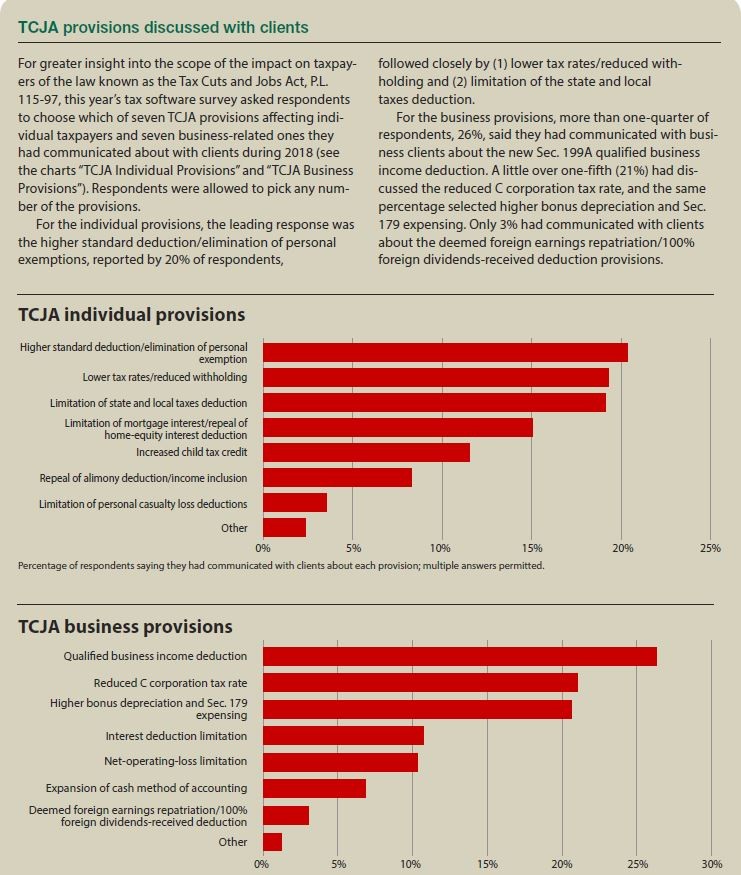