The receipt and redemption of rewards program points: Tax and reporting implications

The taxation of frequent flyer miles and other points taxpayers receive from rewards programs is a vexing problem, involving questions of timing, amount, and reporting of income. When a customer is awarded "points" that can be redeemed for merchandise, is the award itself a taxable event? Or must the points be redeemed first?

The IRS has provided little guidance, and while the Tax Court has considered the issue, its 2014 Shankar decision1 leaves more questions than answers about the tax treatment of rewards programs. The rewards program in Shankar was a points system, under which the points earned by a program participant could be accumulated and redeemed for airfare or rewards. This article draws attention to the income tax implications of rewards programs and the Foreign Account Tax Compliance Act (FATCA) reporting requirements that could arise if rewards are made to nonresident aliens.

For several years after the release of Announcement 2002-18, a stealth effect ensued — the IRS did not pursue an enforcement program, and businesses did not issue information returns to customers who received points or other promotional benefits in rewards programs. However, for tax year 2009, Citibank started issuing Forms 1099 to various customers. One customer, Parimal Shankar, received a Form 1099-MISC, Miscellaneous Income, reporting the fair market value (FMV) of an airline ticket he had purchased by redeeming "thank you points" that Citibank issued as a reward for opening a bank account. Shankar did not include the $668 reported as miscellaneous income on his tax return. The Tax Court determined Citibank had appropriately issued the Form 1099-MISC and that the ticket's FMV was includible in Shankar's gross income.2 The court relied on the accession-to-wealth principle articulated in the Supreme Court's opinion in Glenshaw Glass3 and found that the award was similar to interest4 given in exchange for the use (deposit) of Shankar's money.

Although Citibank issued Shankar a Form 1099-MISC, given the court's interpretation that the award was "interest" because it was a premium for opening a bank account, it seems a Form 1099-INT, Interest Income, would have been more appropriate. However, in 2009, Citibank also issued Form 1099-MISC to customers for frequent flyer miles awarded when the customers opened accounts.5 (The de minimis reporting requirements for Forms 1099-MISC and 1099-INT are $600 and $10, respectively.) To the extent interest is paid to a nonresident alien, the payer must file Form 1042-S, Foreign Person's U.S. Source Income Subject to Withholding.6

Also, since the court construed the award of the airline ticket as interest, the Shankar case may have implications for nonresident alien reporting requirements under Chapter 3 and FATCA under Chapter 4.8 Historically, nonresident alien reporting fulfilled the need to identify and tax U.S.-source income paid to nonresident aliens and was effective in the early 1980s.9 The payers of interest paid to residents of countries with which the United States has a tax convention or bilateral agreement under FATCA must report the interest paid to the extent required by Regs. Secs. 1.6049-4(b)(5) and 1.6049-8(a). As of this writing, the United States has entered into approximately 113 Intergovernmental Agreements (IGAs) requiring this information exchange. The IRS has determined an automatic exchange of information is appropriate for certain countries that have an agreement.10

Shankar establishes a precedent regarding the amount and timing of the taxable event for rewards programs: The redemption of the points for a reward is a taxable event. In the case of a noncash reward, the amount the taxpayer must include in income is the FMV of the reward, and that amount should be reported in the tax year the redemption occurs. In Shankar, although the treatment of the thank you points redemption was addressed, neither the taxpayer nor the IRS addressed the treatment of the award of the thank you points, which could have been the taxable event. Because neither party raised this issue, the court specifically declined to address whether the award itself was a taxable event. Since the case did not reach the appellate level, it potentially leaves the door open for future litigation concerning the constructive-receipt and/or cash-equivalency doctrine.

Under the constructive-receipt-of-income doctrine, a cash-basis taxpayer is deemed to receive income and is subject to tax in the year the account is credited or the income is otherwise made available.11 The taxpayer must have the ability to draw upon the income, assuming an intent to withdraw notice is given. The taxpayer must also have control over the income. As Justice Oliver Wendell Holmes wrote in Corliss v. Bowers, "income that is subject to a man's unfettered command and that he is free to enjoy at his own option may be taxed to him as his income, whether he sees fit to enjoy it or not."12 Applying the constructive-receipt-of-income doctrine, an argument can be made that the taxable transaction in Shankar occurred on the day he opened the bank account and received the thank you points. If that is the case, then the issue is determining the cash value to assign to the thank you points received.

In Shankar, Citibank provided the FMV of the airline ticket purchased with the thank you points and treated it as income to the taxpayer. Under Regs. Sec. 1.446-1(c)(1)(i), taxpayers must report any income from a taxable transaction even if a cash equivalent instead of cash is received. However, if the taxable event actually occurs when the thank you points are deposited (at constructive receipt), then the cash equivalent will need to be established at that time. Determining the value of the rewards points is an extremely subjective process, and the IRS has not issued any guidance on how the rewards points should be valued for this purpose.

How to treat points 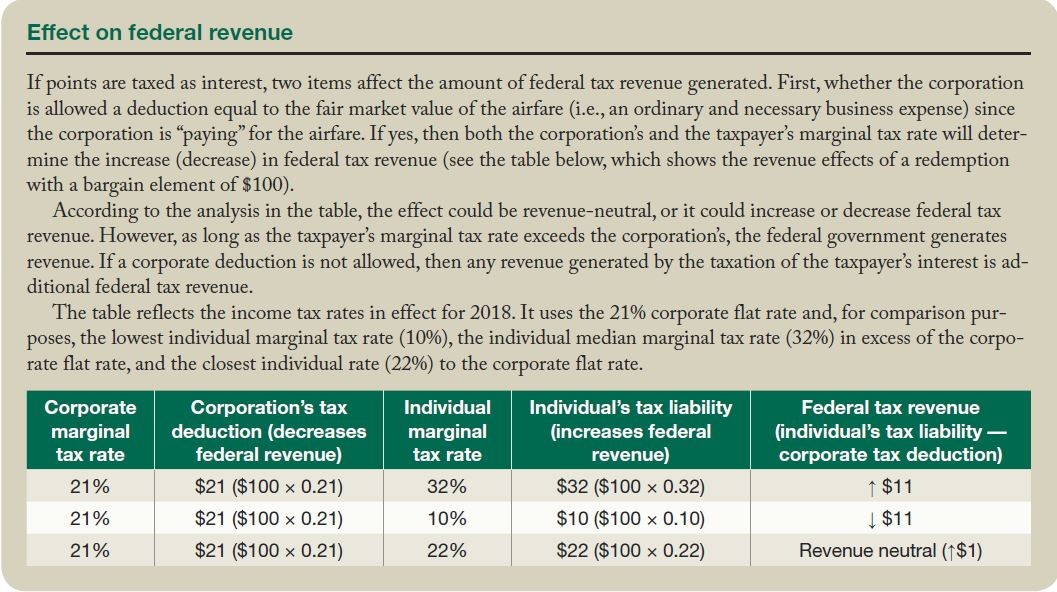 In a rewards program scenario, the taxpayer's exercise price would be zero. The taxpayer would simply communicate the choice to redeem the points for a reward (in Shankar, airfare) and then be taxed as if receiving ordinary income. The income amount would equal the airfare's FMV, which should be ascertainable. If the taxpayer chooses not to use the points, it would be equivalent to the lapse of a nonqualified stock option, which has no tax effect.

Since corporations are already subject to information-return reporting, the appropriate labor and mechanisms to report rewards points redemption transactions should be in place. The additional cost would relate to isolating these transactions for reporting purposes. These reporting costs (e.g., labor and tax form printing) would be deductible in addition to the net cost of the reward provided (i.e., the "bargain element") as an ordinary and necessary business expense deduction. Ultimately, the corporation will be receiving additional tax deductions beyond what it otherwise would. This reduces the corporation's taxable income base and related tax liability.

T.D. 9584 (the regulation interpreting FATCA) requires reporting interest paid to nonresident aliens in an effort to combat offshore tax evasion. Via information exchange, foreign countries are informed if their citizens who reside in the United States receive U.S.-source income. Similarly, the United States is able to tax the nonresident aliens' interest income.13 Further, U.S.-source interest income is subject to a 30% (backup) withholding tax if the payer (financial institution) does not have either a valid Form W-8BEN, Certificate of Foreign Status of Beneficial Owner for United States Tax Withholding and Reporting (Individuals), or Form W-9, Request for Taxpayer Identification Number and Certification.14

Corporations should comply with the required information reporting; otherwise, there is a potential implementation hurdle, unless the 30% withholding comes from the taxpayer's deposited bank funds. As previously mentioned, the corporation is responsible for issuing an information return Form 1042-S to account holders who are nonresident aliens.15 The corporation is also responsible for filing the related Form 1042, Annual Withholding Tax Return for U.S. Source Income of Foreign Persons, even if backup withholding does not apply.

A failure to file the applicable FATCA information exchange return constitutes a violation of the FATCA requirements by the corporation, which can result in a penalty of $270 per information return up to a maximum of $3,275,500 for Form 1042-S.16

If the decision in Shankar is universally followed, companies that are not reporting the redemption of points for awards in rewards programs (other than frequent flyer programs) by issuing either Form 1099-MISC or Form 1099-INT are violating information-reporting requirements.The court's interpretation that the award represented "interest" suggests that nonreporting could violate FATCA if a nonresident alien is awarded points for opening a bank account, since U.S.-source interest paid to nonresident aliens is reportable in FATCA's information exchange program. Similarly, corporations making such awards have the responsibility to complete both Form 1042 and issue the information returns on Form 1042-S.

9Regs. Sec. 1.6049-4. Chapter 3 of the Code, Sec. 1441 is the withholding provision that originally would have applied to these payments.