Taxpayers who want to maximize their cash flow should make payments at a rate no greater than required to avoid underpayment penalties. Using the various exceptions in the most tax-efficient manner helps meet this goal. In some cases, this involves using a combination of the allowable exceptions.

Note: Planning strategies that minimize the amount of estimated payments made throughout the tax year are generally done in anticipation of each required payment. However, these strategies may also help reduce or eliminate underpayment penalties in after-the-fact situations when a taxpayer faces the possibility of being assessed penalties. Also, when a taxpayer fails to meet any of the safe-harbor exceptions, the underpayment penalty is computed based on the least amount of tax that would have applied under the exceptions.

A taxpayer is not required to use the same safe-harbor exception for each quarterly payment. Instead, a taxpayer can use whichever exception produces the smallest required installment for that quarter (Secs. 6654(d)(1)(B) and (d)(2)(A)). Thus, taxpayers can alternate between safe harbors and still avoid underpayment penalties. However, they must recapture (i.e., pay back) any savings from the prior periods the annualization method was used (Sec. 6654(d)(2)(A)(ii)). Therefore, any reduction in an estimated tax payment resulting from the use of the annualization method must be added to the next estimated payment (if any) not based on annualization.

Example 1. Minimizing payments when taxpayer's income fluctuates during the tax year: F and C's 20X1 tax return showed an AGI of $220,000, income tax of $42,000, and self-employment (SE) tax of $6,000, for a total tax of $48,000. Most of their income comes from F's real estate sales, which are usually hard to predict both in terms of when sales will occur and how much income will be realized. All of their tax payments are made via quarterly estimated tax payments.

F and C anticipate that their 20X2 income will be much less than 20X1 because of some unusually large sales that occurred in 20X1. Therefore, their practitioner calculated their first two quarterly payments using the annualization method, which resulted in lower payments than using the exception based on prior-year tax. (Exception 1 results in required quarterly payments of $13,200 each ($48,000 × 110%) ÷ 4.) Payments of $5,000 and $7,500 were made for the first two quarters. In August 20X2, however, F realized a $300,000 gain from the sale of a property that he did not expect to occur until 20X3. How should F and C's third-quarter estimated payment be calculated?

If they continue to use the annualization method, assume the third-quarter payment will be $55,000 because the $300,000 gain was recognized in that quarter. To reduce the amount of the required installment, their practitioner should switch from the annualization method to Exception 1 (110% of the prior year's tax). This results in a third-quarter payment of $27,100 (($13,200 × 3 quarters) minus previous payments totaling $12,500). Exception 1 can also be used for the fourth-quarter payment. For 20X2, F and C's total tax liability ended up being $115,000. The table below summarizes how their 20X2 estimated payments were made, which keeps them safe from any estimated tax underpayment penalties.

Under the annualization method, the required installment is based on the tax liability determined as of the end of four periods — March, May, August, and December. For this purpose, the tax liability includes SE taxes, the 3.8% net investment income tax, the excess advance premium tax credit repayment, and employment taxes for household employees. Taxpayers using this method can defer the payment of estimated tax by carefully timing when a gain or other source of income is realized. For example, if a taxpayer expects to recognize a large gain from the sale of an investment in August, that gain must be considered in computing the third-quarter estimated payment. However, if the sale is closed in early September rather than August, the estimated tax associated with the gain would not be payable until the fourth installment.

Regardless of which safe-harbor method a taxpayer uses, underpayment penalties for the required fourth-quarter (i.e., Jan. 15) installment will not be assessed if the taxpayer files his or her return and pays his or her tax in full no later than Jan. 31 of the following tax year (Sec. 6654(h)).

Note: Taxpayers are not subject to underpayment penalties if they had no prior-year tax. However, there are a number of cases where a taxpayer incurs a tax, such as alternative minimum tax or self-employment tax, for a year even though a net operating loss (NOL) was generated. Thus, they may be required to make estimated tax payments in the subsequent year. Note, however, that for purposes of the annualization method, NOL carryovers are deducted from a taxpayer's income before that income is annualized (Rev. Rul. 67-93). This greatly increases the effect an NOL has on the computation of required installments under the annualization method. 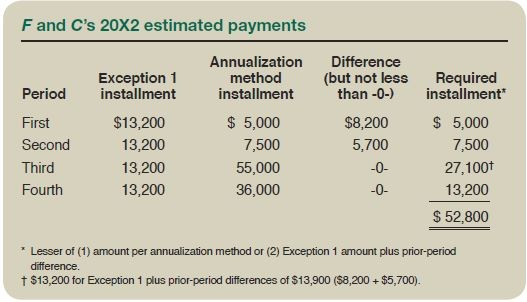 Taxpayers with interests in partnerships and S corporations, and beneficiaries of estates and trusts must consider their allocable share of income or loss from those entities when computing quarterly estimated payments. These amounts must be considered as follows:

Partnerships: A partner must include his distributive share of partnership income (Sec. 702(a)), any guaranteed payments (Sec. 707(c)), and any gains or losses on partnership distributions that are treated as gains or losses on sales of property as of each installment due date (Regs. Sec. 1.6654-2(d)(2)). In determining net earnings from self-employment, a partner considers his distributive share of the partnership's nonseparately stated income or loss and any guaranteed payments if the partnership is engaged in a trade or business. These items are included to the extent that they are attributable to months in the partnership tax year that precede the month in which the installment is due (Regs. Sec. 1.6654-2(d)(2)).

When the income of a trust does not have to be distributed currently, amounts distributed during the first 65 days of one year that are treated as having been distributed on the last day of the previous year under the rule of Sec. 663(b) are not considered to have been distributed for purposes of this rule (Rev. Rul. 78-158).

Thus, partners and S shareholders must consider their allocable share of passthrough income or loss throughout the year, rather than including the entire amount as of the date of the entity's year end.

Income taxes withheld from wages are deemed to be paid evenly throughout the tax year, unless the taxpayer establishes the dates on which the amounts were actually withheld (Sec. 6654(g)). This rule allows taxpayers to reduce or avoid estimated tax underpayment penalties by using three different strategies:

Increase withholding at year end: Even though additional tax is withheld at year end, the tax is deemed to be spread evenly throughout the tax year with an equal amount paid on each installment due date. This creates an opportunity for taxpayers who either find themselves underpaid or wish to defer the payment of tax to avoid the underpayment penalty by increasing withholding at year end (for example, 100% withholding on a year-end bonus).

Use the actual dates taxes were withheld: This can help those taxpayers whose withholding occurred only in the early part of the tax year. This may be particularly helpful to taxpayers who go from being employees to being self-employed during the tax year since they may not make quarterly estimated tax payments until later in the tax year (see Example 2).

Withhold from IRA distribution followed by qualifying rollover: Taxpayers who discover at the end of the year that they are underpaid may use proceeds from their IRA to reduce or avoid estimated tax underpayment penalties, provided they also have the cash funds available to redeposit the withdrawn IRA within the 60-day tax-free rollover period. A taxpayer may request a distribution and have up to 100% of it withheld for federal income taxes. Sec. 3405(f) provides that withholding on a designated distribution is treated as if it were wages with respect to which there has been withholding. Therefore, the withheld tax is deemed to be spread evenly throughout the tax year with an equal amount paid on each estimated tax installment due date.

Although the tax law prohibits borrowing against an IRA account, the IRS has privately ruled that an IRA distribution followed by a redeposit of the funds into the same (or different) IRA account within 60 days qualifies as a tax-free rollover transaction (IRS Letter Ruling 9010007). Furthermore, the transaction (1) is not a taxable distribution subject to the 10% premature distribution tax or any federal income tax withholding requirement; (2) is not a prohibited loan transaction under Sec. 4975; and (3) does not result in the 6% excess IRA contribution tax when the amount is redeposited (see Example 3).

To avoid underpayment penalties for the year, J should allocate his $20,000 of tax withholding to the period over which it was actually withheld. Otherwise, the $20,000 will be allocated $5,000 to each of the four quarters, which will likely make him underpaid for the first quarter.

Example 3. 100% withholding on IRA distribution to avoid an underpayment penalty: S discovers on Dec. 15 that she has underpaid her estimated tax by $10,000. She has $25,000 in an IRA and $10,000 cash available in the bank. Simply making the $10,000 estimated tax payment will still subject her to an underpayment penalty. Instead, she requests a $10,000 distribution from the IRA with 100% federal income tax withholding followed by a redeposit of the $10,000 into the same IRA 45 days later. The $10,000 withheld is treated as paid from wages in equal amounts on the due dates of each estimated tax installment due date.

Note: Under Sec. 3405(b), a nonperiodic distribution from an IRA is subject to a flat 10% withholding (if not electing to have no withholding). However, the instructions to line 3 of Form W-4P, Withholding Certificate for Pension or Annuity Payments, allow for an additional amount to be withheld from a nonperiodic payment.