Sec. 199A dividends paid by a RIC with interest in REITs and PTPs

On Feb. 8, 2019, the Treasury Department and the IRS issued an amendment to proposed Regs. Sec. 1.199A-3, providing rules that allow regulated investment companies (RICs) to pass through qualified real estate investment trust (REIT) dividends to their noncorporate shareholders and additionally soliciting comments on a similar tax treatment for income from qualified publicly traded partnerships (PTPs, or as they are commonly called, master limited partnerships). These regulations address the conduit treatment of qualified business income (QBI) for purposes of the 20% deduction, and the preamble to these proposed regulations addresses some of the complexities of QBI for RICs and their shareholders.

The law known as the Tax Cuts and Jobs Act of 2017 (TCJA), P.L. 115-97, reduced the top tax rate of domestic C corporations from 35% to a flat 21%. To provide a similar benefit to passthrough entities, Sec. 199A was enacted to allow noncorporate taxpayers a deduction of up to 20% of their combined QBI, commonly called the passthrough deduction. The deduction is applied at the individual level, not the entity level, and is based on the taxpayer's allocable share of QBI. Sec. 199A(b)(1)(B) includes the aggregate amount of qualified REIT dividends and qualified PTP income as eligible as QBI.

A RIC, as defined under Sec. 851, is the most common tax structure of mutual funds, closed-end funds, exchange-traded funds, and similar public funds. RICs are generally taxed as corporations but are allowed a dividends-paid deduction under Sec. 852(b)(2)(d) for dividends paid to their shareholders if they meet the requirements under Subchapter M. For an entity to qualify as a RIC, it must meet requirements related to its organizational structure, have at least 90% of its gross income from securities and certain other sources, and meet quarterly asset diversification requirements. To be taxed as a REIT for a tax year, the REIT must distribute at least 90% of its investment company taxable income and exempt interest income for the year.

The American Jobs Creation Act of 2004 (AJCA), P.L. 108-357, amended Sec. 851 to include "net income derived from an interest in a qualified publicly traded partnership" as qualifying income. The AJCA also added a limitation under the Sec. 851(b)(3) diversification tests that states a RIC may not invest more than 25% of its assets in qualified PTPs. The Ways and Means Committee report (H.R. Rep't No. 108-548, 108th Cong., 2d Sess. (2004)) for the AJCA indicates the reason for the 25% limit is to avoid possible tax advantages of tax-exempt and foreign persons using a RIC structure to hold PTP interests and avoid effectively connected income and unrelated business taxable income that might be generated if the investor invested in the PTP directly. Specifically, the committee report states:

When the TCJA was signed into law on Dec. 22, 2017, it was unclear if the Sec. 199A deduction would apply to RICs invested in REITs and PTPs. Through most of 2018, the investment industry was concerned that the 20% deduction would get trapped inside a RIC and shareholders would be unable to take advantage of it.

The IRS and Treasury requested comments in 2018 regarding allowing a shareholder in a RIC to take a Sec. 199A deduction for certain income of, or distributions from, the RIC. In December 2018, the Joint Committee on Taxation stated in its explanatory report (the Blue Book) that congressional intent was to treat an individual shareholder of a RIC that owns interests in REITs or PTPs as if the shareholder held the interest directly. Specifically, the Blue Book states:

Shortly after, in February 2019, Treasury issued proposed Regs. Sec. 1.199A-3, which provides further guidance on the conduit treatment for RICs invested in REITs. The proposed regulations currently do not allow for conduit treatment for qualified PTP income, but they do allow a RIC to compute and report Sec. 199A dividends from qualifying REIT income. Given the National Association of REITs' estimate that approximately 40% of REIT shares are held through RICs, these proposed regulations have broad applicability.

The preamble to the proposed regulations explains that a RIC would calculate Sec. 199A dividends based on the general RIC rules, where income or gain of a shareholder of a RIC is treated as if the shareholder had realized the income or gain directly, resulting in the RIC's reporting of capital gain dividends under Sec. 852(b)(3) and exempt interest dividends under Sec. 852(b)(5) to its shareholder. Prop. Regs. Sec. 1.199A-3(d)(3)(v) defines the amount of the RIC's qualified REIT dividends for the tax year over the amount of the RIC's deductions allocable to that REIT income. Prop. Regs. Sec. 1.199A-3(d)(4)(i) provides that shareholders would then treat the income reported as Sec. 199A(e)(3) qualified REIT dividends.

Prop. Regs. Sec. 1.199A-3(d)(4)(ii) requires investors in a RIC to hold shares in the RIC more than 45 days during the 91-day period beginning 45 days before the ex-dividend date, taking into account the principles under the dividends-received deduction rules of Secs. 246(c)(3) and (4). 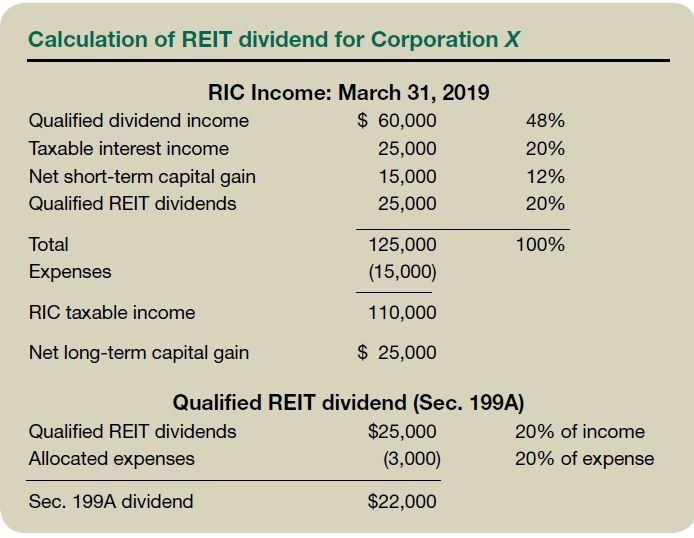 Considerations for conduit treatment for RICs with qualified PTP income

Income from certain service businesses, such as the income from specified service trades or businesses (SSTBs) under Sec. 199A, is generally not qualified income for PTPs as set forth in Sec. 7704(d). Accordingly, the amount of SSTB income generated by a PTP would generally be de minimis. Despite this, many of the issues in the preamble related to the concern that SSTB complexities would prevent the desired simplicity of RIC shareholder taxation. Taxpayers receiving an allocation of income from an SSTB are only eligible for a deduction under Sec. 199A if the taxpayer's taxable income before the Sec. 199A deduction is below the threshold amounts. For 2019, the Sec. 199A 20% deduction for income from SSTBs begins to phase out at $321,400 of taxable income for married-filing-jointly taxpayers ($160,700 for single and head-of-household filers; $160,725 for married filing separately) and fully phases out at $421,400 of taxable income ($210,700 for single and head-of-household filers; $210,725 for married filing separately) under Sec. 199A(d)(3).

Specifically, SSTB rules may create a unique situation where, depending on income levels, the income from a PTP may be eligible for the Sec. 199A deduction for one shareholder but not eligible for deduction by another. Treasury and the IRS believe there is no precedent for providing conduit treatment for a RIC in this manner and that it would necessitate more complex tax reporting for RIC shareholders.

A second SSTB concern listed in the preamble addresses the treatment of SSTB losses for purposes of Sec. 199A. PTPs are required to calculate and report separately income and deductions from SSTBs and non-SSTBs to their partners because PTPs cannot net losses from SSTBs with income from non-SSTBs. Additionally, if a taxpayer has a net loss from an SSTB or a non-SSTB that is allowed in determining taxable income for the year, that loss may be required to be carried over to future years to comply with Sec. 199A. It is unclear how any losses could be passed to the RIC shareholder because RICs are generally taxed as corporations, with shareholders receiving income from dividends but not allocated losses.

Finally, and outside of SSTB considerations, Treasury and the IRS have expressed concerns regarding the corporate "blocker" status of RICs. Generally, RICs serve as blockers to effectively connected income (ECI) for non-U.S. RIC shareholders and unrelated business taxable income (UBTI) for tax-exempt RIC shareholders. Sec. 199A(c)(3)(A)(i) requires that QBI is effectively connected with a U.S. trade or business for a taxpayer to be eligible for the 20% deduction. In particular, the concern is that the conduit treatment of qualified PTP income would negate the blocker treatment of the RIC structure, despite the statements in the Committee Report to the AJCA that addressed the issue by limiting a RIC's investments in qualified PTPs to 25% of the RIC's assets.

Due to these complexities, the IRS and Treasury have requested recommendations on the following items:

As of this writing, several comment letters had been submitted that addressed many of these issues.

The proposed regulations provided much-anticipated rules for RICs with REIT income for purposes of Sec. 199A but reserved the right to issue further guidance on RICs with PTP income. It also provided shareholders of funds investing in REITs the ability to use the Sec. 199A deduction related to their qualified REIT dividend income by issuing such guidance just prior to the issuance of Forms 1099-DIV to investors. The proposed regulations currently do not extend the same benefit to shareholders of RICs investing in PTPs, pending resolution as to how this may be done in a relatively simple but effective manner, to allow RIC shareholders to be treated in the same manner as if they had directly invested in these PTPs.