This item illustrates the tax consequences and the shareholders' cash flow resulting from the liquidation of an S corporation that is not subject to the built-in gains (BIG) tax.

Example. Liquidating an S corporation that is not subject to the BIG tax: T Inc. has operated as a calendar-year S corporation for 12 years. The corporation has 15 shareholders, all of whom are unrelated individuals. As of the beginning of its current tax year, T has assets and liabilities as shown in the table, "T's Assets and Liabilities" (below). 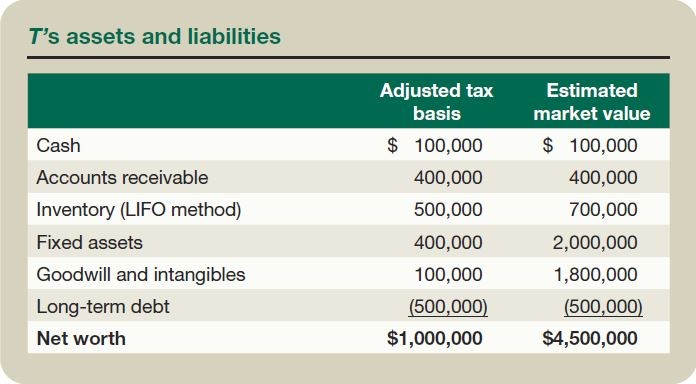 Assume in this example that either T operated as a C corporation before its S election or that shares of its stock changed hands among shareholders in the past at a loss, resulting in a lower stock basis in the hands of the current shareholders. Also assume that each of the 15 shareholders is considered a high-income taxpayer for purposes of Secs. 1(h) and 1411 and that any ordinary income from the transaction will be taxed at a 37% marginal rate (the highest individual tax rate). Therefore, the shareholders are subject to the 20% maximum tax rate for qualifying dividends and capital gains, and these amounts may be subject to the 3.8% net investment income tax (whether the surtax applies depends on each shareholder's unique tax circumstances).

The corporation has received an unexpected offer to sell its inventory for $700,000, its fixed assets for $2.5 million, and the intangibles for $1.8 million, for a total sales price of $5 million. If the corporation accepts the offer, it would retain its cash and collect its receivables, retire its debt, and liquidate shortly after the sale. The corporation's net income from operations from Jan. 1 to the date of the sale is projected to be $500,000, and the depreciation recapture from the proposed sale would be $800,000.

Avoiding the risk of double taxation

Under the passthrough concept for S corporations, double taxation normally does not occur.

If a gain is triggered at the corporate level by a sale of assets, the shareholders have a passthrough of the gain and a corresponding increase in their bases in the S corporation stock (Sec. 1367(a)(1)). When the sale proceeds are then distributed in liquidation, the shareholders' increased bases prevent double taxation.

A similar result occurs if an S corporation makes a distribution of property with respect to its stock. If the property's fair market value (FMV) exceeds the adjusted tax basis of the property in the hands of the corporation, gain is recognized by the S corporation as if it had sold the assets to the distributee at FMV (Sec. 336(a), applicable to S corporations via Sec. 1371(a)). The gain flows through to the shareholders, increasing their stock bases, thereby preventing double taxation on the distribution.