An overlooked impact of the 2017 tax reform act has resulted in many simple trusts' having a tax liability on ordinary income, which was rarely the case prior to the act.

A simple trust, by the terms of its trust agreement, is required to distribute all of its income currently, cannot make charitable contributions, and does not distribute principal (Regs. Sec. 1.651(a)-1). Because any capital gains (or losses) reported on the fiduciary income tax return (Form 1041, U.S. Income Tax Return for Estates and Trusts) are taxed at the trust level as part of the principal of the trust, before the enactment of the law known as the Tax Cuts and Jobs Act (TCJA), P.L. 115-97, trust income tax preparers were able to quickly verify if a return was prepared properly, using a shortcut of comparing taxable income against the net capital gains minus the trust's $300 exemption. Changes brought about by the TCJA render this shortcut method null and void, and the common wisdom that simple trusts will not owe tax on ordinary income (such as dividends and interest) is not necessarily true any longer.

The heart of this issue lies in TCJA modifications to Sec. 67 eliminating (for tax years 2018 through 2025) deductibility of miscellaneous itemized deductions subject to the floor of 2% of adjusted gross income (AGI).

For trusts, this includes investment advisory fees that would be commonly or customarily incurred by a hypothetical individual holding the same property. Post-TCJA, expenses that are miscellaneous itemized deductions are taken into account in computing trust accounting income (TAI) but are now nondeductible in computing taxable income and distributable net income (DNI) for the trust. The purposes of TAI and DNI differ from one another.

In contrast, under Regs. Sec. 1.643(a)-0, DNI's only application is the income taxation of estates and trusts and their beneficiaries. DNI is the amount of income for the year that, if distributed, is taxable to the beneficiary. DNI is the limit of the deduction allowable to the trust for the distributions to a beneficiary. Therefore, DNI acts as the upper limit (or ceiling) for which the trust can claim a deduction for distributions of income to a beneficiary. Traditionally, DNI (the limit on distributions) has been lower than TAI (the minimum amount deemed to be distributed) because many expenses were fully deductible in computing DNI.

However, the disallowance of 2% itemized deductions in calculating DNI post-TCJA creates the possibility that DNI will now be greater than TAI, or, said the other way, the deemed distribution from the trust will be less than DNI. If both TAI and actual distributions are less than DNI, this means not all of the trust's taxable income is distributed to beneficiaries, resulting in ordinary income being taxed at the trust level (in addition to any capital gains).

The notice did not make any pronouncements on the deductibility by a beneficiary of excess deductions on termination of a trust or estate that, by operation of Sec. 642(h) and underlying regulations, is claimed as a miscellaneous itemized deduction on Schedule A. In response, the AICPA submitted a letter to the IRS and Treasury on Oct. 31, 2018, proposing that Sec. 67(e)(1) items included in excess deductions be allowable as "above the line deductions," with any remaining items allowable as an itemized deduction.

Regs. Sec. 1.67-4 clarifies which costs are paid or incurred in connection with trust administration, which is particularly helpful for determining if an expense will potentially cause a discrepancy between DNI and TAI during the preparation of a simple trust's return.

The starting point in these determinations is Regs. Sec. 1.67-4(b)(1), which defines the phrase "commonly and customarily incurred" to determine whether the expense would be hypothetically incurred by an individual. The product or service provided is considered, rather than the description of its cost. For example, legal fees to defend a court case involving title to a trust asset could be incurred by an individual and therefore would not be deductible by an estate or trust. However, legal fees incurred in the decanting of a trust would be a trust-specific expense and would be allowed as a deduction for income tax purposes.

Ownership costs are costs that are chargeable to or incurred by an owner of property simply by being the owner of that property and are described in Regs. Sec. 1.67-4(b)(2). These types of costs could be commonly or customarily incurred by individuals and are therefore not specific to an estate or trust. As a result, a deduction for these costs is disallowed for an estate or trust owning nonrental property. Examples of these costs of ownership are repairs and maintenance expenses, condo fees, and insurance costs, among others.

Costs relating to the preparation of all estate and generation-skipping transfer tax (GSTT) returns, fiduciary income tax returns, and the decedent's final individual income tax return are not subject to the 2% floor and therefore would be deductible, according to Regs. Sec. 1.67-4(b)(3). However, the fee for preparing a decedent's gift tax return is not a tax-deductible expense.

One of the more common expenses deductible for TAI purposes that is disallowed for income tax (and thus DNI purposes) is investment advisory fees to the extent that they are commonly or customarily incurred by a hypothetical individual investor, as provided in Regs. Sec. 1.67-4(b)(4). Two exceptions to this are if the costs incurred by the trust exceed those that would be charged to an individual solely because either (1) the investment services were provided specifically to a trust, or (2) the costs were attributable to an unusual investment objective or the need for a specialized balancing of the interests of various parties, for which a reasonable comparison with individual investors would not be proper. In these circumstances the additional costs would be deductible, as they would not be incurred by an individual.

Appraisal fees incurred to determine the fair market value of assets for a decedent's estate or a trust, to determine value for the purpose of making distributions of property to beneficiaries, or to properly prepare the trust's income tax return would be deductible for income tax purposes, as they are not costs that are commonly or customarily incurred by an individual.

Regs. Sec. 1.67-4(b)(6) discusses certain other fiduciary expenses that are not commonly or customarily incurred by individuals and are therefore deductible for fiduciary income tax purposes:

While preparing an income tax return for a trust that paid a single fee, commission, or other expense (such as a fiduciary fee, attorney fee, or accounting fees) that includes both costs that are subject to the 2% floor and those that are not subject to it, the combined fee must be unbundled and the costs allocated accordingly. Regs. Sec. 1.67-4(c)(4) indicates that any reasonable method may be used to allocate the costs and discusses criteria for a reasonable method. 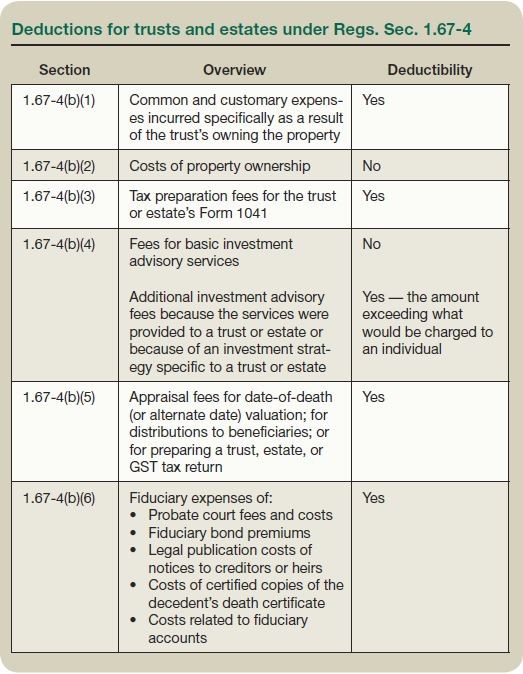 The deductibility of expenses when computing TAI is harder to analyze, as it is defined by applicable local law and the trust agreement. The rules regarding calculating TAI are not in the Code but instead are generally found in the Uniform Principal and Income Act (UPAIA), which was originally issued in 1997 and was amended in 2000. Most states have adopted the UPAIA, but most states have made modifications, which vary by state. When preparing a simple trust's return, the preparer must be aware of which state law applies. 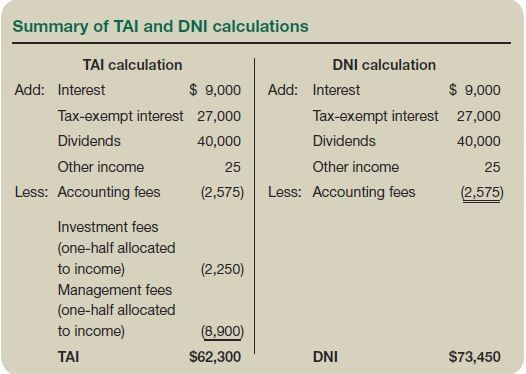 As illustrated in the table "Summary of TAI and DNI Calculations," below, TAI is less than DNI because DNI no longer allows the (2% itemized) deductions for investment and management fees. For income tax purposes, this results in less income being distributed to the beneficiary and income tax being due at the trust level because the reduced distributions are not enough to distribute all of the ordinary income to the beneficiary. 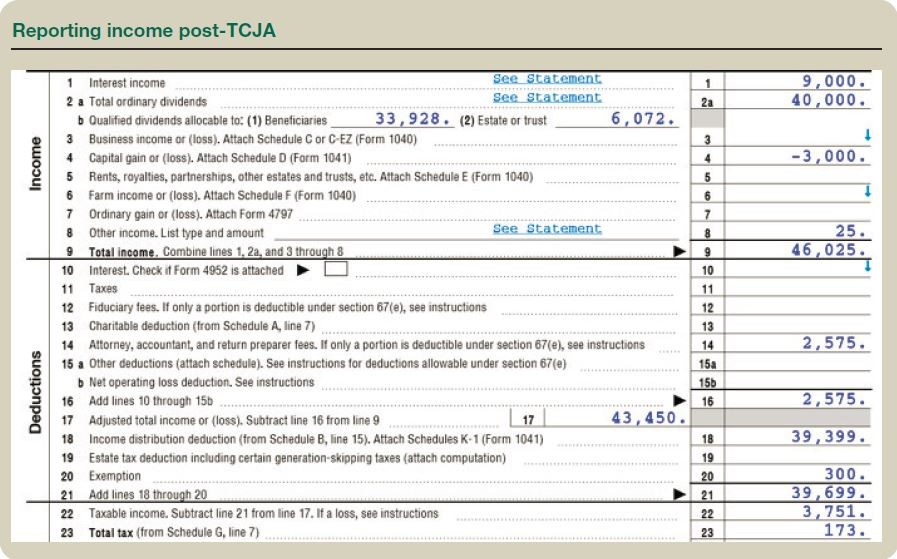 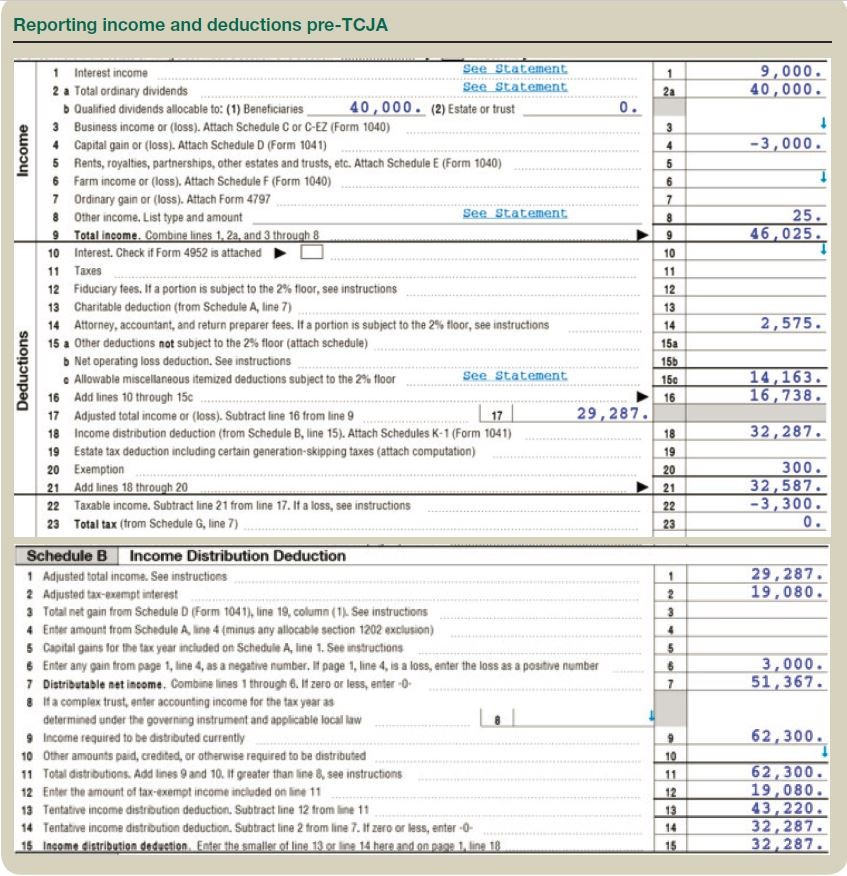 Page 1 of the post-TCJA income tax return shows the items of taxable income. However, under the TCJA, the only deduction is for accounting fees (on line 14). The expenses for investment fees and management fees are not reflected because they are no longer deductible for income tax purposes.

The income distribution deduction is reported on line 18 of page 1. Total deductions of $42,274 (including the $300 exemption on line 20) are not sufficient to distribute all of the ordinary income of $49,025. Taxable income for the simple trust is $3,751 (line 22) and results in $173 of tax due (line 23) at the trust level under the TCJA, even though this is a simple trust that is required to pay out all of its income.

This is contrasted with the pre-TCJA treatment as shown in the 2017 Form 1041 in "Reporting Income and Deductions Pre-TCJA." The investment and management fees are reflected on line 15c since they were previously tax-deductible.

This comparison of 2017 treatment versus 2018 TCJA treatment of itemized deductions is a simple yet effective means to illustrate the implications of the disallowance of 2% itemized deductions for trusts and estates, particularly for a simple trust, for 2018 through 2025. Previously, preparers of returns for simple trusts were able to quickly and confidently review the return's preparation by comparing taxable income against the sum of capital gains minus the trust's $300 exemption. However, the TCJA makes the preparation of simple trusts' returns less simple.

Howard Wagner, CPA, is a partner with Crowe LLP in Louisville, Ky.

For additional information about these items, contact Mr. Wagner at 502-420-4567 or howard.wagner@crowe.com.

Unless otherwise noted, contributors are members of or associated with Crowe LLP.