The Internal Revenue Code contains several provisions that encourage investment in small businesses. These include certain advantages for investing in qualified small business stock (QSBS), as discussed below. But first, what is QSBS?

To qualify as QSBS, the stock must be:

3 Code sections that come into play

The amount considered under this exclusion is limited to the greater of $10 million or 10 times the taxpayer's basis in the stock. The amount of gain eligible for the full or partial exclusion is subject to these limits computed on a per-issuer basis. Special rules can also apply for businesses located within an empowerment zone. Note, however, that a 28% rate applies to gains that remain subject to tax after the 50% or 75% exclusions.

Sec. 1244. Losses on small business stock: The sale of stock at a loss usually generates a capital loss, which can be deducted in any year only to the extent of capital gains, plus $3,000 ($1,500 for married taxpayers who file separate returns). Fortunately, Congress recognized that investors in small corporations often run more of a risk of loss. As a result, the Code permits an individual to deduct, as an ordinary loss, a loss from the sale or exchange, or from worthlessness, of small business stock (more commonly called Sec. 1244 stock) issued by a qualifying small business corporation. Unlike a capital loss, an ordinary loss may fully offset wage income, dividends, or similar ordinary income.

To prove that it is an active business rather than a quasi-holding company, the small business corporation must derive more than 50% of its aggregate receipts from noninvestment income. Investment income includes only gross receipts derived from royalties, rents, dividends, interest, annuities, and sales or exchanges of stock or securities.

There are limits, however, to the tax advantages of using Sec. 1244 stock. The maximum amount deductible as an ordinary loss in any one year is $50,000 ($100,000 on a joint return). Losses that exceed this limit are capital losses.

Sec. 1045. Rollover of gain from QSBS: If a taxpayer other than a corporation sells QSBS it has held for more than six months and elects to apply Sec. 1045, gain from that sale is recognized only to the extent that the amount realized exceeds (1) the cost of any QSBS purchased by the taxpayer during the 60-day period beginning on the date of the sale, reduced by (2) any portion of that cost previously taken into account under Sec. 1045.

The law known as the Tax Cuts and Jobs Act, P.L. 115-97, enacted in 2017, provides an opportunity to defer taxation of gains by making qualified investments in certain qualified properties or investments in a qualified opportunity zone. Although the designation is not necessarily targeted toward early-stage companies, it is not unusual for such businesses to be located in technology centers or incubators that have such designations. 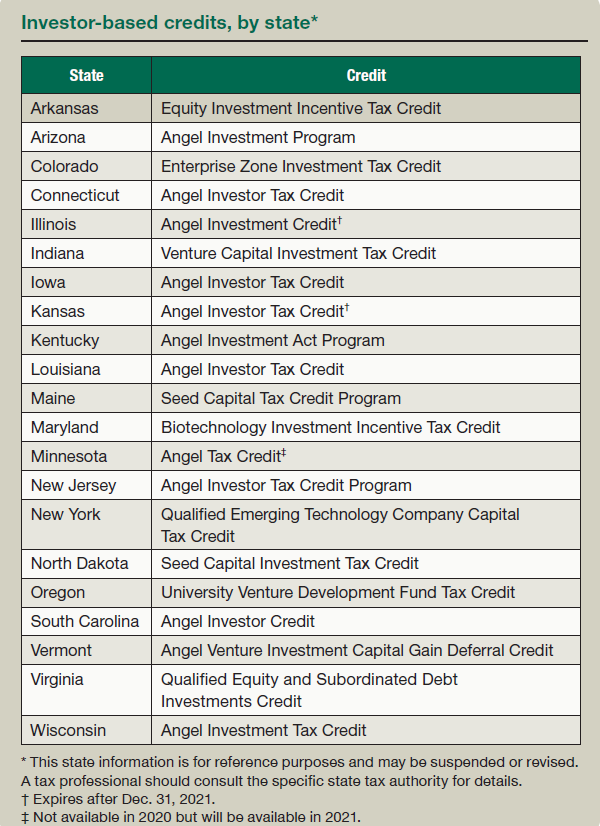 Additional information and guidelines may be found on the various state government websites. In the author's experience, investor-based state credits are often overlooked.

For additional information about these items, contact Ms. Lantz at 503-620-4489 or mlantz@aldrichadvisors.com.

Contributors are members of or associated with CPAmerica, Inc.