Why states should adopt the MTC model for federal partnership audits

As states have begun to address changes in the federal partnership audit rules, this column has considered the federal and state procedures for partnership audits at the federal level (see Jensen, Sherr, and Stanton, "Developing a Uniform State Approach to the New Federal Partnership Audit Regime," 48 The Tax Adviser 888 (December 2017), and the Multistate Tax Commission's (MTC's) Model Uniform Statute and Regulation for Reporting Adjustments to Federal Taxable Income and Federal Partnership Audit Adjustments (MTC model statute) (see Stanton and Sherr, "A Uniform State Approach to the New Federal Partnership Audit Regime,"The Tax Adviser 836 (December 2018). The MTC formally adopted the MTC model statute (available at www.mtc.gov in January 2019. This column covers federal and state developments in 2019, AICPA tax advocacy efforts, the helpful provisions of the MTC model statute and why states should adopt it, and what is expected to happen in 2020 in the states with partnership audit ­legislation and guidance.

Important changes in the federal income tax treatment of partnership audits began to apply for tax years beginning Jan. 1, 2018, for many partnerships (enacted as part of the Bipartisan Budget Act of 2015, P.L. 114-74). With extended 2018 partnership returns timely filed by Sept. 15, 2019, the IRS is expected to begin to conduct audits using the new partnership audit regime in 2020. In anticipation of increased partnership audit activity by the IRS, states are starting to react and enact (or at least consider) legislation regarding the new federal partnership audit process.

The IRS has issued the following guidance on the new partnership audit regime (see the AICPA webpage ­"Partnership Audit and Adjustment Rules," available at www.aicpa.org:

Treasury and the IRS are expected to issue more guidance by June 30, 2020, in these areas:

The AICPA submitted comments to Treasury and the IRS on the following matters:

The AICPA submitted the following comments to Congress:

In addition, the AICPA has participated in state partnership audit legislation presentations to state CPA societies and at the National Conference of State Legislatures Task Force on State and Local Taxation (NCSL SALT) meeting in November 2019. Also, over the past year, the following professional services associations have provided updates on the MTC model statute at conferences: the American Bar Association (ABA) State and Local Taxes Committee, the Energy Infrastructure Council (EIC) (formerly the Master Limited Partnership ­Association), and the National Association of State Bar Tax Sections.

Why states need to enact the MTC model statute in 2020

States incorporate the Internal Revenue Code (IRC) "tax base" into their tax laws in various ways. However, states' conformity to the IRC's assessment and refund laws varies widely, with most states adopting their own independent assessment and refund laws that are distinctly separate from those in the IRC. Therefore, almost every state that imposes an individual and/or corporate income tax needs to amend its federal adjustment reporting laws to account for the new federal partnership audit regime procedures for the process to work fairly, both for the state and for taxpayers who hold interests in impacted partnerships.

For example, the laws of many states do not allow for the direct assessment of partnerships, as these entities are not taxpayers upon which the state may assess, collect, or levy a tax. In other states, the partnership itself is the taxpayer; thus, the impact is less significant because individual assessment against a partner is not permitted, as the state may not subject its partners (e.g., individuals) to state income taxation on the income earned by a partnership. However, most states assess partners directly; therefore, many states will need to enact legislation that allows them to also assess the partnership, following the new federal regime. State tax authorities will need to issue guidance to explain how the states will implement any changes.

The MTC model statute provides states with a reasonable method to collect revenue for their share of liabilities flowing from an IRS audit of a partnership or multimember limited liability company (LLC) under the new federal partnership audit regime and not face substantial legal and administrative concerns.

The MTC model statute, approved by the MTC in January 2019, was developed and is supported by the "interested parties," which include the AICPA and several other organizations involved with state tax policy, including the Council On State Taxation (COST), the Tax Executives Institute, the ABA State and Local Taxes Committee, the Institute for Professionals in Taxation, and the EIC.

In addition, many CPAs and their clients are structured as partnerships and operate in many states and, thus, are directly subject to the new federal and state partnership audit regimes.

Until all affected states adopt the MTC model statute, CPAs and their clients could face complications and burdensome compliance challenges from the inconsistent requirements across states for reporting their federal audit adjustments to state tax authorities.

Overview of the many helpful provisions in the MTC model statute

With IRS audits under the new regime likely to start in 2020, states need to enact legislation conforming to the MTC model statute.

The map "States Impacted by the Federal Regime Change" (below) shows the state-by-state effect of the federal audit changes. 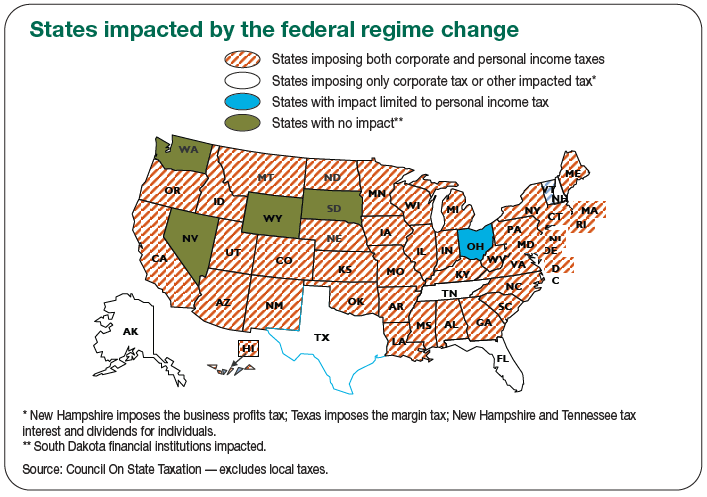 Map and status of state action 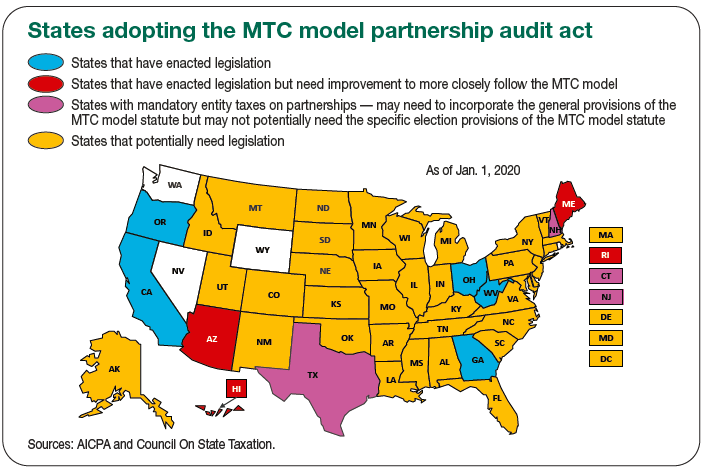 Some other states that enacted legislation generally following the MTC model statute are:

Based on reports from AICPA members, state CPA societies, and others, many states (Alabama, Delaware, ­Indiana, Louisiana, Kentucky, Maryland, Michigan, Minnesota, Missouri, New York, South Dakota, and Wisconsin) are likely to consider proposed state partnership audit legislation that will hopefully follow the MTC model statute. Many of the state CPA societies in these states are aware of and involved in the legislative process and have reached out to the AICPA as a resource. It is hoped that other states will consider adopting the MTC model statute in 2020 as well.

In addition, the four states that previously adopted their own partnership audit legislation (Arizona, Hawaii, Maine, and Rhode Island) may amend their statutes to more closely follow the MTC model statute.

The AICPA will continue to act as a resource and support state CPA societies as their states consider partnership audits legislation and implementing guidance.