Puerto Rico: A permanent tax deferral in a GILTI world?

In the past, U.S. businesses have sought to defer U.S. taxation of their earnings through supply chain and intellectual property (IP) migration planning with jurisdictions outside the United States. Considering recent U.S. tax reform changes, for example, lower federal income tax rates and preferential tax regimes such as the rules related to foreign-derived intangible income (FDII), thoughts have shifted toward keeping IP in the United States rather than following a more traditional IP migration route (such as, for instance, transferring IP to a tax-favorable European jurisdiction).

Those, however, that do not fall for the dangling carrot of enticing tax benefits in the United States must face a punishing stick in the form of global intangible low-taxed income (GILTI), which effectively ends the ability to defer the U.S. taxation of earnings of controlled foreign corporations (CFCs) in most situations (excluding a 10% carve-out for the CFC's qualified business asset investment and certain other limited exceptions). IP migration planning is further exacerbated by exit charges on outbound transfers of appreciated assets under Sec. 367 and ever-increasing substance requirements in the EU. However, for U.S. businesses (especially those in technology and life science industries), global IP often remains the most valuable revenue generator and, as such, the biggest trigger for corporate tax expense. With the immediate recognition of income tax on foreign earnings, what can businesses do to mitigate their tax burden?

Under the right set of circumstances, there may be a significant opportunity for tax savings in Puerto Rico.

The government of Puerto Rico sought to stimulate a struggling economy by encouraging immigration to the Caribbean island. On July 1, 2019, Puerto Rico enacted a new tax incentives law consolidating its tax incentives offering, which covers manufacturing, export services, and film production, among other activities (Act No. 60 of 2019, known as the Puerto Rico Incentives Code). Of particular interest for this discussion are tax incentives afforded to "individual resident investors" and to "export services" businesses.

Individual resident investor: Eligible persons can obtain a 100% tax exemption, lasting until the end of 2035, from Puerto Rican income taxes on dividends, interest, and capital gains accrued after becoming a bona fide resident of Puerto Rico. Gains generated from commodities, coins, and digital assets based on blockchain technology are eligible, among other asset categories. Certain conditions must be met to qualify, including, notably, a requirement to make annual contributions of at least $10,000 to not-for-profit organizations operating in Puerto Rico and acquisition of residential real property within two years of the start of incentives. Similar incentives were previously provided by Act No. 22 of 2012, known as the Act to Promote the Relocation of Investors to Puerto Rico.

Export services: The export services incentive includes a 4% tax rate, lasting until the end of 2035, on income from eligible export service activities. Service income from network, cloud computing, blockchain, subscription, or licensing, among other activities, is eligible. Dividends from eligible businesses are exempt from Puerto Rican income tax. To be eligible, a company must commit to having at least one employee when annual projected or actual volume of business is more than $3 million. Similar incentives were previously provided by Act No. 20 of 2012, as amended, known as the Export Services Act.

All these benefits are part of the aggressive economic incentive program to attract new business to Puerto Rico. Companies in technology and certain other industries with a significant IP component could enjoy an attractive combination of preferential tax regimes while, at the same time, employing a great workforce and benefiting from the U.S. legal system for IP protection.

While the benefits that can be obtained from Puerto Rico are great, they come with a price. For a U.S. business, migration could be a complicated process, including the relocation of individual owners as well as moving activities, employees, and significant functions to Puerto Rico, in addition to navigating the U.S. tax consequences of migration.

Impact from a US tax standpoint

The United States generally taxes U.S. citizens and permanent residents on their worldwide income regardless of their place of residence. This general worldwide income tax also applies to U.S. citizens and resident alien individuals who are bona fide residents of Puerto Rico (as defined under Regs. Sec. 1.937-1(b)). However, under Sec. 933, those individuals can generally exclude the Puerto Rican-source income from their U.S. individual income tax return when determining their U.S. income tax liability.

Sec. 937(b) and its regulations set forth the rules for determining whether income is considered to be from sources within Puerto Rico for purposes of the Code. Under these provisions, when determining whether income is sourced from Puerto Rico, or is effectively connected with the conduct of a trade or business within Puerto Rico, rules under Secs. 861-865 generally apply (with some modifications). Notably, dividend income would generally be considered Puerto Rican-source if paid by a Puerto Rican corporation from its Puerto Rican­-source income, subject to the rules in Regs. Sec. 1.937-2(g)(1)(ii). Certain capital gains are sourced to Puerto Rico if derived by Puerto Rican residents (albeit with limitations).

But what about GILTI and the Subpart F regime? To be subject to these anti-deferral regimes, a person must be a U.S. shareholder of a CFC. Broadly, a U.S. shareholder is defined to include U.S. persons who own directly, indirectly, or constructively 10% or more of the vote or value of the CFC. Interestingly, however, under Sec. 957(c)(1) a bona fide resident of Puerto Rico is not treated as a U.S. person (as defined in Sec. 7701(a)(30)) and thus is not subject to Subpart F and GILTI inclusions associated with ownership of stock in a Puerto Rican subsidiary (provided dividends received by that individual from that foreign subsidiary would be considered Puerto Rican­-source). Additionally, to qualify for a preferential 4% rate in Puerto Rico, the relevant income does not have to be derived via a Puerto Rican corporation. In fact, it could also be generated by a Puerto Rican branch or a transparent entity, allowing considerable flexibility from a planning standpoint.

And what about exit charges? Notably, for U.S. citizens relocating to Puerto Rico, Sec. 877A does not apply to impose an exit charge on the built-in gains, if any, inherent in the individual's assets. As such, a permanent exemption from U.S. income tax could be obtained on a significant income component (to the extent sourced to Puerto Rico) without the need to give up U.S. citizenship and face an exit charge under Sec. 877A. Importantly, Sec. 367(a)(1) imposes taxation on the outbound transfer of property by a U.S. person to a foreign corporation in a transaction that would otherwise qualify for nonrecognition treatment. Under Sec. 367(d), certain otherwise tax-free transfers of patents, know-how, copyrights, trademarks, franchises, licenses, and other similar IP create a taxable deemed royalty to the U.S. transferor. Most recently, the law known as the Tax Cuts and Jobs Act, P.L. 115-97, added goodwill, going concern value, and workforce in place to the list of IP items subject to deemed royalty treatment under Sec. 367(d), thereby further limiting the ability of U.S. taxpayers to move valuable IP offshore.

In traditional IP holding company structures, a significant exit charge could diminish or even outweigh the potential benefits of a migration. Additionally, the ability to obtain FDII rates (i.e., 13.125% for tax years beginning after Dec. 31, 2017, and before Jan. 1, 2026, and 16.406% for tax years beginning after Dec. 31, 2025) on export activities could make it less attractive to migrate. So how does Puerto Rico compare to other jurisdictions? Based on the table "Corporate Tax Rates Across Jurisdictions" (below), Puerto Rico stands out as a clear winner in a best-case scenario. 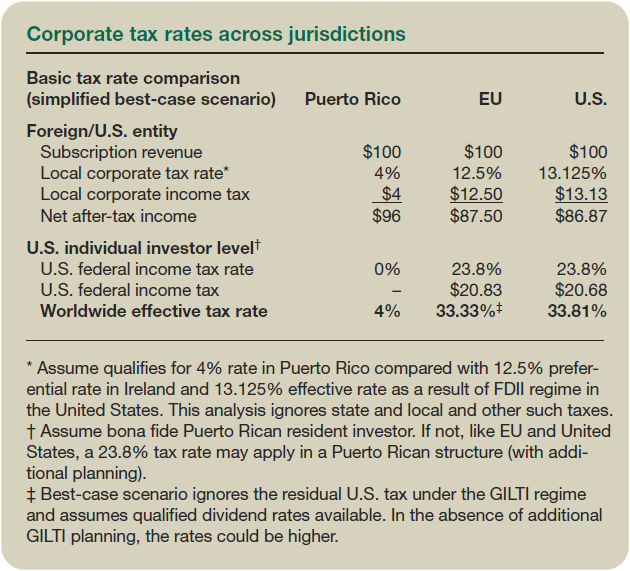 While dealing with exit charges and other challenges could be a significant hurdle, Puerto Rico could perhaps offer some entity choice solutions that are unique and not necessarily available in more traditional EU IP holding company structures. For example, under the right set of facts, a Puerto Rican business and associated assets could be held via a Puerto Rican branch rather than a Puerto Rican subsidiary corporation, thereby eliminating the exit charges under Sec. 367.

This strategy may be especially viable in a closely held context for U.S.-owned businesses structured as S corporations or partnerships. By establishing a Puerto Rican branch structure, those businesses could avoid the exit charges under Sec. 367 while still obtaining a preferential 4% tax rate in Puerto Rico on eligible income generated through the branch and a complete exemption from U.S. taxation on the same income under Sec. 933 in the hands of U.S. owners who also are bona fide residents of Puerto Rico.

As to the U.S. IP holding company structure, while obtaining the benefits of the FDII regime may incur fewer costs, it is important to highlight that the preferential FDII tax rate is only available for export activities income (i.e., income derived in connection with property sold to non-U.S. persons for foreign use, or services provided to any person, or with respect to property, not located within the United States). In contrast, in a Puerto Rican IP holding company structure, the preferential tax rates may be available for export activities to U.S., EU, and other customers located outside of Puerto Rico.

To implement a Puerto Rican structure, all facts and circumstances must be evaluated on a case-by-case basis. The ability to benefit in Puerto Rico and the United States rests heavily on the sourcing of income, meeting Puerto Rican eligibility requirements for the tax exemption decree, and U.S. eligibility requirements under Sec. 933, among other factors. It should also be noted that Puerto Rican residents are generally not eligible for international tax treaty benefits, and, therefore, additional planning may be required to mitigate the withholding tax exposures, if any. The implementation process may require certain business changes; however, for those taxpayers in the right position, a 4% tax rate on business operations that are also excluded from U.S. income tax (among various other benefits) could be a very significant reward. With the ever-changing tax landscape across the globe, now is the time to explore unique opportunities such as the permanent tax deferral that can be found in Puerto Rico.

For additional information about these items, contact Mr. Anderson at 202-644-5413 or kdanderson@bdo.com.

Unless otherwise noted, contributors are members of or associated with BDO USA LLP.