The Sec. 1061 capital interest exception and its impact on hedge funds

Under Sec. 705, a partner in a partnership maintains a single basis in the partnership interest, and allocations are made to the partner to a single Schedule K-1 (Form 1065), Partner's Share of Income, Deductions, Credits, etc. While Sec. 704(b) may require tracking of economic allocations, specifically by class, the Code does not otherwise require splitting and tracking a partner's single interest in a partnership. However, the final regulations under Sec. 1061 issued in January 2021 (T.D. 9945) may require this for certain partnerships.

Specifically, a hedge fund manager may be required to maintain this separate tracking of a single partnership interest into several buckets to avoid the negative tax consequences of the short-term capital gain treatment of assets held from one to three years under Sec. 1061 for certain partnerships on the economic return of their invested capital. This rule may even require a partner to re-create book and tax account tracking since the inception of a partnership and separate a single capital account into several components.

The law known as the Tax Cuts and Jobs Act (TCJA), P.L. 115-97, added Sec. 1061, which requires a taxpayer to use three years as the holding period for calculating favorable long-term capital gains associated with holding an applicable partnership interest (API) in connection with the performance of services. These carried-interest provisions apply only to the holdings of an applicable trade or business, which, under Sec. 1061(c), include the activities of raising or returning capital and either (1) investing in specified assets involved in raising or returning capital or (2) developing specified assets.

Under Sec. 1061(c)(3), a specified asset includes securities, commodities, real estate held for rental or investment, cash and cash equivalents, options and derivative contracts on these assets, and an interest in an underlying partnership to the extent of the partnership's interest in these specified assets. In simpler terms, Sec. 1061's application is generally limited to a profits interest in hedge funds, private-equity and venture-capital funds, real estate funds, or other investment partnerships to the extent of capital gains allocated to a partner for the performance of services. This profits interest allocation is more commonly referred to as a carried interest, incentive allocation, performance allocation, or sponsor "promote." Regs. Sec. 1.1061-4(b)(7) specifically excludes Sec. 1231 gains and losses, Sec. 1256 gains and losses, and qualified dividends from recharacterization under Sec. 1061.

The language in the proposed regulations under Sec. 1061 suggested that a capital interest under Sec. 1061(c)(4) would be respected only if the applicable rights within the partnership between the holder of the API and unrelated investors were similar. As such, this would have severely restricted the ability of hedge funds to meet this exception. However, the final regulations under Regs. Sec. 1.1061-3(c)(3) eased this restriction by allowing a capital interest to be respected if the partnership agreement reflects that a capital account is maintained in a reasonably similar manner to the allocations with respect to capital interests of significant unrelated nonservice partners, i.e., those holding 5% or more of the partnership's aggregate capital contributions.

However, where a holder of an API also has a capital interest, Regs. Sec. 1.1061-3(c)(3)(ii)(B) requires a clear identification via contemporaneous books and records of the partnership of the allocations being made to contributed capital that is separate and apart from allocations made with respect to the API. In addition, Regs. Sec. 1.1063-3(c)(3)(iii) describes that a reinvestment of API gain as the result of an actual distribution and reinvestment, or simply the retention of the API gain, will be treated as a capital interest for the purpose of these rules. API gains are defined under Regs. Sec. 1.1061-1 as any taxable gains allocated to the API holder with respect to the API. Regs. Sec. 1.061-3(c)(3)(vi) excludes API gains and losses and unrealized API gains and losses from the definition of a capital interest.

The requirement to maintain contemporaneous records to separate an API from a partner's capital interest under the final regulations creates a potential concern. The failure to maintain such records could cause the API holder's entire interest in the partnership, including allocations related to capital interests, to be subject to the reallocation under Sec. 1061.

These final regulations under Sec. 1061 are effective for tax years beginning on or after Jan. 19, 2021, but entities may apply them to a tax year beginning after Dec. 31, 2017, if they have consistently applied these provisions.

The impact of the capital maintenance of a hedge fund can best be described with an example. The chart "API Capital Maintenance Example" (below) shows the taxable income calculation of a hedge fund. Most hedge funds have historically maintained a single capital account for a general partner. However, the example shows the book and tax basis of five classifications of the equity of the general partner, or the holder of the API. In this example, the general partner has invested capital in the partnership and received a crystallized incentive allocation of $500,000 in the prior tax year. Only $100,000 of this incentive was previously taxable, with the remaining $400,000 being an allocation of the partnership's unrealized gains. 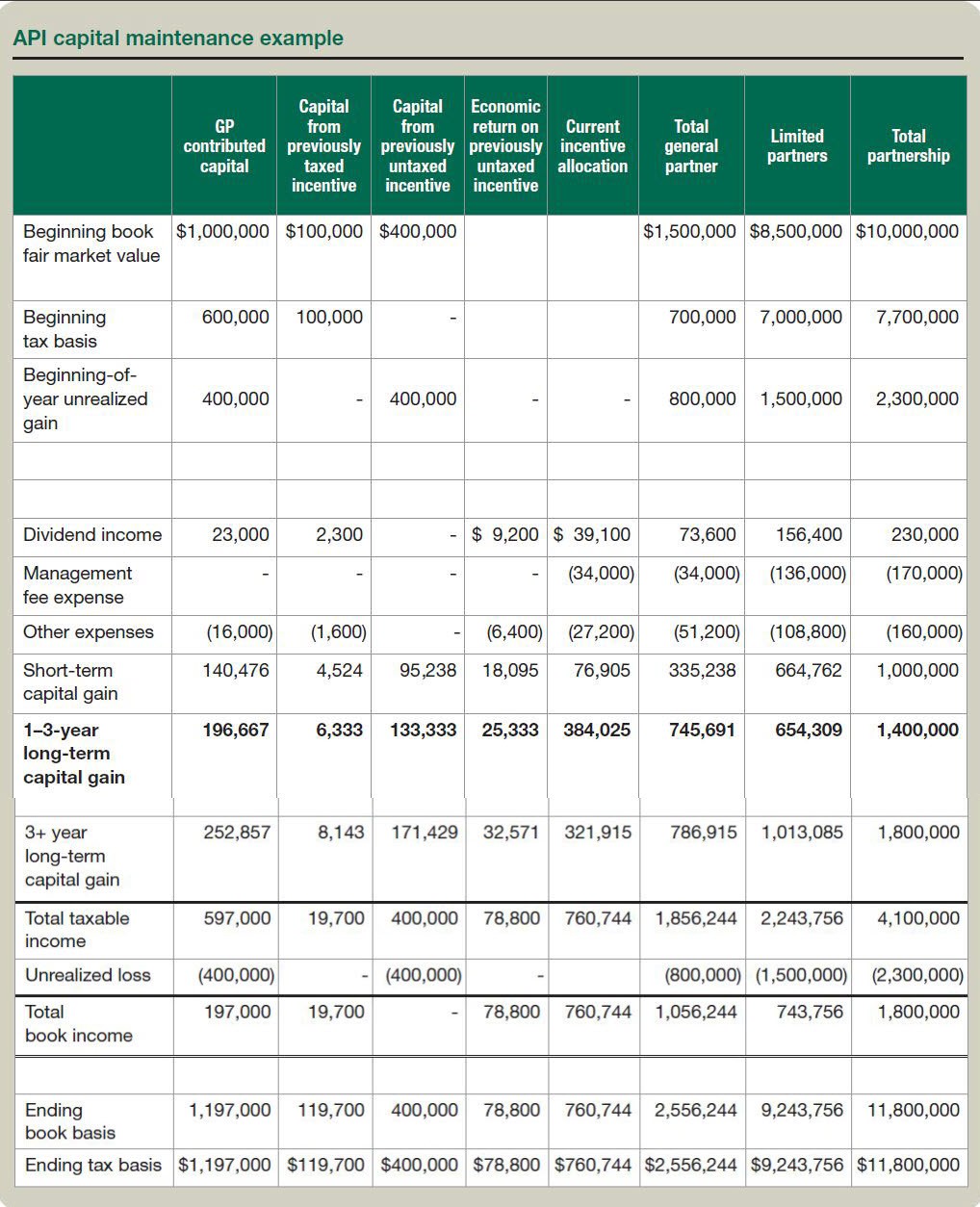 The partnership had positive economic returns in the current year, and the general partner received an additional incentive allocation of $760,744. The partnership sold all its investments and allocated realized gains under the special aggregation rules for securities partnerships under Regs. Sec. 1.704-3(e)(3), which allows tax gains to be allocated in aggregated, portfolio-level accounts. All holdings of the partnership are considered specified assets.

Additionally, the capital gains from one-to-three-year holdings related to the current-year incentive allocation of $384,025 would be subject to recharacterization under Sec. 1061. The capital from the previously taxed incentive would be considered a reinvestment from an API and treated as a capital interest along with the contributed capital. These amounts would not be treated as an API. The gains related to investment performance on contributed capital of the general partner would be treated as an API and subject to the recharacterization rules under Sec. 1061. The other two capital items, the unrealized API and the economic return on that unrealized API, have less certainty as to being subject to recharacterization.

The capital account maintenance requirements under the final Sec. 1061 regulations offer an opportunity to more appropriately classify the returns allocated to a holder of an API with the actual economics by maintaining significant historical detail on the holder's capital account. This recordkeeping is especially relevant to a hedge fund manager who may retain or "reinvest" the incentive allocation back into the fund. Without this level of recordkeeping, the default provision would be to treat the entire allocation of one-to-three-year capital gains as subject to the recharacterization requirements under Sec. 1061. Therefore, it is imperative that fund managers and their advisers be aware of these rules and maintain appropriate documentation.