The taxation of qualified regulated investment companies (RICs) and real estate investment trusts (REITs) both fall under the rules of Subchapter M of the Code. Also, the provisions of Subchapter C and basic corporate tax rules generally apply, with some notable exceptions. One notable exception is that a RIC or a REIT that meets the various tests under Subchapter M is allowed a dividends-paid deduction. In many instances, the dividends-paid deduction pushes out the character of the income determined at the corporate level to a corporation's shareholders. However, Sec. 199A, created by the law known as the Tax Cuts and Jobs Act (TCJA), P.L. 115-97, may create a potential difference in how the same type of income is taxed to shareholders of RICs and REITs and therefore offers an opportunity for fund managers. Sec. 199A allows taxpayers to deduct 20% of their qualified REIT dividends. While RICs can pass through qualified REIT dividends to their shareholders, investors may in some situations be able to benefit from investing in the same portfolio based solely on a different tax structure. Of particular interest may be a portfolio of mortgage-backed securities (MBSs) that would qualify for Subchapter M treatment under either the RIC or REIT rules.

Sec. 199A: The TCJA reduced the top tax rate of domestic C corporations from a maximum of 35% to a flat 21% rate. To provide a similar benefit to passthrough entities, Sec. 199A was enacted to allow noncorporate taxpayers to deduct 20% of their combined qualified business income (QBI), commonly known as the Sec. 199A passthrough deduction. The deduction applies for tax years 2018 through 2025, applies at the individual level rather than the entity level, and is based on the taxpayer's allocable share of Sec. 199A passthrough income.

RICs: RICs are domestic corporations that are registered under the Investment Company Act of 1940 and comply with various requirements to avoid paying federal income tax at the entity level. The reason a RIC can eliminate all or most of its income tax liability is due to Sec. 852(b)(2)(D), which allows a RIC to take a deduction for dividends paid to its shareholders. RICs exist to allow small investors to pool their capital and be able to benefit from economies of scale, diversification, professional money management, and other advantages that may otherwise only be available to large investors.

Among a number of qualification requirements under Sec. 851(b), a RIC must meet the following tests:

The definition of a "security" is important in the application of the 50% test. Sec. 851 refers to the definition of securities under the Investment Company Act of 1940. Among other items, the SEC staff has indicated in SEC no-action letters and other guidance that mortgage-backed notes and similar instruments are considered securities for SEC purposes. Furthermore, IRS General Counsel Memorandum (GCM) 39551 discusses whether mortgage-backed certificates are securities for purposes of the wash-sale rules under Sec. 1091 and provides general guidance on how to determine whether a financial instrument is a security.

The GCM advises that various sections of the Code define the terms "security" or "securities." Those definitions are not identical, but certain markers pertain to securities. Some of these markers are whether the instrument is readily tradable on an established securities market, has an ascertainable fair market value, and serves as a close economic proxy to a security. The GCM thus concluded that the mortgage-backed certificates are securities for purposes of Sec. 1091 because they have these characteristics.Therefore, MBSs satisfy the 50% test because they are securities and also the 90% test because they are generally interest-producing investments.

REITs: A REIT is structured with the goal to provide certain benefits such as diversification and at the same time reduce some of the complexities generally associated with direct investing in real estate, such as liquidity and transparency. The REIT legislation, enacted in 1960, modeled REITs after RICs. Similar to RICs, REITs must meet certain requirements under Sec. 856 to qualify for REIT status and to not pay U.S. federal income tax at the entity level. Among a number of those requirements under Sec. 856(c), a REIT must meet the following tests:

Similar to RICs, REITs may be registered under the Investment Company Act of 1940. REITs may be equity REITs, mortgage REITs, public nonlisted REITs, or private REITs. Most mortgage REITs are registered with the SEC and listed on a major stock exchange, so they would have more leverage and securitization complexities. Their portfolios are generally composed of purchasing or originating mortgages and MBSs. A majority of their income is interest because they own real estate debt rather than real estate.

As a general rule, RIC and REIT shareholders are taxed similarly under Subchapter M. However, with the availability of the Sec. 199A QBI deduction since 2018, qualified REIT dividends are also eligible for the 20% deduction. While, under Regs. Sec. 1.199A-3(d), RIC shareholders can pass through QBI (generally, qualified REIT dividends) only if they receive it, a REIT can generate its own QBI due to Sec. 199A(b)(1)(B). This could potentially yield different results in the taxation of income at the shareholder level. Consider the same portfolio of MBSs that qualify as securities under the 50% test for RICs and qualify as real estate assets under the 75% asset test for REITs. Assuming all other requirements are met, the entity could be structured as both a RIC and a REIT. The chart "RICs and REITs With No Entity-Level Tax" (below) illustrates the outcome to shareholders under each entity structure. 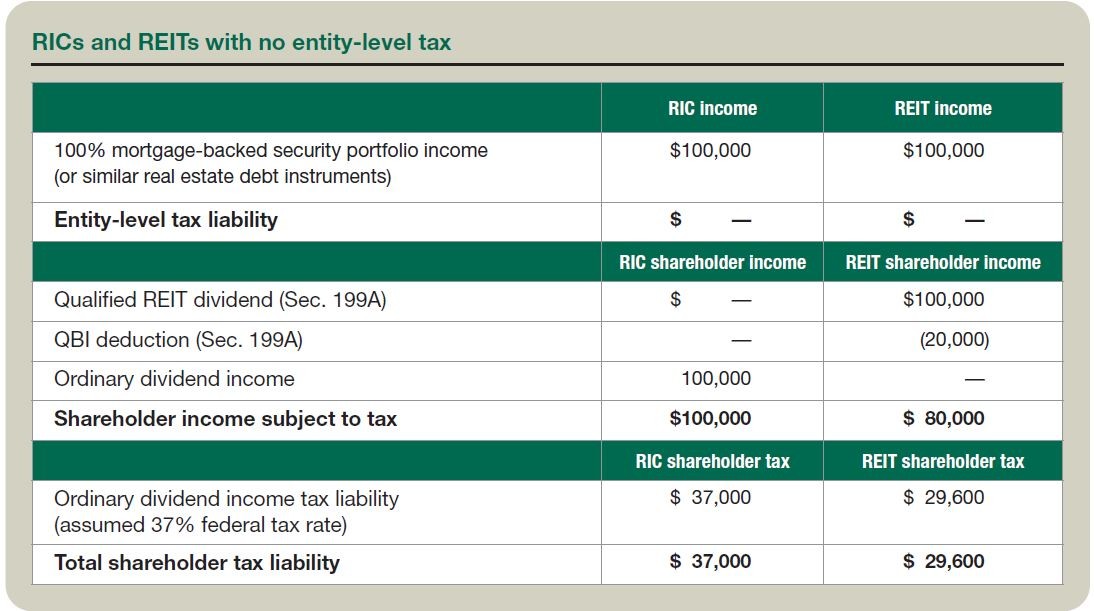 In the scenario chart "RICs and REITs With No Entity-Level Tax," there will be no entity-level tax, assuming all qualifications are met and the entities make the appropriate distributions to shareholders. All RIC dividends would be reported to the shareholders as ordinary dividend income and taxed at the appropriate rate for each shareholder. The example assumes the highest federal tax rate applies at the individual level. All REIT dividends will be reported to the shareholders as qualified REIT dividends that are subject to the passthrough deduction under Sec. 199A. Therefore, if the portfolio can qualify for both a RIC and a REIT, the REIT shareholders would not have to pay tax on 20% of the income of the REIT, which results in significant tax savings for the REIT shareholders.

The next question would be whether QDI subject to the lower long-termcapital gains tax rates can lower tax liability still more if the appropriate QDI-producing securities are included in the portfolio. According to Secs. 854(b) and 857(c), QDI can be passed through to shareholders if received by a RIC or a REIT. Generally, QDI tax rates apply if the dividends have been paid by a U.S. corporation or a qualified foreign corporation and meet certain requirements under Sec. 1(h)(11). As mentioned above, Sec. 856(c)(4)(B) provides that no more than 25% of the total assets of a REIT can be invested in securities. Consider the example in the chart "RIC and REIT With QDI and MBS Income" (below), where a RIC and a REIT both have 25% QDI (the maximum allowed 25% securities holdings for REITs) and 75% of MBS income. 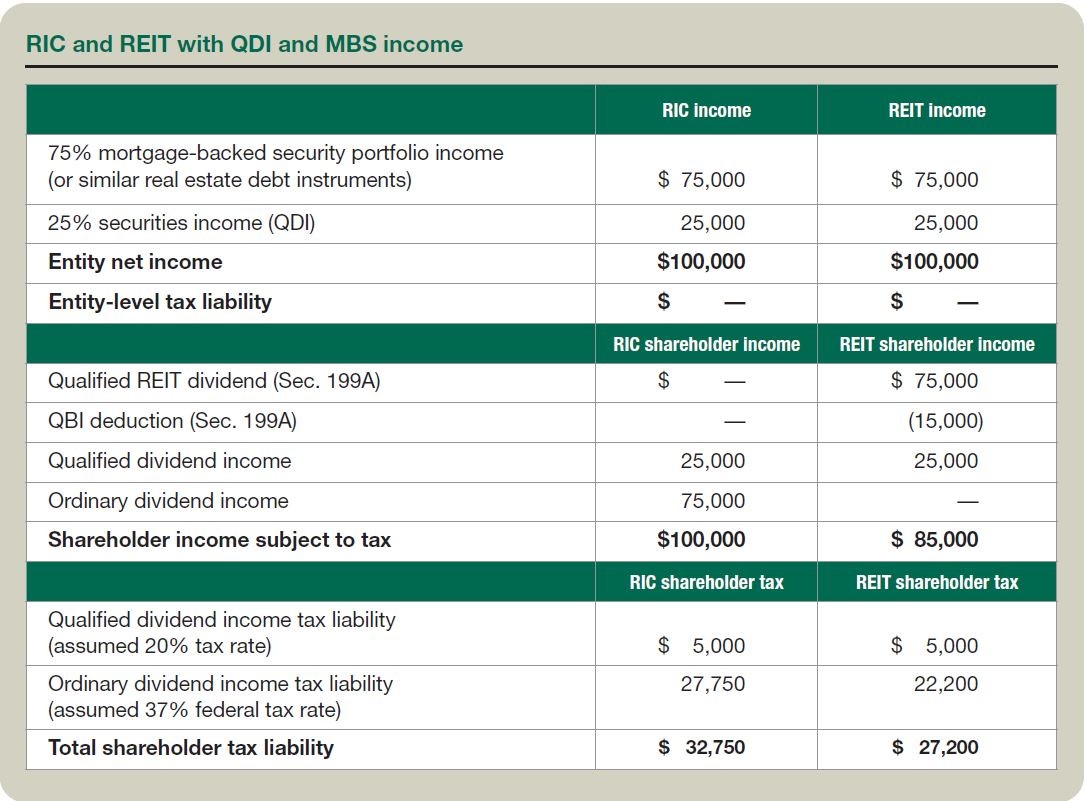 Similar to the first example, neither entity will be subject to tax if all qualification requirements are met. Additionally, the shareholders of both entities get the benefit of the lower QDI tax rates, subject to the holding period limitations under Sec. 246(c), on 25% of the income. The example assumes the maximum tax rate on QDI at the individual level. Comparing this example to the first one, the RIC shareholders will see a significant reduction in tax due to 25% of the income being taxed at lower rates. The REIT shareholders will see a slight reduction in their tax liability with the addition of the QDI; however, the passthrough deduction is still the major driver of the tax savings. The overall result is less tax liability for the REIT shareholders due to the 20% Sec. 199A deduction on QBI.

There are many tests, compliance requirements, and strategy considerations for RICs and REITs before the application of QBI tax savings can even be considered. However, assuming all requirements are met and the same portfolio can qualify as a RIC or a REIT, Sec. 199A provides a significant tax advantage to REIT shareholders. Fund managers should consider all tax consequences before deciding on an entity structure.