Bridging the gap: GILTI and AAA

The law known as the Tax Cuts and Jobs Act (TCJA), P.L. 115-97, disrupted many traditional international tax norms, including the treatment of passthrough entities as separate when determining certain inclusions generated by foreign investments. For decades, domestic passthroughs were treated as separate entities when determining an investor's Subpart F inclusion related to investments in controlled foreign corporations (CFCs). However, in 2019, the IRS changed course in final (T.D. 9866) and proposed (REG-101828-19) regulations addressing the treatment of owners of passthrough entities. Although the IRS then finalized the portions of the proposed regulations (T.D. 9902), the rules regarding the treatment of domestic partnerships remain proposed as of this writing. These regulations provide rules that look to treat passthroughs as an aggregate of their owners, rather than as entities, when determining global intangible low-taxed income (GILTI) or Subpart F income inclusions (deemed inclusions). This cosmic shift created a gap between pre-TCJA systems applying an entity approach and the post-TCJA system of computing deemed inclusions applying an aggregate approach.

The aggregate approach to deemed inclusions prevents an increase of the AAA at the S corporation level, despite the previously taxed but undistributed earnings of the S corporation. The gap in systems created adverse consequences for many shareholders of S corporations with AE&P. However, the IRS provided temporary relief with guidance released on Sept. 1, 2020 (Notice 2020-69). Notice 2020-69 provides a new entity election that allows an S corporation to compute the deemed inclusions at the entity level, as opposed to at the shareholder level, allowing the deemed inclusions to increase the AAA. This item provides background on the new entity election, illustrates its effects, and highlights opportunities and traps to consider when contemplating the election.

The entity election provided by the notice is generally available if the S corporation:

With respect to the first tax year ending on or after Sept. 1, 2020, an S corporation may irrevocably elect to apply entity treatment on a timely filed (including extensions) original Form 1120-S, U.S. Income Tax Return for an S Corporation. For tax years of an S corporation ending before Sept. 1, 2020, and after June 21, 2019, the S corporation and all its shareholders may irrevocably elect the entity treatment on timely filed (including extensions) original or amended returns filed by March 15, 2021.

For tax years that ended before June 22, 2019, the IRS issued previous guidance (Notice 2019-46) announcing its intent to issue regulations that would permit certain domestic partnerships or S corporations to apply the 2018 proposed GILTI regulations, including the hybrid approach in proposed Regs. Sec. 1.951A-5, in their entirety for tax years that ended before Jun. 22, 2019. Given the availability of entity treatment under those rules, the election is not necessary for such periods.

To illustrate the impact of the new entity election, a few simple fact patterns are examined:

As seen in the table above, the election significantly reduces the overall tax paid by the shareholders in the year of the distribution. However, in doing so, the election increases the tax incurred by A due to the inclusion of its pro rata share of GILTI.

By utilizing the entity treatment election, S corporations are provided the benefit of temporary increases to AAA that can be used to create a tax-free distribution of property to their U.S. shareholders. The election may allow for more tax-efficient distributions of excess domestic cash or property utilizing the AAA created by foreign earnings. This scenario is illustrated below in Example 2.

Example 2: B and W are U.S. shareholders who each own a 50% interest in an S corporation, L. L wholly owns T, a CFC. Neither B nor W is considered a Sec. 958(a) shareholder with respect to any other CFCs. As of Jan. 1, L does not have a balance within its AAA, as a result of previous distributions, and has AE&P of $200. L has excess cash generated by domestic operations. L makes the entity election to apply the transition rules allowing for entity treatment of deemed inclusions. During the tax year, L has $10 of ordinary income, and T has $75 of tested income (within the meaning of Regs. Sec. 1.951A-2(b)(1)). T has no tax basis in tangible assets, and thus there is no net deemed tangible income return (within the meaning of Regs. Sec. 1.951A-1(c)(3)). On Dec. 31, L distributes $75 of the excess cash to its shareholders, B and W.

L's distribution of $75 to its shareholders is treated as tax-free to the extent of the AAA ($85), which resulted, in part, from the entity election. L's balance in the transition AE&P account remains $200 ($200 – $0), and L will be able to continue to apply the entity treatment until the remainder of the transition AE&P is depleted (see the table below). 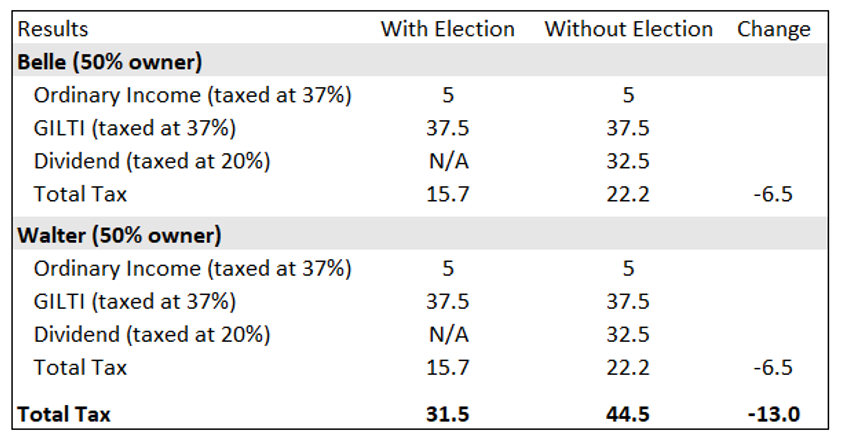 Similar to Example 1, L is able to increase its AAA by the GILTI inclusion of $75, and both shareholders will include their pro rata share of the deemed inclusion in gross income. This increases the AAA created by the domestic earnings ($10) by the GILTI inclusion ($75), resulting in total AAA of $85 prior to distributions. As seen in the table above, without the election, B and W would have to pay tax on their GILTI inclusion, ordinary income, and the distribution out of AE&P in excess of the AAA without GILTI. However, the entity election allows L to increase its AAA by the deemed inclusions and provides L with the ability to distribute additional tax generated by the domestic operations. Thus, even if L intends on reinvesting T's offshore earnings, it may nevertheless use the AAA created by such earnings to efficiently access domestic cash or property.

Opportunities and next steps

S corporations with AE&P and their tax professionals should consider the effects of the notice and any subsequent regulations. The election creates another earnings pool to track but can provide temporary relief to S corporations when computing the AAA. S corporation shareholders often look to maximize the AAA in order to minimize the amount of distributions in excess of the AAA classified as a dividend from AE&P. This is another tool in the toolbox to accomplish this and can be used to access cash unrelated to the foreign operations.

Making the entity election may provide significant benefits to applicable S corporations. But, as illustrated above, it's not without its traps and may increase the tax of certain shareholders. As a result, taxpayers should carefully evaluate and model the impacts of the entity election, weighing its pros and cons.

Greg A. Fairbanks, J.D., LL.M., is a tax managing director with Grant Thornton LLP in Washington.

For additional information about these items, contact Mr. Fairbanks at 202-521-1503 or greg.fairbanks@us.gt.com.

Contributors are members of or associated with Grant Thornton LLP.