As tax season 2021 dawned, CPA tax preparers and their clients were already adept at managing COVID-19-related constraints from the previous year, and by the end of this year's season (postponed to May 17) this evolution of tax practices' ways of working had become second nature, if not permanent. But retroactive tax relief passed by Congress well into the season, on March 11, while welcome, complicated millions of returns in process or already filed. Because practitioners looked to tax preparation software providers to update their systems correspondingly, this year's survey asked about that experience in addition to performance by the usual measures.

Another change for 2021 is that the survey did not ask about respondents' experience with clients' tax-related identity theft, as it had the prior five years. For one reason, the percentage of respondents saying one or more clients had been victims during the season had fallen steadily from a high of nearly 60% in 2016 to only 17% in 2020. For last year's survey results, see "2020 Tax Software Survey," 51 The Tax Adviser 586 (September 2020).

Anecdotally, one driver of participation and interest in the survey is many tax preparers' curiosity about whether tax season might be less stressful with a different product than the one they have and whether they would realize greater value for what many of them regard as an outsized expense. Year-over-year changes in representation of each product might reflect switching or wider adoption of a product, but the relative representation of firm sizes in the respondent sample is likely a factor, too (see the sidebar, "Results and Methodology," at the end of this article).

The survey allowed respondents to select their software from among 13 products listed and write in others. As usual, seven products predominated:

The remaining six named products (GoSystem Tax RS, Intuit ProConnect Tax Online, TaxAct, TaxSlayer Pro, TaxWise, and TurboTax) and write-ins garnered 11.3% of responses and are not included in the charts and most of the discussion that follows. More information on all 13 products is available here.

Again, use of some products tends to correlate to smaller or larger firms. This is most pronounced in the 30% (among users of the seven "major" products) of sole practitioners surveyed who used Drake Tax and the 35% of respondents in the largest firms (those of over 500 preparers) who used CCH Axcess Tax (see the table "Favorites by Firm Size," below). By the same token, respondents with larger firms tend to have had less say in the choice of software than in smaller firms. Asked how much involvement they had in purchasing the software, only 9% of users of the seven major products combined said they were not involved. This was highest for CCH Axcess Tax at 27% and CCH ProSystem fx at 21%. Respondents with some involvement in choosing any of the major products were 19% of the total, and 71% made the decision themselves, including nearly 97% of ATX users and 91% of Drake Tax users.

Users' overall rating of their software diverged little from the average 4.3 for all seven products (on a 1-5 scale, with 5 as the highest) but was highest for Drake Tax at 4.6 and lowest for CCH Axcess Tax at 4.1 (see the table "Overall Ratings," below). Drake Tax users also gave their software the highest average rating among the seven for ease of updates and installation, ease of use, how well it handled updates, and ease of electronic filing. However, they gave it relatively low marks on integration with other software at 3.0 (the same as ATX users). Asked how easily the software handled transfers of data within returns, UltraTax CS users gave it the highest rating (4.5). Drake Tax users most often recommended it for anyone starting a tax practice (96%). Only 62.6% of CCH Axcess Tax's users said they'd make the same recommendation for that software, perhaps consistent with their lower rating of that product for ease of use (3.7). However, CCH Axcess Tax and CCH ProSystem fx scored higher than other products for ease of importing data (both 3.6). 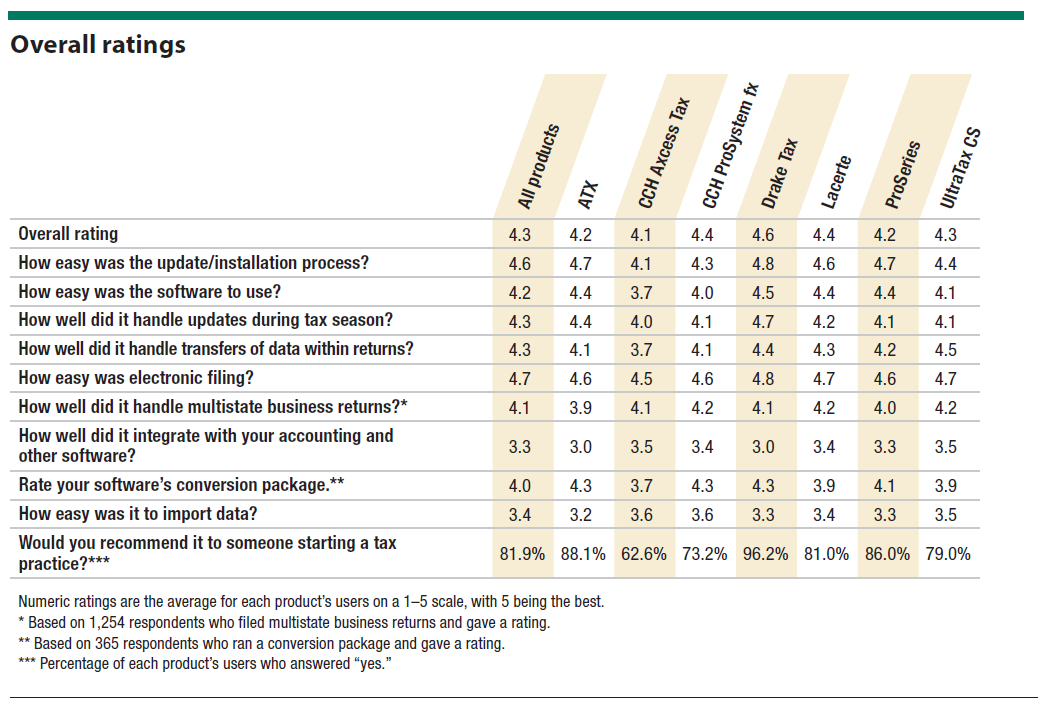 Respondents could choose up to three attributes they most liked and disliked; the percentages given are of the number of users of each product picking that feature or consideration (see the tables "Top Likes" and "Top Dislikes," below). These choices are mostly consistent from one year to the next; as in 2020, users of all seven products combined most often liked their software's number of forms/comprehensiveness. CCH Axcess Tax was the most appreciated in this respect at nearly 78% of users, followed closely by CCH ProSystem fx at nearly 77%, against an average for all seven products of 55%. (However, when respondents were asked separately if their software contained all necessary forms, users of CCH Axcess Tax answered yes only 84.7% of the time, surpassed in this measure by UltraTax CS at 90.7%, CCH ProSystem fx at 90.4%, and ATX at 88%.) 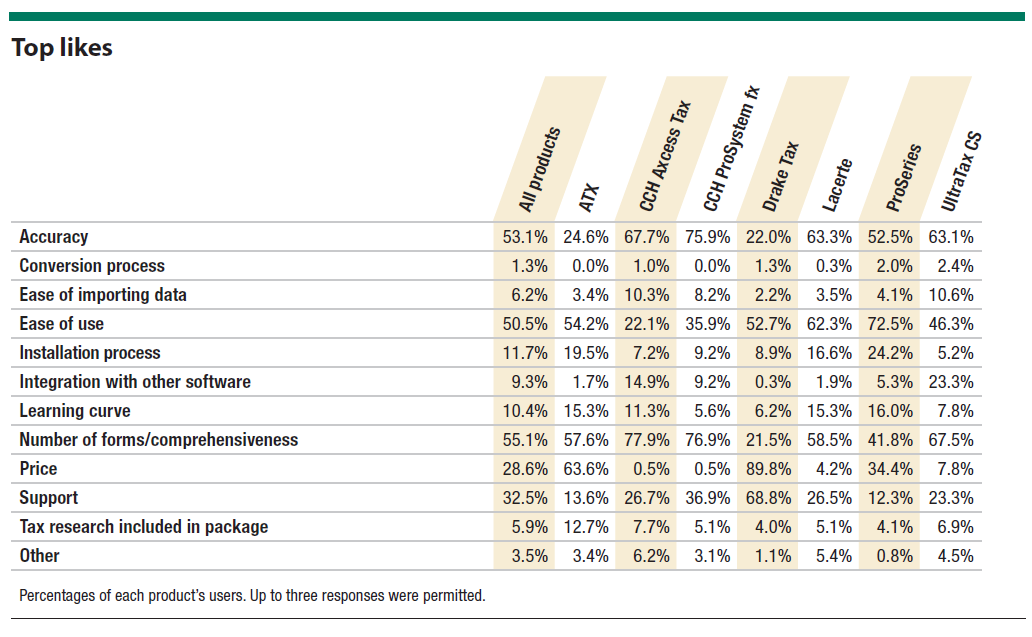 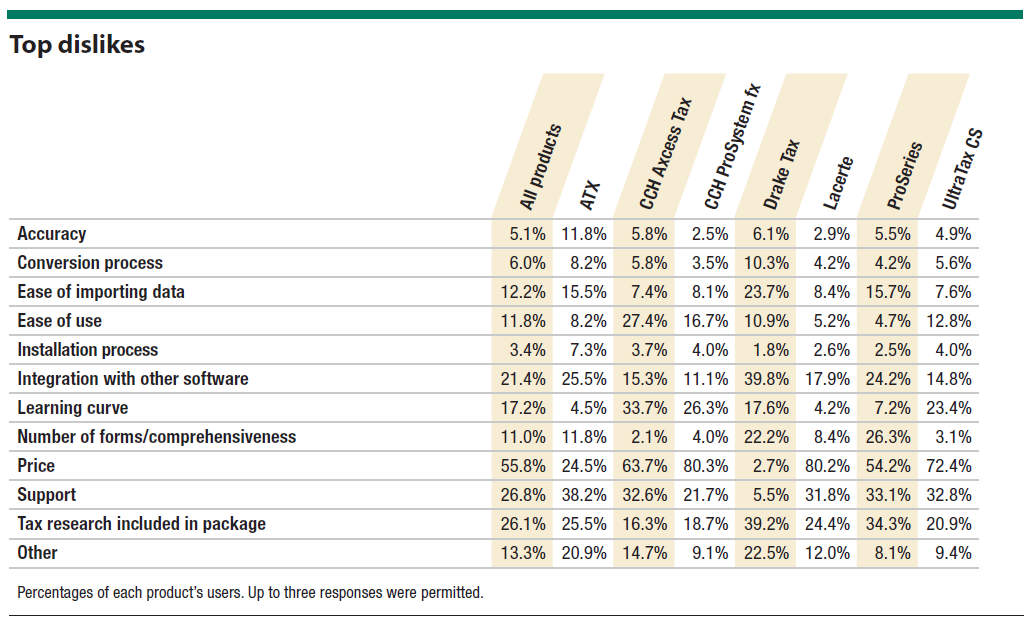 Drake Tax was by far the least often liked for both number of forms/comprehensiveness and accuracy, but its users signaled ample appreciation for its price, at nearly 90%, against an average of 28.6% for all seven products. ATX's price also was liked by a significant number of its users at 63.6%.

For the third most often liked trait, ease of use, ProSeries was highly esteemed at 72.5%, against 50.5% for users of all the major products.

Top dislikes showed a familiar pattern of price antipathy, with Lacerte and CCH ProSystem fx users the most disaffected in this regard, both at 80%. In keeping with most Drake Tax users' liking of its price, only 2.7% of them gave it a thumbs-down in this respect. However, nearly 40% of Drake Tax users found fault with its integration with other software, nearly double the average. By nearly the same percentage, they also disliked "tax research included in package."

The adequacy of product support also was often a perceived shortcoming, more or less uniformly across the products except for Drake Tax, with only 5.5% disliking it. This corresponded with a relatively high rate of likes for its support at nearly 69%, more than double the average.

Among the 240 "other" write-in dislikes for the major products, problems with state and local returns were a common refrain, with complaints about missing forms or less-than-robust multistate capabilities. Twenty users' negative comments included the word "update," scattered among most of the products. Users of CCH Axcess Tax were a slight majority of the 17 comments containing the word "slow," with a few saying the software seemed to run faster as a local network program, before it became exclusively cloud-based. However, about the same number of CCH Axcess Tax users mentioned its cloud-based operation favorably in write-in likes.

Whether because of perceived slower operation or other reasons, respondents working in and saving to the cloud remain a minority, although this shows some evidence of change. This year, 22% of users of the major products said they ran their software on the vendor's server rather than on their own hard drive or network, up from 18% in 2020. After the 85% of CCH Axcess Tax users who said they operated that software from the vendor's server, the next highest percentage was among users of UltraTax CS at 36%. Users of the other major products did so predominantly on their own hard drive or network, all above 90%.

How users obtain technical support also remains largely old-school; by and large, they pick up the phone (see the table "Technical Support," below). The 91% of them reporting using that method was nearly the same as last year, and the 30% using email and the 32% live chatting and instant messaging were also little changed. 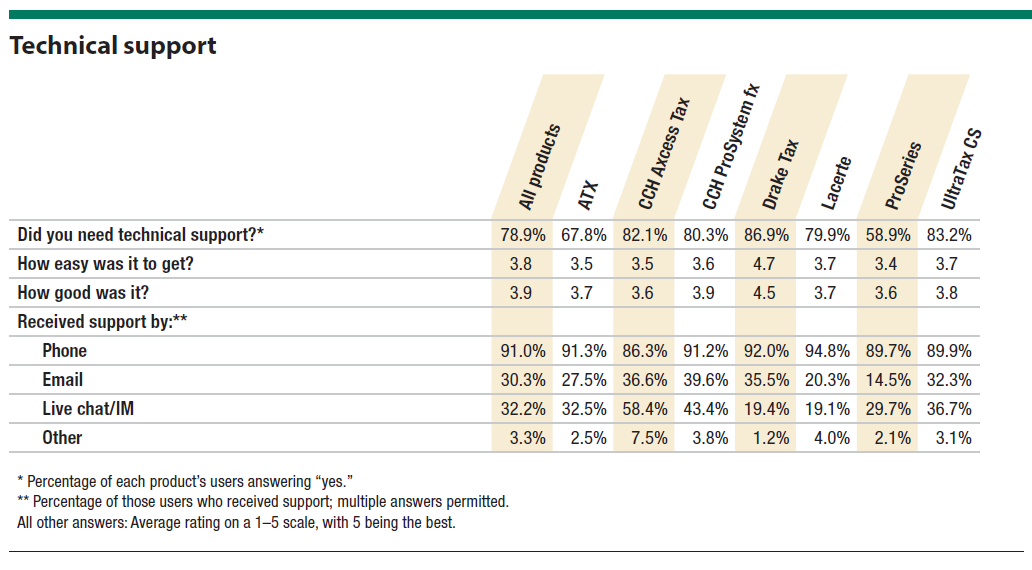 In keeping with the likes and dislikes relating to product support discussed above, users of Drake Tax gave its tech support the highest ratings for both ease of obtaining it and its quality, at 4.7 and 4.5, respectively (and were more prone to need support than others, at nearly 87%).

Drake Tax users also gave the training they received in using the software the highest rating at 4.5, against an average for all seven major products of 4.0. CCH Axcess Tax users were the respondents most likely to have received training at 74%, well above the average of 46%, but they had the lowest opinion of it, at 3.6.

No two tax years are alike, and the 2021 season was perhaps the most unsettled that practitioners are likely to have seen in one respect. While it has not been unusual for Congress to retroactively renew "extenders," those temporary but regularly reauthorized tax provisions, the passage of the American Rescue Plan Act (ARPA), P.L. 117-2, on March 11, 2021, introduced major new provisions effective for 2020, some requiring wholesale redetermination of adjusted gross income (AGI), taxable income, and other implicated calculations. Besides waiting for the IRS to issue guidance on how to implement these changes midseason, preparers were looking to their software providers to give them the tools to do so. In the view of a majority of respondents, the seven major products by and large did a reasonably good job; they gave their software an average rating of 4 out of 5 (with 1 being "very poorly" and 5 "very well") (see the table "Handling Retroactive Changes," below). There was little variation among the products in this regard, except for Drake Tax's above-average 4.6 rating.

Probably, the retroactive change affecting the most taxpayers the most dramatically was ARPA's exclusion from gross income of up to $10,200 per taxpayer (or per spouse if married filing jointly) of unemployment compensation benefits received in 2020, subject to a modified AGI phaseout. Of the 1,233 write-in answers the survey received to what retroactive change their software handled particularly well or poorly, 684, or well over half, included the word "unemployment." Eighty respondents mentioned ARPA's forgiveness of any repayment of excess advance premium tax credits in 2020 (with several saying that this relief provision seemed to take a long time to be reflected in their software), and 57 answers contained the words "rebate" or "stimulus," alluding to ARPA's third round of economic impact, or stimulus, payments, alternatively refundable on returns as a recovery rebate credit.

Some of the comments, particularly those about the unemployment exclusion, complimented the software's adaptation. Others disapproved of slowness in implementing the changes, with some seeming to take it in stride or excuse software providers as having been handed a quandary by Congress. For a few, it was an ordeal, with one mentioning "impatient" clients and another deeming the whole experience "horrible." For those impressions, here's to a more manageable tax season in 2022. And whether that experience turns out good, bad, or indifferent, when it comes to the contributing role of tax preparation software, CPAs can expect another sounding board in the form of this survey.

The 2021 survey was conducted June 1-15. Invitations were sent by email to 109,508 AICPA members who had indicated they have a professional interest in taxation. The results reflect answers of the 2,154 respondents who said that they prepared tax year 2020 returns for a fee. Although this year's survey garnered fewer respondents than the 2020 survey, which tabulated 3,210 responses, their profile by the size of firms for which they prepared returns was largely consistent with prior surveys, with a few differences: Respondents in firms of between 101 and 500 preparers were 5.2% of the sample this year, while in the previous six years they had never been above 2.1%. Those in firms of between six and 20 preparers were relatively fewer, at 14.2%, compared with an average of 19% in the previous six years. The biggest cohort, sole practitioners, was up slightly at 36.4%, compared with the previous six years' average of 34.3%. These shifts should be borne in mind when assessing small year-over-year differences.