Given how central professional-grade return preparation software is to tax practices, each year the The Tax Adviser and Journal of Accountancy ask CPAs what product they use and how it worked for them in the most recent season. For the 2022 season, seven products again predominated, and they are the ones tallied in most of this article's charts and discussion. For last year's survey, see "2021 Tax Software Survey,"52 The Tax Adviser 576 (September 2021).

The survey allowed respondents to select among 13 listed products and to write in others. Those used by the greatest percentages of respondents were:

The remaining six products (GoSystem Tax RS, Intuit ProConnect Tax Online, TaxAct, TaxSlayer Pro, TaxWise, and TurboTax) together accounted for 11.1% of responses, and another 1.3% of respondents wrote in an entry. For relative usage of all 13 products and more background on the seven major products, such as available packages and their basic features, see "2022 Tax Software Survey: Shares of Respondents and Product and Company Information."

The survey asked about the size of the firm in which respondents prepared returns, as certain software products tend to be used in bigger or smaller firms. For example, Drake Tax was the predominant choice among sole practitioners at 30%, followed by ProSeries at 23%. At the other end of the spectrum — firms of 501 or more tax preparers — CCH Axcess Tax was the most used at 37% (and was used by only 3.7% of single-preparer firms) (see the table "Favorites by Firm Size," below). UltraTax CS and Lacerte were the most consistent in their proportion of use across all firm sizes.

Most respondents — 74% of the total number of users of the seven major products — were the sole person responsible for choosing their tax software, with another 16.2% having some input into the decision. Naturally, the "deciders" were more concentrated in the smaller firms, and, again, small firms tend to favor certain products over others. Nearly 94% of ATX users had made the decision to use it, followed closely by ProSeries at 93% and Drake Tax at 92.7%. CCH Axcess Tax users were the most likely to have not been involved in the decision at 28.8%.

Only Drake Tax users gave the product an average overall rating significantly above the average for all major products (4.6, versus 4.3 for all major products, on a 1—5 scale, with 5 being the highest — see the table "Overall Ratings," below). Some of the highest marks respondents gave were for Drake's ease of updating and installation, how well it handled updates, and ease of e-filing, all 4.8. Also scoring 4.8 was Lacerte's ease of e-filing and ProSeries's ease of updating and installation. The lowest average rating was for ATX's integration with accounting and other software (2.9), although integration tended to be rated lower across the board than other such features the survey asked about. Drake Tax users rated its integration with other software also a relatively low 3.1. 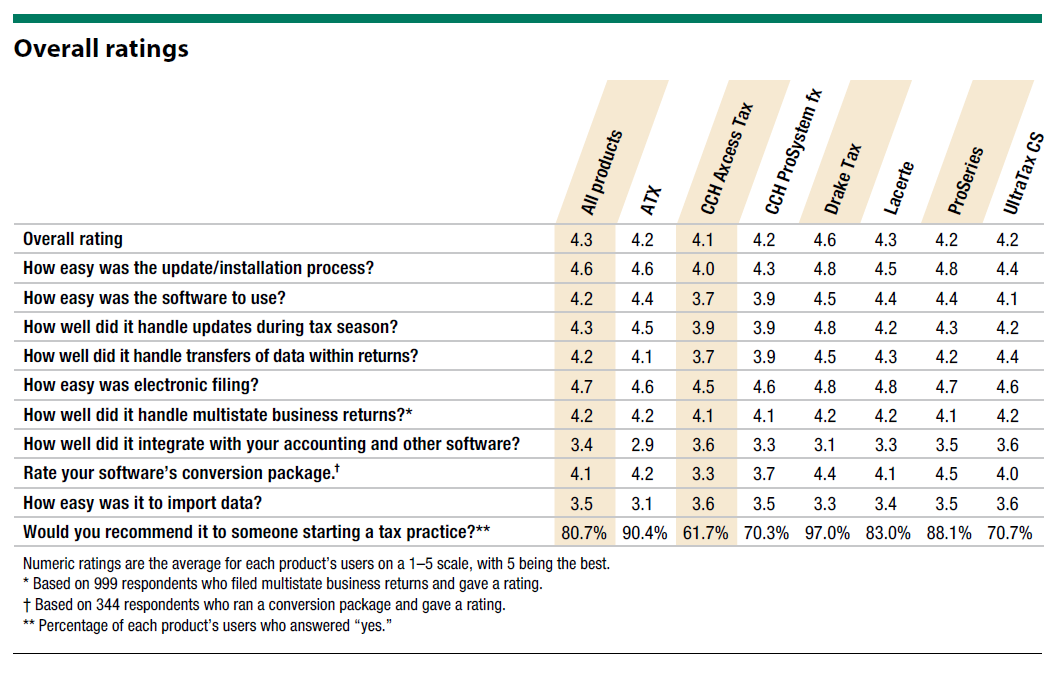 Asked if they would recommend their software to someone starting a tax practice, 97% of Drake Tax users said yes. The lowest percentage of users answering yes to that question was 61.7% of users of CCH Axcess Tax. CCH Axcess Tax scored lower than the other major products on ease of the update/installation process, ability to transfer data with returns, ease of e-filing, and ease of use generally.

Respondents were able to choose up to three out of 11 attributes they most liked and disliked in their tax software and could write in others (see the tables "Top Likes" and "Top Dislikes," below). 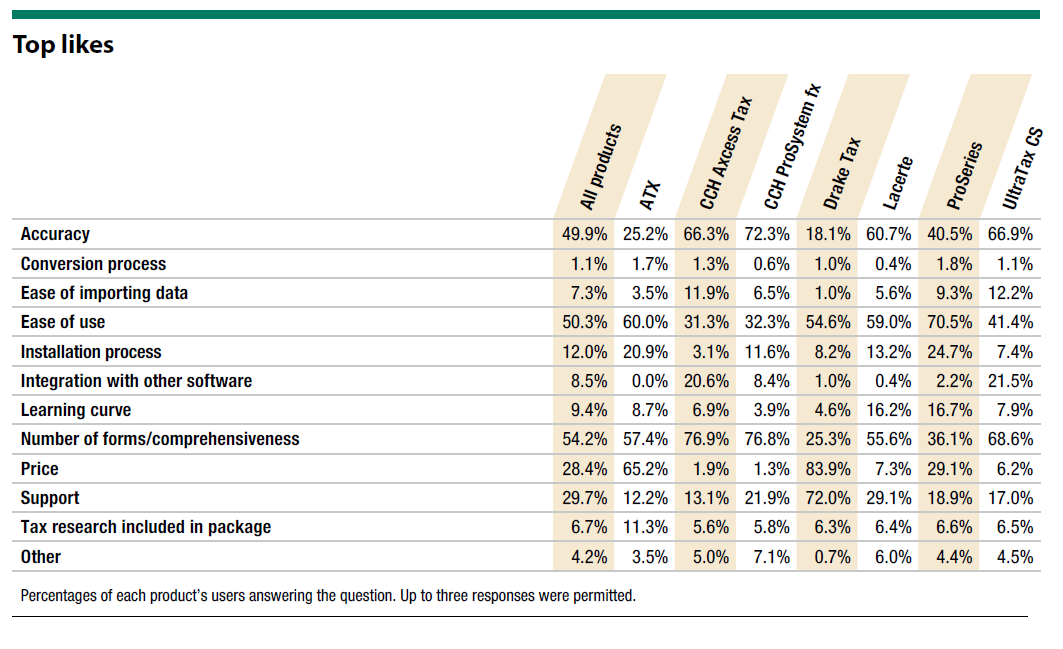 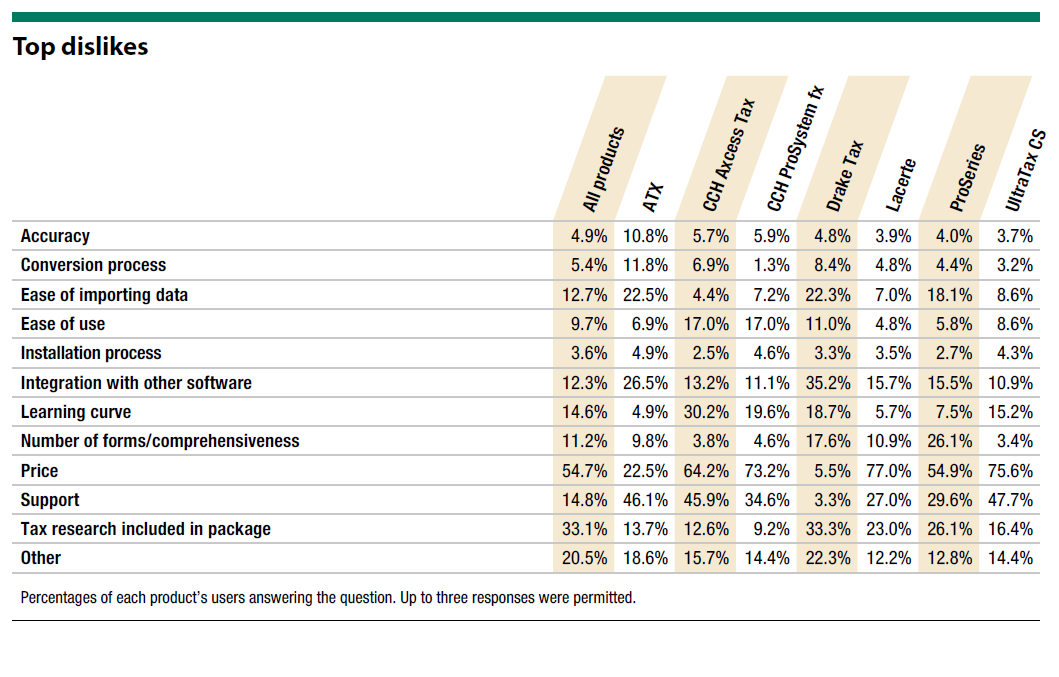 Not shown in the tables are responses to a separate but related question of whether the software contained all necessary forms. The highest percentage answering yes were UltraTax CS users (91%), followed by users of CCH ProSystem fx (88%) and CCH Axcess Tax (86.3%).

Drake Tax's users were most likely to approve of its price. Nearly 84% of its users did. Prices of ATX and ProSeries were liked by 65.2% and 29% of their users, respectively.

Support, another area where users often have strong opinions, also showed some striking differences among the products in both tables. Drake Tax users gave the highest approval of its support at 72%, with only 3.3% disliking it. Support was the highest dislike, however, among users of ATX and second highest (after price) by users of the five remaining products other than Drake and ATX: CCH Axcess Tax, CCH ProSystem fx, Lacerte, ProSeries, and UltraTax CS. Another question, discussed below, delved further into users' assessment of the products' technical support.

By and large, CPAs are reluctant to adopt cloud operation of their tax software, despite recent years' pandemic-driven disruptions to office life. At least that's the impression left by the 78% of users of all major products who said it resided on their own hard drive or network. That percentage holds steady from 2021 and is only a slight decrease from 2020 (82%). The shift corresponds with a 4-percentage-point upward blip between 2020 and 2022 in respondents saying the program lived on their vendor's server (from 18% in 2020 to 22% in 2022). Wide disparities among the products were evident on this feature, however. More than 84% of CCH Axcess Tax users reported that the program was on their vendor's server, but only 34.7% of UltraTax CS users said the same. Fewer than 10% of the users of the other top software programs said the program was in the cloud. (Anecdotally, some CCH Axcess Tax users appreciated its cloud-based operation, with three write-in "other likes" mentioning that feature as a plus.)

Technical support was most often obtained by telephone rather than by electronic means (see the table "Technical Support," below). For all the major products, 91% of users who needed technical support accessed it by phone, with 30% accessing it by live chat or instant messaging (IM) and 28% by email. CCH Axcess Tax users were by far the most likely to use chat/IM for technical support, with 59.4% reporting they did so. 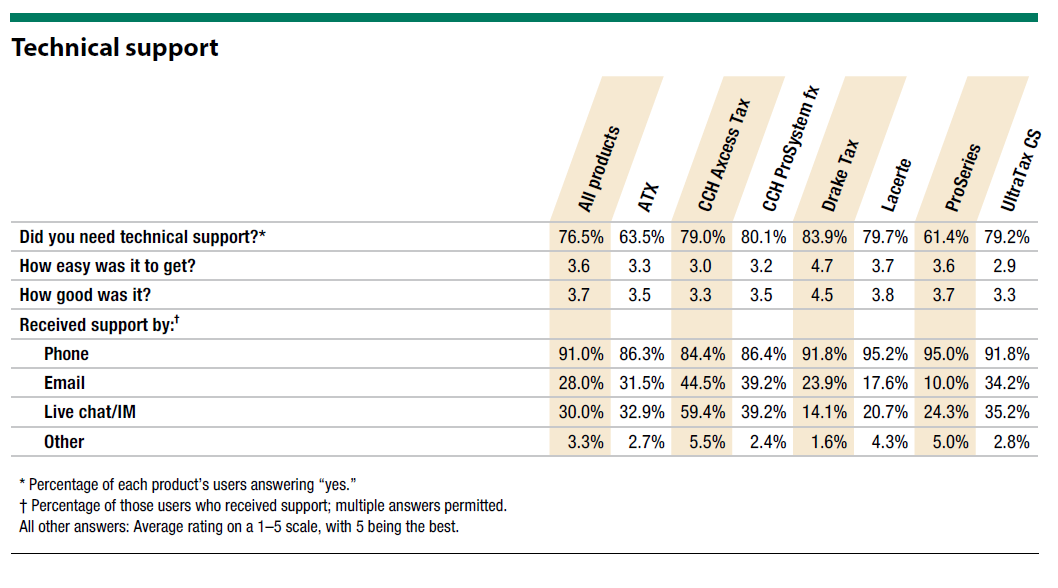 Ideally, users of tax software would not need technical support at all. In reality, however, the majority of users did need it, although the percentage requiring support was lowest for ProSeries at 61.4% and ATX at 63.5%. In keeping with Drake Tax users' approval in the "Top Likes" table for its support, that software received the highest ratings for ease in getting support (4.7) and for its quality (4.5).

Asked whether they received training in use of their software and, if so, how they rated that training, ATX users had training least often at 11.3%. Most likely to have received training were users of CCH Axcess Tax at 62.3%, although they had the next-to-lowest opinion of it at a rating of 3.8 (the lowest was for CCH ProSystem fx at 3.6, with fewer than one-third, 32%, receiving training). Complaints about training also turned up in "other dislikes" for several of the products. Almost a majority of Drake Tax users, 49.7%, received training, and these respondents also gave that training the highest rating of any of the major products, 4.5.

The 2022 survey was conducted May 4–18. Invitations were sent by email to 75,553 AICPA members who had indicated they have a professional interest in taxation. The results reflect answers of 1,778 respondents who said that they prepared tax year 2021 returns for a fee.