Along with frustrating backlogs, declining audit rates have been the topic of many accountant discussions regarding how IRS budget constraints have affected taxpayers. The latest IRS statistics confirm the declining audit numbers.

On May 26, 2022, the IRS released its Data Book, 2021 (Publication 55-B). The Data Book, published annually since 1863, contains statistical tables describing a full range of IRS activities, including returns, collections, refunds, enforcement, and the IRS workforce. The recent report covers the fiscal year ending Sept. 30, 2021. This is the first full tax year affected by COVID-19.

Normally, a taxpayer who qualifies for the earned income tax credit (EITC) has income under $100,000. The relatively high audit rate for the EITC includes the IRS EITC anti-fraud initiatives.

To understand the significance of the 2019 audit rates, it is important to compare them with those of prior years. The table “Audit Rates Over Time,” below, compares audit rates for tax years 2017 and 2010. Here we can see a dramatic decline in the percentage of taxpayers audited over the eight-year period, with the largest decreases in the highest income categories. 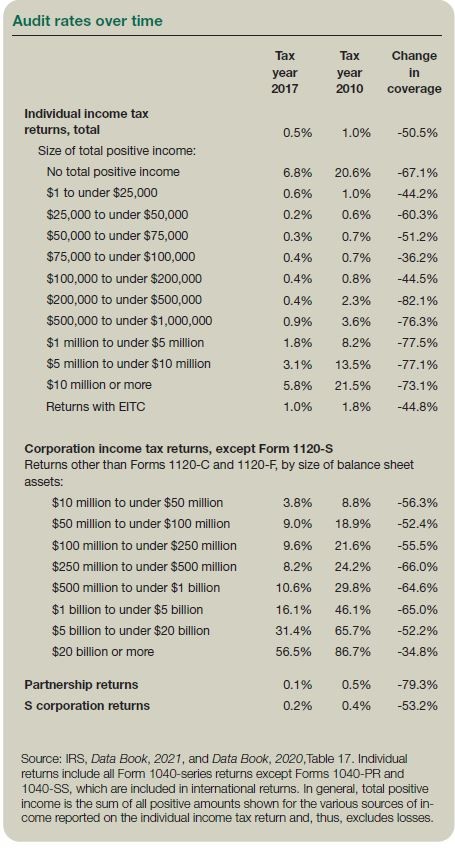 The IRS claims to aggressively audit high-income taxpayers and businesses; yet these statistics show that even by 2017 the overall audit rates had declined precipitously, with high-income returns seeing the greatest decline in audits. For example:

The Transactional Records Access Clearinghouse (TRAC) at Syracuse University noted that in 2021, “out of over 160 million individual income tax returns that were filed, the IRS audited 659,003 — or just 4 out of every 1,000 returns filed (0.4%)” (Syracuse University TRAC, “IRS Audits Poorest Families at Five Times the Rate for Everyone Else” (March 8, 2022)).

“Despite this modest improvement [in 2021], [the] IRS was still only managing to conduct about a third of the millionaire audits it had completed during fiscal year 2015” (id.).

Ebeling also attributes the reduction in audit rates to IRS staff shortages resulting from decreased funding, and elaborates: “Since fiscal year 2011, the number of tax examiners who work basic audits, usually by mail, decreased by 18%, and the number of revenue agents who work on complex in-the-field audits decreased by more than 40%.”

In conclusion, the IRS, primarily due to funding cuts, employs significantly fewer revenue agents and tax examiners than a decade ago. This has led to an overall decline in audit rates for individuals and corporations. High-income taxpayers have received the greatest reductions proportionately in audit rates. Indications are that the significant attrition of revenue agents and tax examiners will continue. Even with increases in funding, it appears that the IRS is years away from having a robust core of tax examiners and from having audit numbers comparable to 10 years ago.

Robert M. Caplan, CPA, is a partner with Caplan & Wong CPAs LLP in San Mateo, Calif., and a member of the AICPA IRS Advocacy & Relations Committee. For more information about this column, contact thetaxadviser@aicpa.org.