Not only has the form been completely redesigned, Harris noted, but final regulations that became effective Dec. 2, 2020, will affect treatment of unrelated business taxable income (UBTI). The final regulations (T.D. 9933) implement provisions of the law known as the Tax Cuts and Jobs Act, P.L. 115-97, that require exempt organizations to “silo,” or separately compute, UBTI for multiple unrelated businesses. For example, under the new rules, a charity that operates a thriving office rental business can no longer offset taxable revenue with losses from a failing gift shop. An organization will also have to classify each unrelated trade or business using a two-digit North American Industry Classification System (NAICS) code.

Harris, along with tax-exempt experts Lisa Heller, CPA, and Stephen Clarke, J.D., will walk practitioners through these important changes at the upcoming AICPA & CIMA Not-for-Profit Industry Conference, which will be held live online June 7–9. During their presentation “UBI Silo-ing: Lessons Learned, Implementation Challenges and Opportunities,” they will review the implications of the final regulations and delve into real-world scenarios that will help CPAs to:

The silo law (under new Sec. 512(a)(6)) will hit colleges and universities particularly hard, according to Harris, as these institutions tend to have numerous unrelated revenue activities. A college’s substantial income from parking garages and facility rentals could, under the old law, be offset through losses from unrelated activities such as a fitness center or catering service.

An IRS study in 2013 that focused on UBTI reporting by colleges and universities found numerous compliance problems, which resulted in disallowance of $170 million in losses, including net operating losses. In many cases, the IRS said losses were claimed from activities that did not qualify as a trade or business. Calculation or substantiation errors also played a major role in underreported income, as did misallocation of expenses.

The amount of taxes paid by not-for-profits on unrelated business income has started to rise in recent years, as shown in the chart below. Narrowing the type of losses that can be used to offset income could accelerate this trend. 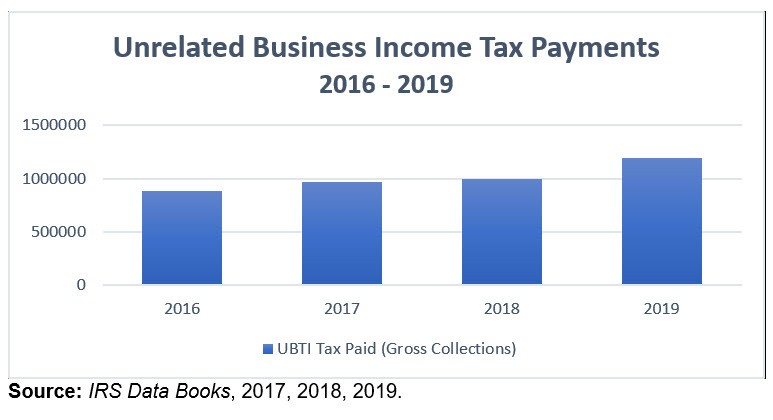 In comments to the IRS on the proposed regulations, the AICPA called for much broader two-digit codes to eliminate the complexity posed by using six, and opposed mandating the codes’ use. The new silo requirement originally “created a lot of confusion and left people guessing,” Heller said, adding that “the codes were not developed for tax purposes.” While NAICS is still mandatory, the two-digit approach was adopted, allowing far more business activities to be combined for reporting.

Complete clarity is apt to be elusive for some. A common situation involving one activity but two separate codes is advertising, Heller explained. For example, if a company pays an exempt organization to place an advertisement in the group’s online newsletter (code 51), as well as in a direct-mail piece (code 54), would they need to split reporting for those sums?

Besides advertising, the speakers will offer tips on potentially confusing scenarios like golf courses. While these recreational facilities derive revenue from multiple sources such as gift shop sales and green fees, “you can make a reasonable argument to put them [courses] under one silo,” said Stephen Clarke, managing director of the Exempt Organization Tax Services division at Ernst & Young LLP in Washington, D.C.

Some relief for reporting QPIs, but challenges remain

While the new reporting structure presents more complexity for practitioners and increased liability for some organizations, the presenters will discuss ways that the final regulations offer more leniency than the proposed version (REG-106864-18).

An important change was a clarification regarding QPIs that makes it easier for tax-exempt organizations to lump income from those interests with other investment income, generally eliminating the need to track them separately. Unlike the proposed regulations, the final regulations allow QPIs to be aggregated if the taxpayer:

The speakers all expect that the policy will allow a significant amount of investments to be aggregated, but determining whether the QPI meets the participation test may be a real headache, Clarke warned.

“It’s really hard to get that information,” he said, as groups will need to contact investment and hedge fund managers to establish their percentage interest in “downstream” investments. The presenters will share insights on how to gather that data.

Mastering the maze of NOL timelines

The conference session will also address a key area where practitioners are still waiting for IRS guidance — NOLs. Before the TCJA, an exempt organization could carry Sec. 172 NOLs back two years and carry them forward for 20 years. Under the TCJA, carrybacks are eliminated for most NOLs arising in tax years after Dec. 31, 2017, but carryforwards can continue indefinitely. The amount of a post-2017 NOL deduction that can be claimed in any year is more limited and can only be allowed against income from the same unrelated trade or business that generated the NOL.

Heller described the new rule as “a new version of AMT but worse” that could mean exempt groups actually pay more tax than a for-profit entity.

The Coronavirus Aid, Relief, and Economic Security (CARES) Act, P.L. 116-136, offers a temporary reprieve by allowing a five-year carryback for all NOLs generated in tax years 2018, 2019, and 2020. Clarke observed that it will be tricky to figure out how to apply the NOLs going forward due to the varying timelines.

While the new regulations resolved some questions, many more remain. Guidance is still pending not only for NOLs, but also for allocation of indirect expenses under the silo method.

Regardless of the size of the not-for-profit they advise, Harris says that practitioners will find the conference session useful. Even big tax-exempt organizations with in-house expertise are struggling with compliance, Clarke noted. “I can only imagine that smaller organizations struggle more,” he commented, adding that he hopes the IRS will provide a grace period in the beginning as taxpayers adapt to the new rules.

Between tax reform, ASU updates, Uniform Guidance, and other developments, it has been difficult to keep up with the recent changes affecting not-for-profit accounting. Join us online June 7–9 at the AICPA & CIMA’s Not-for-Profit Industry Conference to get the information you need to put the pieces together. A pre-conference workshop that offers two-hour sessions on topics such as compliance, organizational structure, and liability is being held June 2.

— Ann Marie Maloney is a freelance writer based in Virginia. To comment on this article or to suggest an idea for another article, contact Dave Strausfeld, a Tax Adviser senior editor, at David.Strausfeld@aicpa-cima.com.