In preparing for the purchase or sale of a valuable asset such as a corporation, most people would want to compare their options. What are the different tax costs if the transaction is structured one way rather than another?

The end result may be the same but with different tax costs. In planning for the taxable sale of a corporation, it makes sense to consider different ways to structure the transaction to minimize tax costs.

Much of tax law applies "substance over form" principles. However, the scenarios below illustrate that tax results under Subchapter C frequently depend on the "form" that the transaction takes. Taxpayers can often meet their objectives by structuring their transactions according to the form that has the most beneficial tax result.

Suppose that Corporation D owns an unincorporated business (B), and D also owns 70% of Corporation C. An unrelated corporation (P) wants to purchase C stock. In all five scenarios below, P ends up owning C stock. However, the total tax costs are highest for Scenario 1 and lowest for Scenario 5, with the tax costs of Scenarios 2, 3, and 4 being in between.

Scenario 2: D sells the C stock to P for cash, then D distributes the after-tax sales proceeds to D's shareholders.

In Scenarios 1, 2, and 3, P uses cash to make the acquisition. In Scenarios 4 and 5, P acquires the D stock by paying with P stock (instead of with P's cash).

Scenario 4: This is the same as Scenario 3, except that P acquires the shares of D (which continues to own C) by using P's own voting shares (instead of cash).

In all five scenarios, D ends up owning (directly or indirectly) C shares. In Scenarios 1 through 3, P's shareholders end up with cash, and in Scenarios 4 and 5, they end up owning P stock.

The result of each scenario — namely, the value of cash or property (net of tax) owned by D's shareholders (based on the below assumptions) — is as follows:

The taxes paid in Scenario 5 are $635 less than the taxes in Scenario 1. However, if instead the difference was $635,000 or even $63.5 million, the tax dollar difference becomes large enough to make the tax adviser a valuable member of the planning team!

Assumptions about the transaction's "players": 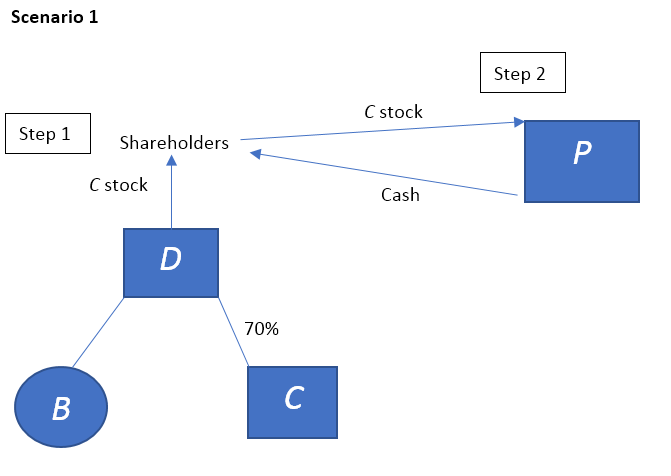 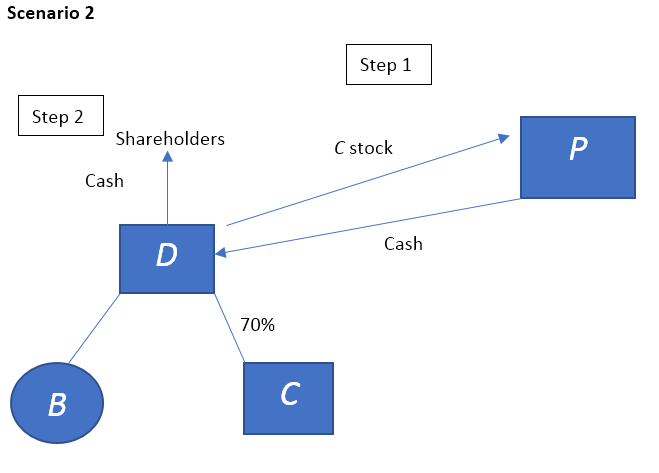 Scenario 3 (D incorporates B by contributing the B assets to a newly formed B corporation; D spins out new B Corp. to D's shareholders in partial redemption of D's shares; D's shareholders sell the stock of D (which continues to own C) for cash). 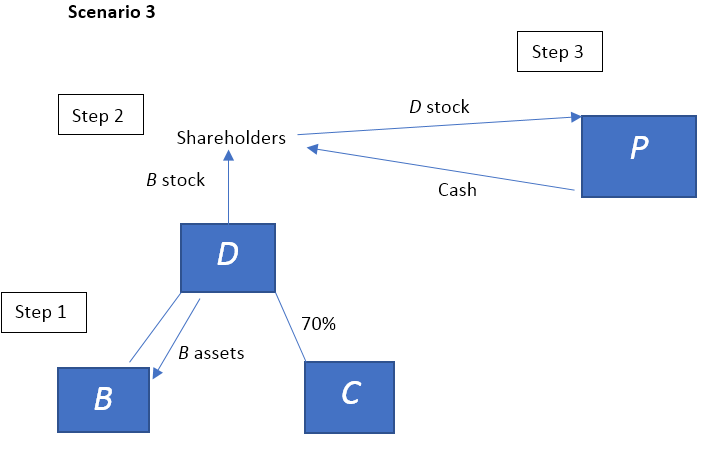 D's results: D has no gain when D contributes the B assets to the newly formed B corporation; D's basis in the B stock is $700 ("transferred" basis under Sec. 362).

Note that the distribution of B stock is not a Sec. 355 tax-free distribution because the "spin" is a "device" to facilitate a cash sale (taxable transaction of D). In addition, the "active trade or business" (ATB) rules under Sec. 355 would require that D itself immediately after the transaction be engaged in an ATB. D fails this ATB test; C's ATB would not get attributed to D because C (being owned less than 80% by D) is not part of D's "separate affiliated group."

Scenario 4 (same as Scenario 3, except that P uses its voting stock (not cash) to acquire D). 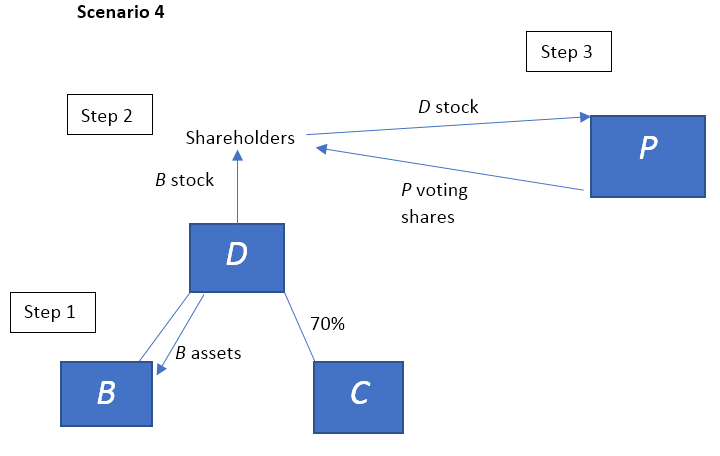 D shareholders' results: When they receive the B stock (worth $700) in redemption for some of their D shares (which have a zero basis), the shareholders recognize a $700 capital gain under Sec. 302(b)(3).

When they exchange their remaining D stock for P stock, the exchange will qualify as a tax-free B reorganization. 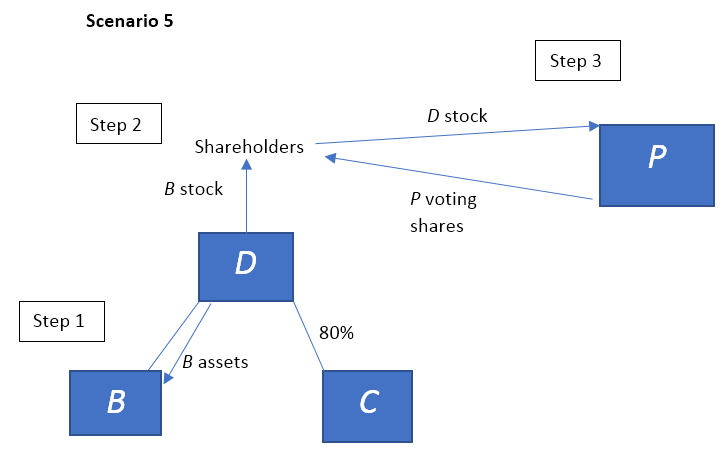 D shareholders' results: Unlike in Scenario 3 and Scenario 4, where the D shareholders recognize gain of $700 and incur $140 tax on the $700 gain as a result of receiving B stock, the transaction under Scenario 5 constitutes under Sec. 355(a) a valid spinoff of B stock so that the D shareholders would not recognize gain on the receipt of B stock. The transaction is a valid spinoff because: (1) The subsequent transaction (exchange of D stock for P stock) is not a "device" that is a taxable transaction (because it is instead a tax-free B reorganization, unlike in Scenario 3, and also assuming that the historic D shareholders do not have a plan for turning around and selling the P stock they received); (2) Unlike in Scenario 3 and Scenario 4, immediately after the transaction D is engaged in an ATB because the ATB of C gets attributed to D (as a result of D owning 80% of C); and (3) The spinoff is supported by a good business purpose, namely that P does not want to own the B business.

All five scenarios accomplish the objective of P's owning (directly or indirectly) C. However, the tax results are different in each scenario. Scenario 5 results in zero tax. If several more zeros were added to the numbers in the scenarios, there would indeed be significant tax savings opportunities! It certainly pays to consider different ways that a transaction can be structured.

Bob Aukerman, CPA, J.D., LL.M. is a principal at T.C. Tax Law and CPA in Traverse City, Mich., with over 30 years' experience. To comment on this article or suggest an idea for another article, contact Sally Schreiber, senior editor, at Sally.Schreiber@aicpa-cima.com.