Simplified Home Office Deduction: When Does It Benefit Taxpayers?

Sec. 280A(c) permits self-employed individuals and employees who work out of their home to deduct business expenses relating to the part of their home that is exclusively used on a regular basis to carry on a trade or business, or, in the case of an employee, the person has no other fixed location to perform his or her job duties. Exclusive means just that-the space is never used for a nonbusiness purpose and is regularly used for meeting with clients or customers and/or performing administrative and management activities.

If an employee works at home for his or her convenience rather than for the employer's convenience, the deduction is not allowed. 1 In limited circumstances, primarily when the home is the sole, fixed location of the trade or business, space used to store inventory or product samples may also be counted as business use. 2 It is also important to note that certain day care providers may take a limited deduction even when the space does not meet the exclusive use requirement. 3

Starting with the 2013 tax year, the IRS is offering a safe-harbor alternative to the home office deduction individual taxpayers can claim. 4 Traditionally, the Sec. 280A home office deduction requires complex computations and allocations and burdensome recordkeeping. The new alternative is a simplified method in which the taxpayer multiplies the total square footage of the business portion of the personal residence by $5. What could be simpler than multiplying the length and width of the office space to get the total square footage of the business portion of the home? But before deciding to use the simplified method, its costs and benefits should be evaluated. While many taxpayers will adopt this new method in the interests of simplicity, there are certain instances, discussed later, where simple may not be better.

Example 1: A has net income from her business before the home office deduction of $5,600. She purchased her residence for $100,000, excluding the cost of the land, has a home office of 350 square feet (10% of the house's total square footage of 3,500) and has a marginal tax rate of 15%. She paid $10,000 in mortgage interest and $3,000 in real estate taxes. The total indirect costs of operating the residence (utilities, insurance, and repairs and maintenance) are $4,800. The depreciation expense on the business portion of the residence is $256. The total deductions under each method are provided in Exhibit 1. 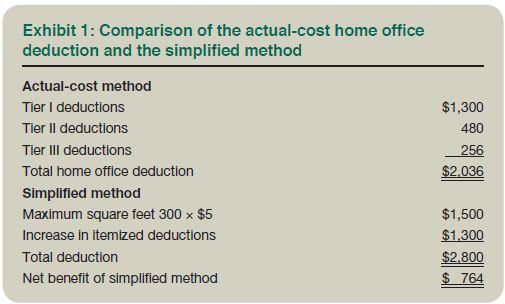 The home office actual-cost deduction has three components, as defined in Sec. 280A(c)(5):

• Tier III deductions: Allowable depreciation on the business portion of the building, usually computed on a 39-year useful life. In this example, the depreciation is computed to be $256.

• The simplified safe-harbor deduction is limited to a maximum of 300 square feet multiplied by $5 per square foot.

• Since the safe-harbor deduction is in lieu of any Tier I, Tier II, or Tier III deductions, the interest and taxes ­attributable to the home office use are deducted on Schedule A as itemized deductions.

Based on the above analysis, it would appear that the taxpayer would have a net tax savings of $115 from the additional deductions under the simplified method ($764 × 15%). However, to accurately determine the total tax savings, the following considerations should be evaluated:

When these items are factored into the computations, the net results change as illustrated in Exhibit 2. 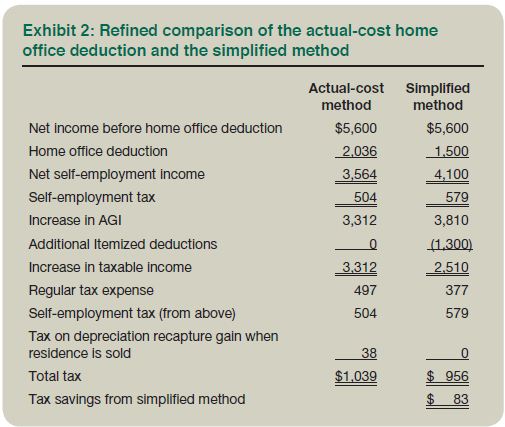 Note that the $75 increase in self-employment tax is offset by the $120 reduction in the regular income tax. Under the simplified method, there is no recapture tax when the residence is sold. The tax benefit of avoiding recapture is reduced as the number of years into the future that the gain on the sale of the residence would be recognized is increased (i.e., the present value of the tax on the recapture gain decreases as the years to the date of sale increase).

Advantages and Disadvantages of the Safe-Harbor Method: A Closer Look

The safe-harbor method to claim the home office deduction has several advantages:

The safe-harbor method also has its disadvantages:

As an example of this last point, recall that Sec. 469(i)(2) provides an exception to the nondeductibility of a net passive activity loss incurred during the tax year: The first $25,000 of losses on qualified residential rental real estate activities ­"escape" the passive basket and may offset any type of income (active or passive). However, the $25,000 maximum exception is phased out by 50 cents for every $1 of AGI exceeding $100,000. Thus, taxpayers with AGIs between $100,000 and $150,000 may lose passive deductions they would have qualified for under the actual-cost method if their AGI ­increases under the simplified method.

If an unusual Tier II expense is incurred in the current tax year, it may be preferable to use the actual-cost method for that tax year; the safe-harbor amount is not adjusted in this case.

Example 3: Due to an unusually wet spring in 2013, the ceiling and walls in taxpayer C's home office were infested with an allergy-causing mold. C spent $1,200 to have the affected areas treated and repainted. Since no tax benefit would result from this expenditure under the simplified method, C should elect to compute the home office deduction using actual costs on Form 8829, Expenses for Business Use of Your Home.

While the simplified method benefited the taxpayer in Example 1, does this result apply to all taxpayers? To answer this question, a sensitivity analysis is used to determine which taxpayers are likely to benefit the most (or the least) from the simplified method. This analysis varied the square footage of the home office, the total cost of the residence, and the marginal tax rate. The Tier I, II, and III indirect expenses were computed using the percentages shown in Exhibit 3. The house was assumed to be 3,000 square feet.

The results of the simulations are presented in Exhibit 4, Exhibit 5, Exhibit 6, Exhibit 7, and Exhibit 8.

The IRS is to be commended for offering a simple alternative to the complex home office deduction. Yet, simplicity does not always result in additional tax savings. As this analysis shows, taxpayers could save at most only a few hundred dollars by using the simplified method. The tax benefits of the simplified method decrease as the cost of the residence increases and as the taxpayer's marginal tax rate increases. For self-employed taxpayers, the increase in the self-­employment tax may negate the income tax savings from the simplified method.

If the tax return preparer charges a fee based on the number of schedules attached to the return, then omitting Form 8829 may save the taxpayer money. Thus, when the tax cost from the simplified method is a de minimis amount, say $100 or less, taxpayers should use the simplified method, since the reduction in the tax preparation fee by not having to prepare Form 8829 may offset the additional tax cost. Some taxpayers may have other issues, such as the phaseout of the passive activity rental loss limitation exception or the phaseout of certain itemized deductions, which come into play when AGI increases, that should be taken into account when deciding whether to use the simplified method. Since the results may vary by taxpayer, an Excel spreadsheet in which the taxpayer's specific information can be entered to compute the tax savings (cost) of the simplified method is available here.

6 "The study of how uncertainty in the output of a model (numerical or otherwise) can be apportioned to different sources of uncertainty in the model input" (Saltelli, et al., Global Sensitivity Analysis: The Primer §1.1.1 (John Wiley & Sons 2008)).