Families faced with financing the costs of higher education must negotiate a complex maze of rules and regulations to minimize their tax liability when using scholarships and educational credits. This complexity is only exacerbated when parents and their dependent children are preparing and filing their taxes at different times and in different locations. Additionally, the fact that obtaining the optimal tax outcome may necessitate actions that are counterintuitive to the typical taxpayer (i.e., electing to increase taxable income to save on total taxes) only serves to reinforce the need for additional professional advice and education on this important tax topic, which this article addresses.

In an effort to promote college affordability, the American Recovery and Reinvestment Act of 20091 mandated that the Departments of Treasury and Education undertake a study to coordinate the American opportunity tax credit (AOTC) and the federal Pell Grant Program. As a result, Treasury delivered the "Report to Congress on Coordinating the American Opportunity Tax Credit and the Federal Pell Grant" in May 2014.2 The fact sheet3 that accompanied the report noted that nearly 9 million U.S. taxpayers qualified for educational tax credits; however, it also noted that many taxpayers would forgo the credits because of the AOTC's complexity and because they did not understand the tax treatment of Pell Grants. In addition, Form 1098-T, Tuition Statement, through which schools report tuition and fees, and scholarships and grants, may further confuse taxpayers.

An overview of the American opportunity tax credit

The AOTC can produce a tax benefit for an individual taxpayer by creating a combination of nonrefundable and refundable tax credits totaling as much as $2,500. Under Sec. 25A, these credits are available to a taxpayer who is an eligible student or who claims a dependent who is an eligible student. Eligible students include persons who are seeking a postsecondary degree, certificate, or other recognized postsecondary educational credential and are enrolled at least part time at a qualified educational institution. They must also have not completed their first four years of postsecondary education, not claimed the credit for more than four tax years, and not have a felony drug conviction at the end of the tax year.

The credits are calculated based on required tuition, fees, and course materials (together called qualified educational expenses, or QEE) paid for by cash, check, credit card, or debit card or through loans. When the expenses are for a dependent child, the credit can be claimed on the parents' return if the parents, the child, or a third party is paying the QEE.4 The first $2,000 in QEE create a $2,000 credit, and the next $2,000 create a credit equal to 25% of QEE in excess of the first $2,000. In total, $4,000 in QEE can result in a $2,500 credit, of which the first $1,500 is nonrefundable and the remaining amount, up to $1,000, is refundable.5

Overall, this process reduces the amount of QEE that can be used to calculate the AOTC. In the fact sheet included with Treasury's report to Congress, the IRS clearly stated that taxpayers with scholarships and grants not restricted to tuition, fees, and required course materials have the option of disregarding a university's allocation. Regardless of how the school applied the scholarships and grants, the student could opt to include the Pell Grant in his or her gross income, rather than netting it against QEE, to maximize the amount of QEE used to calculate the AOTC. Likewise, any other scholarship, award, or grant that did not specifically have to be used for tuition, fees, and required course materials could be included in the student's gross income to maximize the amount of QEE included in computing the AOTC.

Including tax-free scholarships or grants in taxable income seems counterintuitive, but it may be beneficial for some taxpayers. Many scholarships and grants, including the Pell Grant, do not specify how they must be used. That is, many scholarships permit the student to use the funds for either tuition or fees or for living expenses while enrolled in school. To the extent that scholarships or grants are used for QEE, they meet the Sec. 117 test and are excludable from gross income. However, that also reduces the amount of QEE that can be used for the AOTC.

The tax planning opportunity is illustrated in detail in IRS Publication 970, Tax Benefits for Education (rev. Jan. 31, 2018). The taxpayer simply computes the tax liability or tax refund with the Pell Grant or other type of scholarship included in the income of the student receiving it. In effect, the student is designating that the scholarship or grant is being used for personal expenses, such as room and board, and is therefore reportable as gross income. Treating the scholarship or grant as being used for these expenses maximizes the amount of QEE available to compute the AOTC on the student's return, or in the case of a student who is claimed as a dependent of his or her parents, on the parents' return. The student then computes taxable income with the scholarship offsetting the QEE, which results in lower taxable income. The student is then free to use the option that minimizes the family's total tax liability.

The potential benefit of choosing to include scholarships or grants in income is not limited to low-income students and their families. Although the Pell Grant is usually considered to be primarily for undergraduate students with financial need, a Forbes article noted that it is possible to receive a Pell Grant with adjusted gross income (AGI) of $75,000 or more, especially if the family has two or more children in college at the same time.6 Additionally, the National Center for Education Statistics reports that for the 2013-2014 academic year, even students from families with incomes over $110,000 received an average of $1,834 at public colleges and $12,939 at private colleges in the form of grants and scholarships that did not have to be repaid.7 Thus, even middle-income parents may receive, or have dependent children who receive, grants and/or scholarships that create this planning opportunity. However, for some families, there is another complication: the tax on unearned income of minor children, also known as the "kiddie tax."8

The kiddie tax complication arises because scholarships included in gross income are classified as "unearned income," along with other unearned income items the student may have, such as interest, dividends, and capital gains. To the extent that unearned income exceeds $2,100, under Sec. 1(g) it may be taxed at a higher tax rate than that of the student if the student is claimed as a dependent by his or her parents. Prior to the enactment of P.L. 115-97, known as the Tax Cuts and Jobs Act, a dependent child's unearned income was taxed at his or her parents' marginal tax rate if it was higher than that of the child. With P.L. 115-97 now in effect, part of a dependent child's unearned income can be taxed at the trust and estate tax rates. While the first trust tax bracket is a modest 10%, it accelerates rapidly to 37% for taxable amounts in excess of $12,500.

The following example illustrates both the tax savings available when scholarship income is either included or excluded and the potential impact of the kiddie tax on the decision-making process.

Example: A married couple who file a joint return have earned income of $100,000 and one dependent child attending college, for which tuition and fees are $4,000 annually. The child has earned income of $10,000 from part-time and summer jobs, $1,500 in interest from an inheritance from grandparents, and received a scholarship for $4,000 that does not limit the expenditure of the scholarship funds to tuition and fees.

Alternatively, the dependent child can opt to take any portion of the $4,000 scholarship into income. Consistent with the terms of the nonrestrictive scholarship, the child is in essence allocating the scholarship to room and board or personal expenses. If the child chooses to minimize the families' total tax burden and takes $4,000 into income, the child reports AGI of $15,500 ($4,000 in unearned income from the scholarship, $1,500 in interest income, and $10,000 in earned income). The $15,500 of AGI is reduced by the 2018 standard deduction of $12,000. Although the scholarship is considered unearned income, Prop. Regs. Sec. 1.117-6(h) permits it to increase the standard deduction up to $12,000 for 2018. But, because it fails to meet the test of earned income in Sec. 911(d)(2)(A), the child's (dependent student's) unearned taxable income in excess of $2,100 is taxed at the trust and estate tax rates, which results in a tax liability of $469.

Although the child's tax liability has increased, it is more than offset by the parents' ability to reduce their taxes by taking advantage of the AOTC. The child's taxes will rise from $115 to $469 as a portion of the unearned scholarship income is taxed at the trust and estate tax rates, but the parents' taxes will decrease from $8,739 to $6,239. The parents' taxes are decreased as the AOTC is maximized by reporting $4,000 in QEE, resulting in a $1,500 nonrefundable tax credit and a $1,000 refundable tax credit. This creates a total tax decrease of $2,146 for the family unit. See the tables "Student's Alternative Tax Results" and "Parents' Alternative Tax Results" below for illustrations of the analysis. 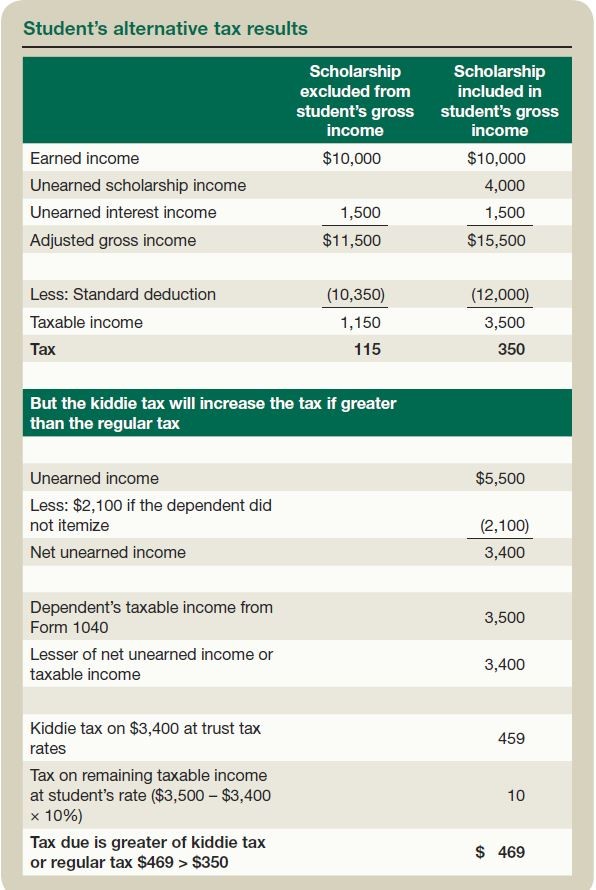 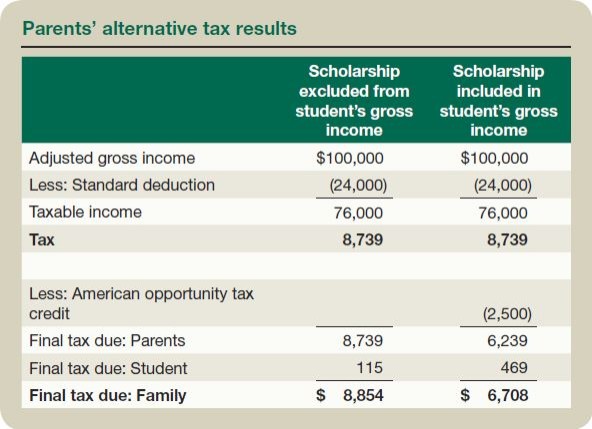 Although the IRS has succeeded in meeting the congressional mandate to coordinate the Pell Grant and education credits, the coordination results in an extremely high level of complexity for a middle-income taxpayer. Many middle-income taxpayers think that they can use tax software designed for a nonprofessional preparer to complete their returns and their dependent's return correctly. However, this self-preparation software does not adequately notify a nonprofessional user about the alternative choices for reporting scholarships on the taxpayers' or the dependent's return. This will lead taxpayers to the logical, but often less advantageous, conclusion that excluding all the potential income is the optimal choice.

As the example illustrates, a middle-income taxpayer with dependent children receiving federal or other educational financial aid may be well-advised to seek the services of a tax professional. The potential tax savings may be substantial when the tax treatment of scholarships is properly evaluated.

2Treasury Dep't, "Report to Congress on Coordinating the American ­Opportunity Tax Credit and the Federal Pell Grant" (May 5, 2014), available at www.treasury.gov.

4Although the credit can be taken by any taxpayer with a dependent who is an eligible student at a qualified educational institution, typically the taxpayers claiming it are the parents of a dependent child. Accordingly, the terms "parents" and "child" are used throughout this article.

5A refundable credit is a credit that results in a payment to the taxpayer even if he or she had no income tax liability.

8The so-called kiddie tax on children's unearned income was first introduced in the Tax Reform Act of 1986, P.L. 99-514. For a detailed discussion of the tax and its application to scholarship income, see Rubenstein, Madison, and Royalty, "The Kiddie Tax and Scholarship Income: An Analysis of the Unforeseen Tax Consequences Resulting From the Evolution and Execution of IRC 1(g) and a Roadmap for Reform," 13(2) Journal of Legal Tax Research 49 (December 2015).