How can individuals understand their taxes beyond whether their Form 1040 yields a refund or payment to the government?

A taxpayer’s completed tax return provides a great deal of information to help the taxpayer understand his or her tax picture. Supplemented with information about taxes paid that are not on the federal or state income tax form, the picture improves. The figures and average and marginal tax rates can be further enriched by comparing them to data about other taxpayers. Practitioners can provide additional information to clients to help them understand what is and is not taxed, how reform proposals might affect them, and even what happens to their tax dollars.

Both federal and state governments offer online “taxpayer receipts” to help taxpayers know, broadly, how their tax dollars are used. There are frequent proposals from lawmakers and think tanks for other types of “receipts” to provide broader context for understanding the relevance of figures on tax returns. This article reviews some of these receipts and proposals and provides a table that can be adapted by practitioners interested in providing additional tax information to clients. Clients should find this information useful in better understanding their tax picture beyond the income tax return they file, how law changes might affect them, and, broadly, where the money goes.

In 2011, the White House launched a taxpayer receipt website. This tool allows input of one’s federal income taxes paid, as well as Social Security and Medicare taxes. It then shows taxpayers how much went to broad federal expenditure categories as health care, national defense, family security, interest on the debt, veteran’s benefits, and education. Most of the broad categories can also be broken down into major subcategories. As of April 5, 2016, the website had not been updated to provide figures for 2015, only for 2014.

The Utah state government’s taxpayer receipt online tool (at transparent.utah.gov) asks individuals for their state income tax and an estimate of state sales tax. It then provides a receipt showing how the funds were used for key spending areas, such as public education, social services, and infrastructure. It also provides color circle graphs to help show the relative size of each spending category. The California taxpayer receipt tool only asks for state income taxes to create a receipt of how the funds were spent (despite the fact that many Californians pay more sales tax than income tax due to the high filing threshold for income tax).

The Taxpayer Receipt Act, H.R. 3855 (114th Congress), would add new Sec. 7529 to create a federal tax receipt. If it is enacted, it would require the IRS to send every taxpayer filing a Form 1040, U.S. Individual Income Tax Return, a receipt showing how income and payroll taxes paid are used among “major expenditure categories for the fiscal year ending in such taxable year,” as identified by the Congressional Budget Office. The 29 categories and subcategories specified would be supplemented with any others that exceed 3% of total federal outlays. The receipts could be provided electronically. In addition, the IRS website should enable taxpayers to create a receipt on their own. Similar bills have been introduced in prior sessions of Congress, such as S. 437 (112th Congress).

The tools and proposals noted above are a good start on better transparency about government spending, but more is needed, and much of it can easily be accomplished. Incorporating additional information and feedback makes the tool more than a taxpayer receipt, but a transparency tool for better understanding federal or state spending, tax preferences used, average and marginal tax rates, comparison to taxpayers in other income quintiles, and even the effect of some tax reform proposals.

Consider a federal online tool that would allow individuals to input key income and deduction items, income tax, and payroll tax. Helpful output from the online tool could include:

A comparable state tax and fiscal transparency tool would include sales and use tax, property tax, excise taxes, and other state and local taxes.

Click here for a chart (in Word document format) that practitioners can adapt to help clients better understand their federal and state taxes beyond what shows up on their income tax return.

Using the tax transparency tool, individuals can compute their average federal, state, local, and combined tax based on the year’s income. They might also want to examine these figures by recomputing income without any exemptions. They might also use the percentage to estimate the tax savings from key deductions and exemptions they claim.

The detailed income and tax information provided in the table can be used and supplemented in many ways. If there are tax proposals that clients are particularly interested in, the relevant information can be highlighted. If a deduction might be repealed, clients can easily compute the tax effect using the information in the table.

The table information can further be supplemented with data from the IRS statistics website. For example, the “SOI Tax Stats at a Glance” information can be readily used to help individuals know where their adjusted gross income level falls among other taxpayers. An excerpt from the 2015 stats follows: 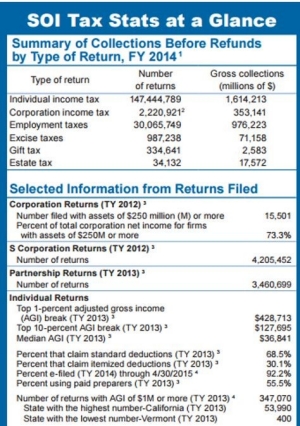 Information on tax expenditures from the Joint Committee on Taxation and tax and budget data from the Congressional Budget Office can also be helpful.

Greater transparency of tax and fiscal information is a good idea. The complexity of the numerous elements of calculating taxable income and income tax, along with the myriad other taxes individuals pay poses challenges for attaining transparency. Use of electronic data files should help in assembling the information. Should legislative proposals for taxpayer receipts gain greater attention in Congress and state legislatures, the proposals will be broadened to provide more information, such as that noted in this article. In the meantime, many clients should find it helpful to have an option of obtaining greater detail of their tax picture from their tax advisers. Hopefully, the tax transparency tool can serve as a helpful starting point.

Annette Nellen, Esq., CPA, CGMA, is a tax professor and director of the MST Program at San José State University. She is an active member of the tax sections of the AICPA, ABA, and California State Bar. She is a member of the AICPA Tax Executive Committee and Tax Reform Task Force. She has several reports on tax policy and reform and maintains the 21st Century Taxation blog .

Assessment statutes of limitation and the Sec. 965 transition tax

Planning for an IPO: Is your tax department prepared?